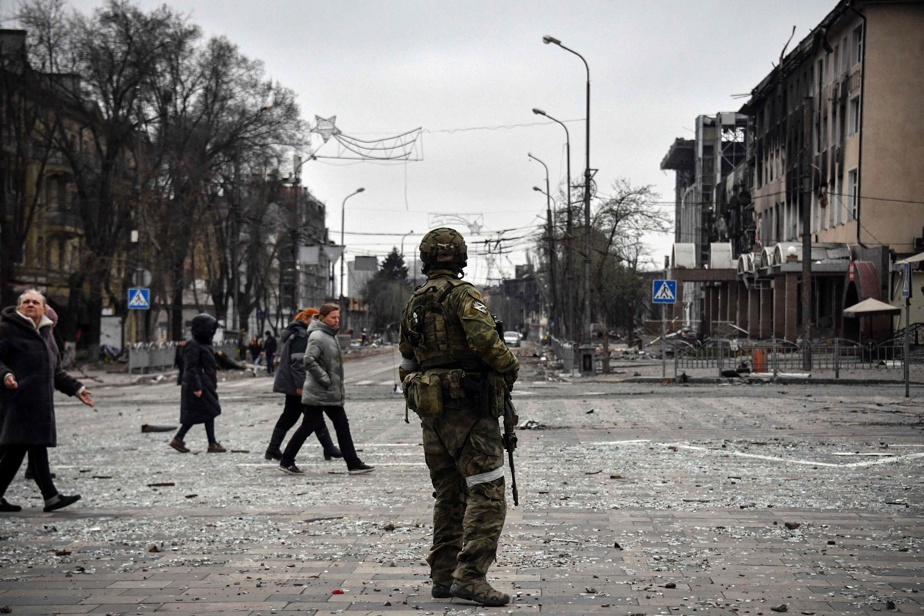 (Kramatorsk) Russian forces continued their offensive on Wednesday to bring down Mariupol, in southeastern Ukraine, where at least 20,000 people have already been killed according to Kyiv, in a country now a “crime scene” according to the prosecutor of the International Criminal Court.

Some “1026 Ukrainian soldiers from the 36and marine infantry brigade voluntarily laid down their arms and went “to the area of ​​the Ilyich metallurgical plant, of which 150 were injured and were taken care of, the Russian Defense Ministry said.

Taking Mariupol would be an important victory for the Russians, as it would allow them to consolidate their coastal territorial gains along the Sea of ​​Azov by linking the Donbass region, partly controlled by their supporters, to the Crimea that Moscow has annexed in 2014.

Between 20 and 22,000 people died in the city, Pavlo Kirilenko, Ukrainian governor of the Donetsk region, told CNN on Tuesday, while admitting that it was “difficult to talk about a number of victims”, the city being cut off from the rest of the world by Russian forces.

If some military experts consider its fall inevitable, Ukrainian forces cling and continue to resist the Russians after more than six weeks of fighting, which is now concentrated in the gigantic industrial zone of the city.

Russian aerial bombardment of Mariupol continued, targeting in particular the port and the vast Azovstal metallurgical complex, the Ukrainian army said on Telegram on Wednesday.

This labyrinth, transformed into a bastion by the Ukrainian forces who entrench themselves there in its kilometers of underground passages, promises a fierce battle for total control of the city.

On the ground, AFP journalists embarked with the Russian forces in Mariupol saw the charred ruins of this city that the Ukrainians say “90% destroyed”.

Since the beginning of the week there have been rumors, so far unconfirmed, of the use of chemical weapons by Russian forces in Mariupol.

According to US Secretary of State Antony Blinken, “Russian forces could (y) use different riot control agents, including tear gas mixed with chemical agents” against “Ukrainian fighters and civilians”. Moscow says for its part that “the threat of chemical terrorism” comes from the Ukrainians.

The bombardments also continue in the east of the country. They have killed seven people in the past 24 hours in Kharkiv (northeast), also besieged by the Russians since the start of the invasion, the regional governor announced on Wednesday.

Kyiv has called on civilians to flee east as soon as possible amid fears of an imminent major Russian offensive for full control of Donbass, which Ukrainian forces and their pro-Russian separatist enemies have shared since 2014.

But Ukraine will not open any humanitarian corridors on Wednesday as the Russians ‘blocked buses’ and ‘violate the ceasefire’ in some areas, making the situation ‘dangerous’, an official said Wednesday morning. of the government.

Analysts believe that Russian President Vladimir Putin, mired in the face of fierce Ukrainian resistance, wants to secure a victory in this region ahead of the May 9 military parade in Red Square marking the Soviet victory over the Nazis in 1945.

Moscow had withdrawn at the end of March its forces which occupied the surroundings of Kyiv and besieged the northern half of the capital, saying that it now wanted to concentrate its efforts on the south and the east.

Around Kyiv as elsewhere, the Ukrainian authorities say they continue to find corpses every day in areas from which Russian forces withdrew in late March.

Ukraine is a “crime scene”, judged Wednesday the prosecutor of the International Criminal Court (ICC), the Briton Karim Khan, during a visit to Boutcha, near Kyiv, a city symbol of the atrocities of the conflict since Hundreds of bodies, according to Ukrainian authorities, were found there in late March.

“We have good reason to believe that crimes within the jurisdiction of the Court are being committed,” Mr. Khan told reporters in this city, where the Ukrainians accuse the Russians of having “massacred” the civilians.

Vladimir Putin, whose country denies any abuse in Ukraine, on Tuesday called these accusations “fake”.

Karim Khan clarified that an ICC forensic team was preparing to work in Ukraine “so that we can really separate truth from fiction”.

On Tuesday, the body of the mayor of Gostomel, near Kyiv, who died on March 7, was exhumed in front of Ukrainian investigators, as part of a war crime investigation. His body was hoisted from its grave, and the police filmed each of his wounds, including one to the head, according to AFP journalists present on the spot.

In video: In Gostomel, near Kyiv, the mayor and other victims of “war crimes” are exhumed


In a village in the south of the country neighboring Kherson, a town close to the front line, seven people were shot by Russian soldiers, the Ukrainian prosecutor’s office announced on Wednesday. According to him, Russian soldiers shot them in a house which they then blew up to cover up the crime.

In Dnipro, the major industrial city in the east, the city’s deputy mayor, Mikhail Lyssenko, announced that the bodies of more than 1,500 Russian soldiers collected from the region lay in the city’s morgues. “Nobody wants to recover” these remains, he said, hoping that “Russian mothers can come and pick up their sons” soon.

The Kremlin recently admitted “significant losses”, then recognized at the end of March the death of 1,351 soldiers for 3,825 wounded, the first figures for more than three weeks.

In Washington, Joe Biden for the first time accused Vladimir Putin of “genocide” in Ukraine, a term mainly used so far by Ukrainian President Volodymyr Zelensky, who praised on Twitter the “real words of a real leader”.

Claiming that “evidence was mounting” of “horrific things the Russians did in Ukraine”, the Democrat predicted that the world would “find even more of the devastation”.

Accusing Russia of genocide in this way is “unacceptable”, Moscow replied.

“Such attempts to distort reality are unacceptable, especially since they come from the President of the United States, a country whose actions in recent history are well known,” said Kremlin spokesman Dmitry Peskov. .

Volodymyr Zelensky continues for his part to demand “urgently more heavy weapons” to “avoid more Russian atrocities”. He still earnestly hopes that German Chancellor Olaf Scholz will come to Kyiv, from whom he expects deliveries of heavy weapons quickly, said one of his advisers, Oleksiï Arestovitch, on Wednesday.

The Ukrainian president also called on Europe on Wednesday to act more quickly against Russia, saying that “we can either stop Russia or lose all of Eastern Europe”.