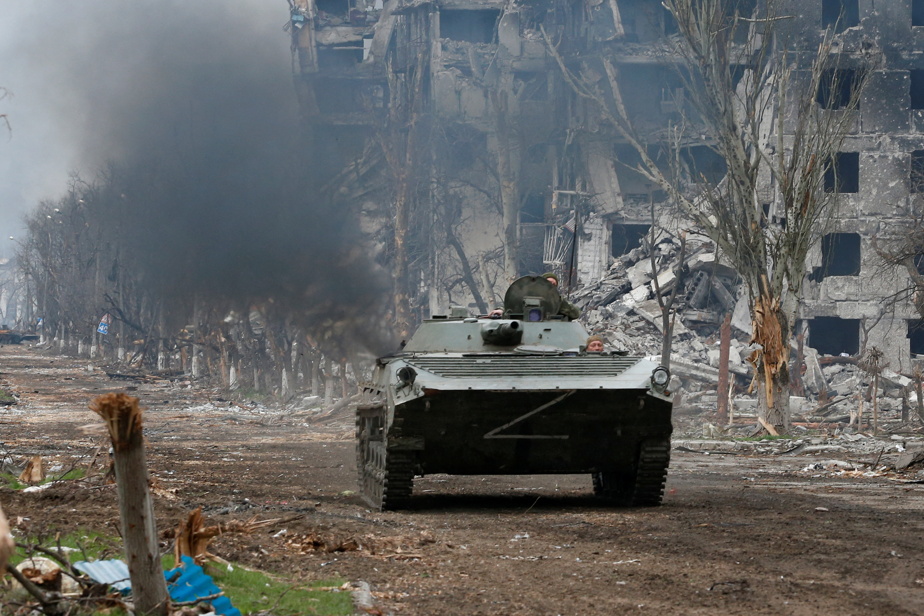 (Severodonetsk) Russia on Wednesday threatened to strike command centers in Kyiv, accusing Ukraine of attacks on its territory, while the United States announced the supply of heavy military equipment to the Ukrainians.

At the same time, the UN considered that a “general ceasefire” for humanitarian purposes did not seem “at present possible”, the United Nations still awaiting responses from Moscow to concrete proposals for the evacuating civilians and ensuring the delivery of basic necessities to war zones.

“We are seeing sabotage attempts and strikes by Ukrainian forces on targets on the territory of the Russian Federation,” said Igor Konashenkov, spokesman for the Russian Ministry of Defense.

“If such events continue, strikes will be carried out by the Russian army on decision-making centers, including in Kyiv, which the Russian army has refrained from doing so far”, a- he warned.

In Mariupol, in the south-east of Ukraine, “the remnants of the Ukrainian units and the Nazis (of the regiment) Azov present in the city are blocked and deprived of the possibility of leaving the encirclement”, has also assured Mr. Konashenkov.

Shortly before, Russia had announced the surrender of more than a thousand Ukrainian soldiers in this very strategic port city that its forces have been besieging and bombarding for more than 40 days.

The capture of Mariupol would be an important victory for the Russians as it would allow them to consolidate their coastal territorial gains along the Sea of ​​Azov by linking the Donbass region, partly controlled by their supporters, to Crimea which Moscow annexed in 2014.

If some experts consider its fall inevitable, Ukrainian soldiers continue to resist, the fighting now being concentrated in the gigantic industrial zone of this city, of which between 20 and 22,000 of the inhabitants have perished in total, according to the regional administration.

Russian aerial bombardment of Mariupol continued, targeting in particular the port and the vast Azovstal metallurgical complex, the Ukrainian army said on Wednesday.

This labyrinth, transformed into a bastion by the Ukrainian soldiers who took refuge in its kilometers of underground passages, promises a fierce battle.

“Units of the 36and brigade of the national navy in Mariupol have managed, after a complex and very risky maneuver, to join the Azov regiment”, for his part affirmed Wednesday on Facebook Oleksiï Arestovitch, an adviser to Ukrainian President Volodymyr Zelensky.

“The city’s defense system has thus been strengthened and expanded,” he added.

On the spot, AFP journalists embarked with the Russian forces saw the charred ruins of this city that the Ukrainians say “90% destroyed”.

Since the beginning of the week there have been rumors, so far unconfirmed, of the use of chemical weapons by the Russians in Mariupol.

According to US Secretary of State Antony Blinken, “Russian forces could (y) use […] including tear gas mixed with chemical agents against “Ukrainian fighters and civilians”. Moscow, for its part, claims that “the threat of chemical terrorism” comes from the Ukrainians.

It is in this context that Joe Biden on Wednesday promised Volodymyr Zelensky new military aid from the United States of $800 million.

This will be “very effective equipment that we have already delivered” to Ukraine, as well as “new capabilities”, which includes “artillery systems” and “armoured means of transport”, specified the executive, who says he has also given the green light to the transfer of helicopters.

Russia meanwhile announced on Wednesday that 398 members of the United States Congress would be banned from entering its territory, in retaliation for a similar measure taken by Washington.

“There are no more doctors”

The bombardments also continue in the eastern part of Ukraine, where they have caused the death of seven people in the past 24 hours in Kharkiv, a city in the northeast also besieged by the Russians since the start of the invasion.

Kyiv called on the population of these regions to flee as soon as possible for fear of an imminent major Russian offensive for full control of Donbass, which Ukrainian troops and their pro-Russian separatist enemies have shared since 2014.

Ukraine, however, warned it would not open any humanitarian corridors on Wednesday as the Russians “blocked buses” and “violated the ceasefire” in some areas, making the situation “dangerous”.

Analysts say Russian President Vladimir Putin, mired in the face of fierce Ukrainian resistance, wants to secure a victory in Donbass ahead of the May 9 military parade in Red Square marking the Soviet victory over the Nazis in 1945.

In this regard, the head of one of the two pro-Russian separatist “republics” unilaterally proclaimed in this vast mining territory, Leonid Passetchnik, affirmed on Wednesday that his troops now controlled “80 to 90%” of the Luhansk region, one priority targets of the Kremlin.

In Severodonetsk, the most eastern city still held by the Ukrainian army, where strikes were heard, “there are no more doctors, no nurses and all the pharmacies are closed”, said a 70-year-old man told AFP.


Moscow said at the end of March that it would henceforth concentrate its efforts on the south and the east.

Ukraine has become a veritable “crime scene”, judged on Wednesday in Boutcha, near Kyiv, the prosecutor of the International Criminal Court, the Briton Karim Khan.

“We are here because we have good reason to believe that crimes within the jurisdiction of the Court are being committed. We must pierce the fog of war to reach the truth,” he told the press in this locality that has become the symbol of the atrocities of the conflict. And this since hundreds of bodies, according to the Ukrainian authorities, were discovered there at the end of March, Russia for its part denying any abuse in Ukraine.

Around the capital as elsewhere, the Ukrainian authorities say every day that they find corpses in the areas from which the Russians have withdrawn.

In a village in the south of Kherson, a city close to the front line, seven people were shot by Russian soldiers in a house which they then blew up to conceal the crime, denounced the Ukrainian general prosecutor’s office on Wednesday.

In Dnipro, in the east, deputy mayor Mikhail Lyssenko said the bodies of more than 1,500 Russian soldiers that “nobody wants to recover” lay in morgues in this large industrial city.

In Washington, Joe Biden for the first time on Tuesday accused Vladimir Putin of “genocide” in Ukraine.

A term that Canadian Prime Minister Justin Trudeau echoed the next day, unlike German Chancellor Olaf Scholz and French President Emmanuel Macron, whose refusal was described as “very hurtful” by Mr Zelensky.

Polish and Baltic heads of state meanwhile visited Borodianka, a small Ukrainian town near Kyiv on Wednesday that was the scene of alleged abuses when it was occupied by the Russians

And they were received for a “working lunch” in the capital by Mr. Zelensky, who for his part called on Europe to act more quickly against Moscow.