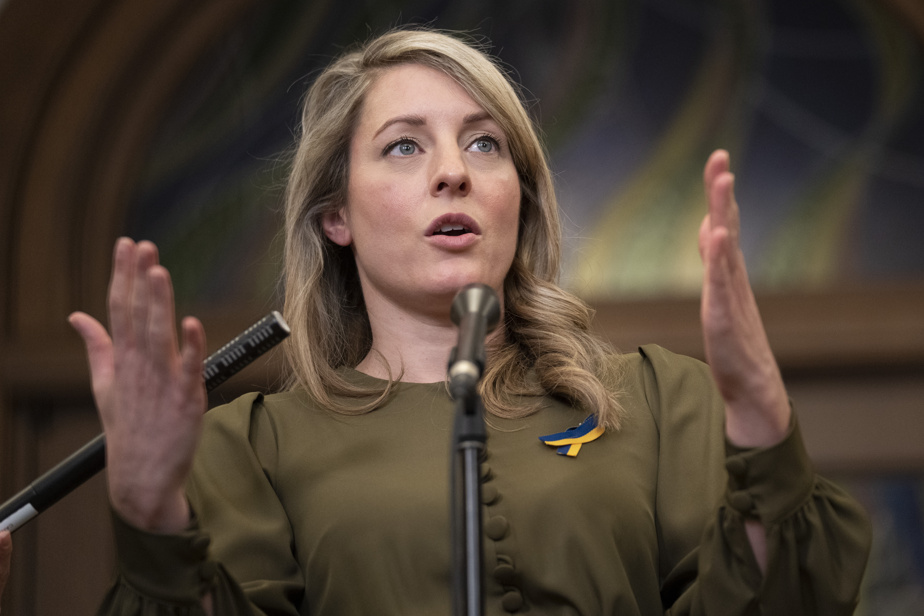 (Ottawa) The geopolitical changes caused by the Russian invasion of Ukraine represent a challenge for Canada, but they also bring their share of opportunities, underlined the Minister of Foreign Affairs, Mélanie Joly.

“The world has changed since February 24, global geopolitics has changed and we are gradually becoming aware of the impacts,” she said in an interview with Professor Stéphane Roussel of the School. National Public Administration (ENAP) which followed a speech by the Minister on Monday at a luncheon organized by the Council on International Relations of Montreal.

The event was briefly interrupted by a demonstrator who was dragged out of the room by a security guard.

Asked about the boomerang effect of sanctions against Russia in Canada, Ms.me Joly recalled that they were aimed at “economically, politically, diplomatically, socially isolating” the regime of President Vladimir Putin in order “to put maximum pressure”.

Canada imposed sanctions on more than 1,000 Russian and Belarusian individuals and entities, banned imports of crude oil from Russia, closed its airspace and waters to Russian planes and boats. Russia was also excluded from the SWIFT international banking transaction system.

“At the same time, it certainly creates opportunities for Canada from an economic point of view, but also challenges,” she said.

The minister gave the example of Australia’s decision to end its bauxite exports to Russia. “20% of all the aluminum that is made in Russia comes from Australian bauxite, so that definitely has an impact on our aluminum smelters here,” she explained. It creates an opportunity. »

Potash mined in Saskatchewan could replace potash from Russia. “Sweden, Belgium and Brazil knocked on our door because normally their potash comes from Belarus or even Russia,” she added.

And Quebec’s expertise with hydrogen could be useful to Germany, which is looking for new energy sources to replace the natural gas it buys from the Russians.

Minister Joly made no mention of the natural gas that could be exported from Canada to Europe. The Conservatives see it as a development opportunity for the oil and gas industry. The elected officials will have to vote Monday afternoon on a motion by MP Michael Chong for the government to authorize the construction of new gas pipelines to the Atlantic Ocean.

One of the great global repercussions of the war in Ukraine, “one of the breadbaskets of the whole world”, will be food. Russia is the world’s largest seller of wheat and Ukraine the fifth, according to the Food and Agriculture Organization (FAO) of the United Nations. The UN agency estimates that “8 to 13 million additional people” could thus suffer from malnutrition this year.

“It will certainly affect a large part of the Middle East and Africa,” said Mr.me Pretty. So for us, as a country which is a major cereal producer, it will be important that we play our part because otherwise there will certainly be imbalances that will be created in different regions of the world. »

The fact that 141 of the 193 member countries of the United Nations voted earlier this month for a resolution demanding an end to the war in Ukraine gives him hope. “We see that there is a movement which aims precisely to isolate Russia because we know that when we accept that a country invades another […], it creates a significant threat to all countries in the world because there is no longer any respect for international law, sovereignty and territorial integrity. »

She hopes that China “will play its role” in the UN Security Council “not to worsen the conflict”.