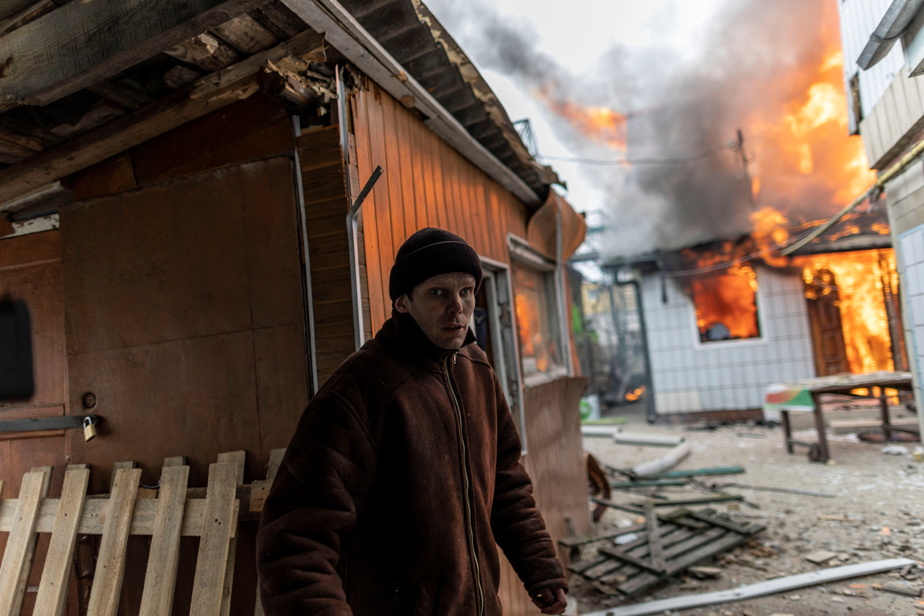 (Kyiv) Ukraine refused on Monday to evacuate civilians threatened by advancing Russian troops to Russia, a Russian proposal described as “cynical” by Paris, but was to meet the opposing side in the afternoon to a new round of negotiations on humanitarian issues.

On the twelfth day of the Russian invasion, Moscow announced the establishment of local ceasefires and the opening of humanitarian corridors to allow the evacuation of civilians from several cities in Ukraine, including the capital Kyiv, that the he Russian army has surrounded, and Kharkiv, the country’s second largest city, in the east, under heavy fire for several days.

But half of these corridors join Russia or Belarus, from which the Russian army also entered Ukraine on February 24, and were immediately rejected by the Ukrainian government.

“This is not an acceptable option,” said Ukrainian Deputy Prime Minister Iryna Vereshchuk.

“All of this is not serious, it is moral and political cynicism, which is unbearable to me”, added French President Emmanuel Macron, one of the rare Western leaders who continue to exchange with the master of the Kremlin, Vladimir Putin .

According to the Russian army, the decision to open humanitarian corridors was taken after a “personal request” from the French president to his Russian counterpart and local ceasefires did start at 7 a.m. GMT.

The Russian representative to the talks between Moscow and Kyiv, Vladimir Medinsky, accused Ukraine of preventing the evacuation of civilians from combat zones and of “using them directly and indirectly, including as human shields, which is good certainly a war crime”.

Russians and Ukrainians were nevertheless to meet around 2 p.m. GMT, at the Polish-Belarusian border, for a third round of negotiations devoted to humanitarian corridors. The previous two rounds did not yield any concrete results.

The humanitarian corridors, the principle of which had been negotiated during the second round on March 3, have notably remained a dead letter. Two evacuation attempts have thus failed in Mariupol (southeast), a besieged port city on the Sea of ​​Azov.

An evacuation route from Mariupol was “mined”, the director of operations of the International Committee of the Red Cross (ICRC), Dominik Stillhart, said on Monday, stressing the difficulty of “bringing the two parties to a concrete agreement , actionable and accurate”.

After heavy bombardments overnight from Sunday to Monday, the fighting temporarily decreased in intensity due to “enormous losses” on the Russian side, said Ukrainian Defense Minister Oleksiï Reznikov.

But Russian forces are preparing for a “new round of attacks”, he said. “In the first place Kyiv, Kharkiv, Cherniguiv (north) and Mykolayev (south)”, he specified.

In the capital Kyiv, where the offensive is expected in the coming days, the tension is maximum.

“The capital is preparing to defend itself”, launched the mayor of Kyiv and former boxing champion Vitali Klitschko on Telegram. “Kyiv will hold! Will fight back! Let’s dress together! Glory to Ukraine! “, he shouted.

Ukrainian forces stand ready to destroy the last bridge linking Kyiv to its western hinterland to halt the advance of Russian tanks.

In Irpin, on the outskirts of Kyiv, an unofficial humanitarian corridor has been set up, allowing thousands of residents of the city that has fallen into Russian hands to flee via a makeshift bridge, then a single route secured by the army, volunteers and a system of shuttles.

Children, the elderly – some carried on carpets serving as stretchers – and families abandon strollers, suitcases too heavy to rush into buses and vans.

“I’m so happy I made it through, it’s going to be okay now,” said Olga, 48, who went through the evacuation route with her two dogs.

Ukrainian President Volodymyr Zelensky also warned that Russia was preparing to bomb Odessa, a strategic port on the Black Sea.

Education Minister Sergiy Shkarlet said 211 schools were damaged in the shelling. Briton JK Rowling, author of the famous Harry Potter saga of children’s novels, has launched an appeal for donations to help children trapped in orphanages, promising to bring up to one million pounds sterling (1.2 million euros).

Diplomacy is also trying to regain its rights, with an announced meeting of Russian Foreign Ministers Sergei Lavrov, Ukrainian Dmytro Kouleba and their Turkish counterpart Mevlüt Cavusoglu Thursday in Turkey. Kyiv has yet to confirm its participation, however.

But hopes of success are slim, Vladimir Putin continuing to set as a precondition for any dialogue Kyiv’s acceptance of all of Moscow’s demands, in particular the demilitarization of Ukraine and a neutral status for the country.

Germany, very dependent on Russian hydrocarbons, is however opposed to such a scenario. These imports are “essential” for the “daily life of citizens” in Europe and the supply of the continent cannot be assured otherwise at this stage, warned Olaf Scholz.

The escalation of the conflict and these new prospects for sanctions have continued to drive up oil prices. The barrel of Brent from the North Sea came close to 140 dollars, close to the absolute record.

In the process, the Tokyo and Hong Kong stock markets fell by 2.94% and 3.87%. In Europe, after dropping 4% at the opening, they recovered as the new round of Russian-Ukrainian talks approached.

As Russia is increasingly isolated on the international scene, China assured it of its friendship, “solid as a rock”, and outlined “tremendous prospects for future cooperation”.

The Russian government has established a list of countries “hostile” to Russia, to which Russian individuals and companies can repay their debts in rubles, a currency whose value has lost 45% since January.