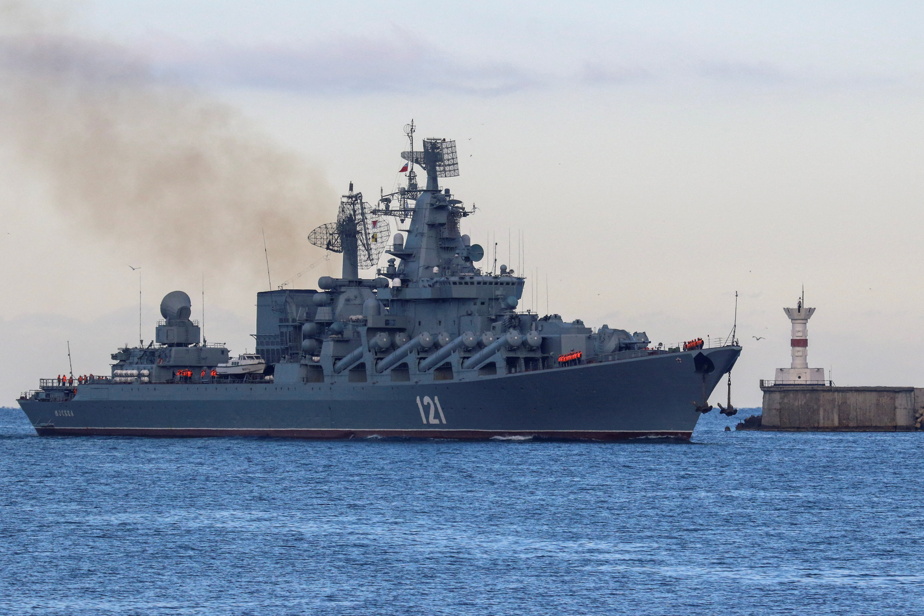 (Odessa) Russia has suffered one of its biggest material setbacks since the start of the invasion of Ukraine, the cruiser Moskvaflagship of the Black Sea Fleet, having been “severely damaged” by an explosion of munitions according to Moscow, and by missile strikes according to Kyiv.

In Washington, US President Joe Biden promised his Ukrainian counterpart Volodymyr Zelensky massive new military aid of $800 million, including heavy equipment that the US has so far been reluctant to deliver to Kyiv for fear of to further aggravate their tensions with Moscow and to be considered parties to the war.

This comes as Russia has threatened to strike command centers in Kyiv, accusing Ukraine of attacks on its territory.

As the Russian military is poised to take control of the strategic port of Mariupol on the Sea of ​​Azov and expand its offensive into southern and eastern Ukraine, the guided-missile cruiser Moskva was “severely damaged”, according to the Russian Defense Ministry, quoted by state agencies Ria Novosti and Tass.

“Due to a fire, ammunition exploded on board”, and the crew was fully evacuated, the ministry said, adding that an investigation was underway to determine the origin of this fire.

The Ukrainian authorities, for their part, affirmed that the Moskva had been hit by missiles.

An adviser to the Ukrainian president, Oleksiy Arestovich, said on YouTube that “a surprise has come to the flagship of the Russian Black Sea Fleet”.

“He burns with intensity. Now. And with this rough sea, it is impossible to know when they will be able to receive help,” he said, assuring that “510 crew members” were on board.

The cruiser Moskva participated in the first days of the invasion in an attack on Serpents’ Island, located in the Black Sea near the Romanian border, during which 19 Ukrainian sailors were captured. They had subsequently been exchanged for Russian prisoners.

“We don’t understand what happened,” he added.

the Moskva was commissioned from the time of the Soviet Union in 1983 and took part in the Russian intervention in Syria from 2015.

In the early days of the invasion of Ukraine, he took part in an attack on Serpents’ Island, near the Romanian border, in which 19 Ukrainian sailors were captured to be exchanged for prisoners. Russians.

In a phone call Wednesday with Mr. Zelensky, Joe Biden announced the shipment to Kyiv of a large amount of equipment from US military stocks and including artillery, armor, radar, anti-tank missiles and drones and unmanned coastal defense vessels, according to a White House statement.

“We are seeing sabotage attempts and strikes by Ukrainian forces on targets on the territory of the Russian Federation,” said Igor Konashenkov, spokesman for the Russian Defense Ministry.

“If such events continue, strikes will be carried out by the Russian army on decision-making centers, including in Kyiv, which the Russian army has refrained from doing so far”, a- he warned.

Russian forces withdrew from the Kyiv region at the end of March. For a month, they tried to encircle the capital, in vain, and carried out strikes there.

Mr. Konashenkov also announced on Wednesday that the Mariupol commercial port area had been completely conquered.

Shortly before, Russia had announced the surrender of more than a thousand Ukrainian soldiers in this strategic port city that its forces have been besieging and bombarding for more than 40 days.

Taking Mariupol would be an important victory for the Russians, as it would allow them to consolidate their coastal territorial gains along the Sea of ​​Azov by linking the Donbass region, partly controlled by their supporters, to the Crimea that Moscow has annexed in 2014.

If some experts consider its fall inevitable, Ukrainian soldiers continue to resist, the fighting now being concentrated in the gigantic industrial zone of this city.