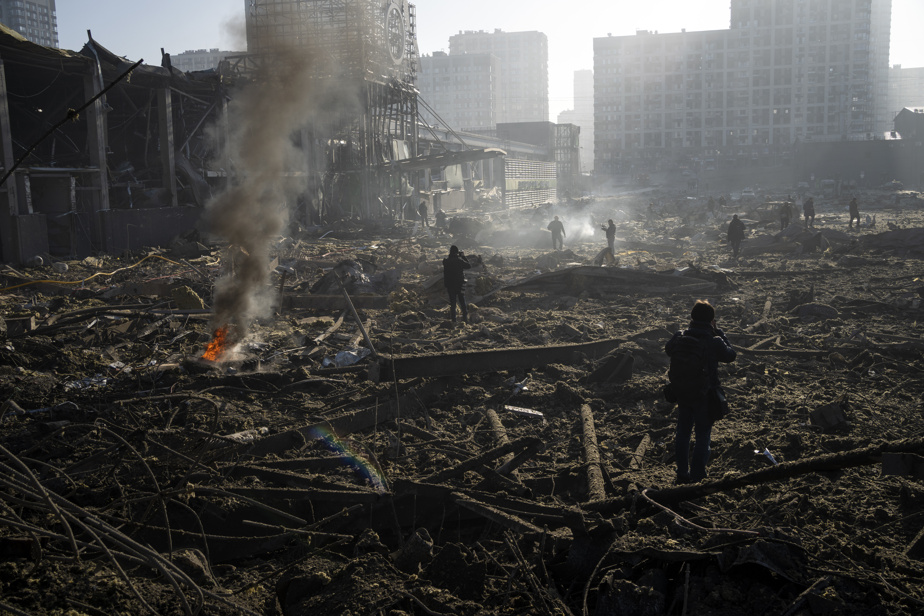 (Kyiv) Ukraine on Monday rejected the Kremlin’s ultimatum demanding the surrender of the beleaguered city of Mariupol, as a new bombardment in Kyiv left at least eight people dead, devastating the surroundings of a shopping center in the capital. .

“There is no question of talking about surrender or laying down arms. We have already informed the Russian side about this,” Ukrainian Deputy Prime Minister Iryna Vereshchuk told the Ukrayinskaya Pravda newspaper. “It is a deliberate manipulation and a real hostage-taking”.

The Russian Defense Ministry had called on Ukraine to “lay down its arms” and demanded a “written response” to its ultimatum which expired on Monday morning, in the name of safeguarding the inhabitants and infrastructure of the city of Mariupol.

“We call on the official authorities in Kyiv to be reasonable and cancel the instructions given previously, which obliged the militants to sacrifice themselves and to become ‘martyrs of Mariupol’”, had launched Mikhail Mizintsev, director of the Russian National Center for defense management.

According to Mizintsev, Russia and Ukraine agreed on a route for Mariupol residents to reach Kyiv-controlled territory on March 21. “From 10 a.m. Moscow time […] Russia is opening humanitarian corridors from Mariupol to the East, and in agreement with the Ukrainian side, to the West”, detailed Mr. Mizintsev.

“The occupiers continue to behave like terrorists,” replied Iryna Vereshchuk on Telegram. “They say they agree (to establish a) humanitarian corridor and in the morning they bombard the place of evacuation. The government is doing everything possible. The most important thing for us is to save the lives and health of our citizens”.

According to local authorities, Russian soldiers forcibly transported around 1,000 residents to Russia, depriving them of their Ukrainian passports – a possible war crime.

“350 children will be forcibly taken to Russia without allowing us to collect them,” she said, asking the Russian authorities to tell them “in which orphanage” they will be placed, and “why”. “It’s terrorism,” she repeated.

The Deputy Prime Minister called for priority to be given to a humanitarian corridor, allowing around 350,000 people still stranded in Mariupol to leave.

Russian forces are also still trying to encircle Kyiv, the Ukrainian capital, where a bombardment on a shopping center on the night of Sunday to Monday, caused the death of at least eight people, according to the general prosecutor’s office.

Bodies of victims were lying Monday morning in front of the Retroville shopping center in northwest Kyiv, an AFP journalist noted, while firefighters and soldiers were busy in the rubble to search for other victims.

The very powerful strike pulverized vehicles and left a gaping crater several meters wide in the parking lot in front of a charred and still smoking ten-storey building. Debris, destroyed vehicles, twisted scrap, littered the stage for hundreds of meters.

“Enemy fire” caused a fire on several floors of the shopping center located in the Podilsky district, had for their part previously specified the emergency services on Facebook.

In the north of the country, the regional governor of Sumy, Dmytro Zhyvytsky, reported an “ammonia leak” in the facilities of the Sumykhimprom company, affecting an area of ​​2.5 kilometers around the plant, which produces fertilizer.

The extent and cause of the incident are unclear, but residents have been told to seek refuge in basements or low-rise buildings to avoid exposure.

Russia’s Defense Minister said on Sunday evening that “nationalists” had “mined” the ammonia and chlorine storage facilities in Sumykhimprom “with the aim of massively poisoning the inhabitants of the Sumy region, in the event of a ‘entry into the city of units of the Russian armed forces’.

Biden in Poland on Friday

Shortly before, the White House announced that US President Joe Biden will travel to Warsaw on Friday to meet his Polish counterpart and discuss the Russian invasion. She said Mr Biden would go to Belgium beforehand to meet leaders of NATO, the G7 and the European Union.

The southern port city of Mariupol is a central target in Vladimir Putin’s war in Ukraine. It forms a land bridge between Russian forces in Crimea to the southwest and Russian-controlled territory to the north and east.

The predominantly Russian-speaking city has been under heavy shelling from Russian forces since the invasion began on February 24.

The Consul General of Greece in Mariupol, who organized several evacuations of Greek nationals, compared this city to Guernica or Aleppo, on his arrival in Athens on Sunday.

“Mariupol will be on the list of cities in the world that have been completely destroyed by war, such as Guernica, Stalingrad, Grozny, Aleppo…” Androulakis told reporters at the airport.

According to the military administration of the Donetsk region, Mariupol has become “a ghost town”.

“Currently, more than 80% of the city’s infrastructure is damaged or destroyed. Of this 80%, about 40% is not recoverable,” detailed Pavlo Kirelenko, a manager.

The United Nations has described the humanitarian situation in the city as “extremely serious”, with “residents facing critical and life-threatening shortages of food, water and medicine”.

In an interview broadcast by CNN, the Ukrainian president said he was “ready for negotiations” with the Russian president. “I’ve been ready for the past two years and I think that without negotiations, we won’t stop the war”.

He had previously denounced the bombardment of the Mariupol art school, destroyed by Russian strikes while 400 people – women, children and the elderly – were refugees there according to local authorities.

During the night from Sunday to Monday, Ukrainian President Volodymyr Zelensky estimated that Jerusalem “would be the right place to find peace”.

“Israeli Prime Minister Naftali Bennett is trying to find a way to negotiate with Russia and we are grateful to him. For all his efforts, so that sooner or later we can start the discussion with Russia. Maybe in Jerusalem. This is the right place to find peace. If possible,” the head of state said in a video posted on Telegram.

The United Nations has estimated that around 10 million Ukrainians have fled their homes, of whom around a third have gone abroad, mainly to Poland.