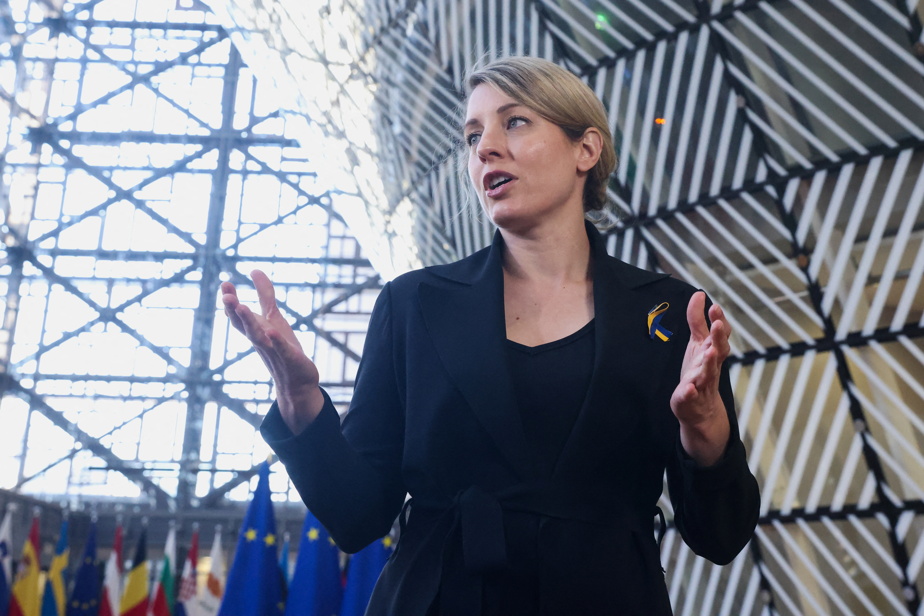 (OTTAWA) Canada’s foreign minister met her counterparts at NATO headquarters in Brussels on Friday to coordinate ongoing efforts to impose sanctions on Russia for its invasion of Ukraine.

Before this meeting, Mélanie Joly said that the ministers planned in particular to discuss the Russian attack against a major nuclear power plant in Enerhodar, in eastern Ukraine.

Russian troops seized the power plant, Europe’s largest, after a midnight attack that set it ablaze and briefly sparked global fears of a nuclear disaster.

Firefighters extinguished the blaze and no radiation was emitted, UN and Ukrainian officials said, as Russian forces continued their week-long offensive on multiple fronts and the number of refugees fleeing the country now exceeded 1.2 million.

Mme Joly wrote on Twitter on Friday that she had spoken to the director general of the International Atomic Energy Agency to discuss the situation at the nuclear power plant. “We call on the Russian regime to stop threatening nuclear sources,” she wrote. Countless civilian lives are endangered by these irresponsible acts. »

Prime Minister Justin Trudeau said Thursday evening that he had spoken with Ukrainian President Volodymyr Zelensky about the “horrible attacks” at the nuclear power plant.

After the attack, President Zelensky again called on the West to impose a no-fly zone over Ukraine. But Atlantic Alliance Secretary General Jens Stoltenberg ruled out that possibility, citing the risk of a much wider war in Europe.

He said the only way to implement a no-fly zone would be to send NATO planes to enforce it by shooting down Russian planes.

“We understand the desperation, but we also believe that if we did, we would end up with something that could end in a full-fledged war in Europe,” Stoltenberg said.

Trudeau defended the decision not to implement a no-fly zone. “What we have avoided so far, and what we will continue to avoid, is bringing NATO forces into direct conflict with Russian soldiers,” he said on Friday. It would be an escalating level which is unfortunate. »

In a bitter and moving speech, Ukrainian President Volodymyr Zelensky criticized NATO for refusing to impose a no-fly zone over Ukraine as Russia stepped up its air attack.

“All the people who die from this day forward will also die because of you, because of your weakness, because of your lack of unity,” he proclaimed in a nightly speech. The alliance gave the green light to the bombing of Ukrainian towns and villages by refusing to create a no-fly zone. »

“All the alliance was able to do today was get 50 tonnes of diesel fuel through its supply system for Ukraine. Maybe so we can burn the Budapest memorandum,” Zelensky added, referring to security guarantees given in 1994 to Ukraine in return for the withdrawal of its Soviet-era nuclear weapons.

“You will not be able to pay us with liters of fuel for the liters of our blood shed for our common Europe,” he continued.

He said the Ukrainians will continue to resist and have already destroyed Russia’s plans for a lightning invasion “after enduring nine days of darkness and evil”.

“We are warriors of light,” he concluded. The history of Europe will remember it forever. »

This refusal to impose a no-fly zone on Ukrainian territory reveals a deep incomprehension of the seriousness of the situation in which the world finds itself, for her part estimated Alexandra Chyczij, national president of the Ukrainian Canadian Congress.

“Russia’s genocidal war against the Ukrainian people is not only a war against Ukraine. If Putin wins in Ukraine, the rest of Europe and the world will be threatened by his regime, Ms.me Chyczij. Russia is indiscriminately bombing Ukrainian civilians, deliberately murdering innocent people. »

Ukrainian President Zelensky will meet with US senators in a videoconference on Saturday morning, according to a person familiar with the matter at the Ukrainian Embassy.

All senators are invited to the call, according to the source, who requested anonymity. It will be the first time they have met with the Ukrainian president since Russia invaded his country.

The appeal will come as Congress considers a request for $10 billion in emergency funding, with the money earmarked for humanitarian aid and security needs in Ukraine.