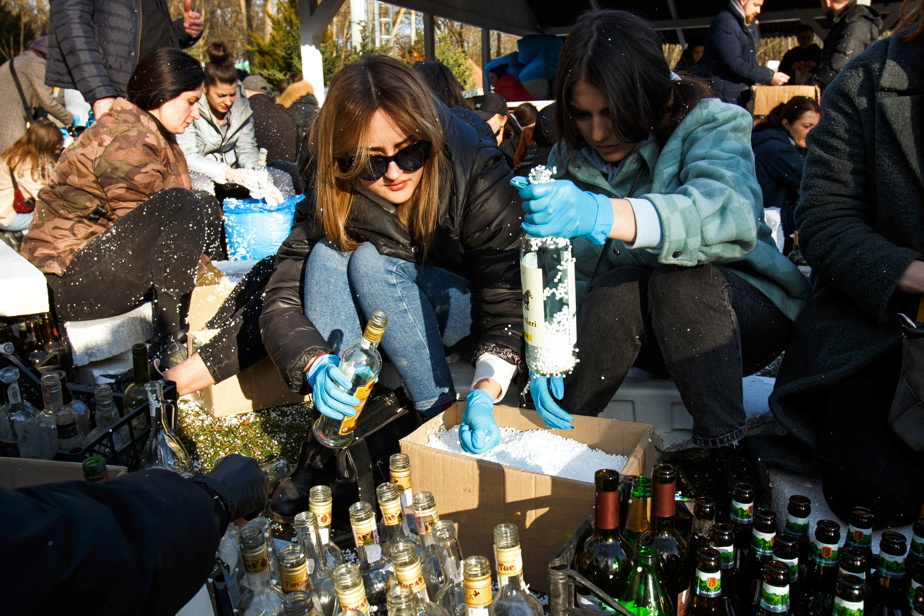 (Kiev) On the side of the roads of Kiev, billboards are now calmly scrolling, under a sparkling sun, the same message in Russian: “Russian soldiers, fuck you! ” Pause. “Do not become assassins”. Pause. ” Go home ! “.

From their trenches and barricades erected in a few days, the inhabitants of the Ukrainian capital assured Monday that they were ready to “teach the lesson” of their lives to the enemy.

An old Lada, two dumpsters, an old wardrobe: in another street, the inhabitants took everything that came to hand to erect makeshift barricades, hoping to slow down the progress of Russian tanks.

“The only flowers they will receive from us will be for their graves,” adds the 30-year-old, who went out for supplies when the curfew was lifted at 8 a.m. Monday (1 a.m. EST).

This short respite, thanks to ongoing negotiations between the two countries on the Belarusian border, leaves a window of opportunity for the inhabitants of Kiev, after the shock of the first offensives on their city, to organize their defense.

“Don’t go on the grass,” a young man shouts to passers-by as an anti-air raid siren begins to sound.

“There could be explosives!” We have heard that the Russians are hiding mines in the grass,” explains Oleksiy Vasylenko.

At the checkpoints, where all vehicles are checked, people greet each other with “Glory to Ukraine! » to which we answer « Glory to the heroes! “, patriotic formula which now also serves as a pass. Another driver adds a “Death to Muscovites!” and restarts with a bang.

The battalions of Ukrainian soldiers, busy repelling the Russian offensive at the gates of Kiev, are still rare in the capital itself. But the “territorial defense” volunteers, armed civilians, held the fort.

Dropped off by bus, dozens of them have just been called to set up a strategic point of defense in the Obolon district, in the north of Kiev, already targeted by Russian strikes.

At the foot of Soviet-era apartment towers, their gear stored in a children’s play area, a unit of uniformed volunteers now evolves in a landscape of war.

Along the sidewalk, a maze of trenches two meters deep was dug. At the entrance to the device, a construction machine lifts and positions concrete blocks suspended from hooks.

Yuri Gibalyouk, 50, a civilian veterinarian, came to join the fighting with his brother Andreïi and assures that Kiev has “enough resistance fighters” to repel Vladimir Putin’s soldiers. “If I have to kill 100, I will,” said this volunteer with the long gray beard, his Kalashnikov on his stomach.

Another team is crouched over boxes filled with beer bottles. Inside, “one-third diesel, two-thirds gasoline”, a rag wick “and boom! “, explains the volunteer dedicated to the preparation of Molotov cocktails.

Among them, Andrïi Ivanyouk, who already has the synthetic phrasing and the menacing gaze of a fighter. This successful actor and director from Kiev, who brought his wife and child to safety in the west before returning to Kiev to fight, assures that the Russians will receive “the lesson of their life”.

“Russia is not at home here, it never has been,” said the 30-year-old positioned at the bottom of a trench, promising: “our land will be their tomb.”