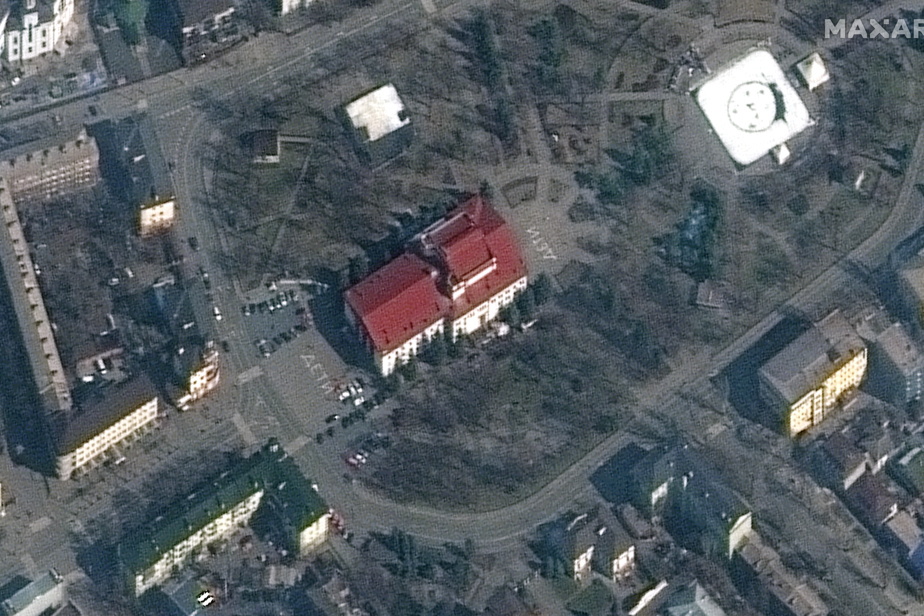 (Kyiv) Ukrainian authorities said Russia on Wednesday destroyed a theater in which more than a thousand people had taken refuge in the besieged city of Mariupol, the human toll remaining at this stage undetermined.

“The invaders destroyed the Dramatic Theater. A place where more than a thousand people had taken refuge. We will never forgive this, ”said the municipality on Telegram messaging.

The American space technology company Maxar Technologies, which specializes in particular in satellite imagery, published on Wednesday a photo of the Mariupol Drama Theater taken on Monday according to it.

According to the photo seen by AFP, the word “children” was written on the ground, in huge white letters and in Russian, in front and behind the building.

The town hall of Mariupol published for its part on Telegram a photo of the theater showing its central part completely destroyed, with thick white smoke billowing from it. According to the authorities, it was a plane that dropped a bomb on the building.

“The plane dropped a bomb on the building […]. It is impossible to establish the balance sheet in the immediate future, because the bombardments of the residential districts continue, ”indicated the town hall.

“The entrance to the shelter is blocked with debris. Information about the victims is being verified,” she said.

The Russian Ministry of Defense for its part denied having bombed the theater, blaming the explosion on the account of the Ukrainian nationalist battalion Azov.

Moscow had already blamed this military unit during the bombing of the Mariupol maternity hospital last week, which sparked an international outcry.

“It is impossible to find the words to describe the level of cynicism and cruelty with which the Russian invaders are annihilating the peaceful inhabitants” of Mariupol, the town hall was indignant in its press release.

Earlier in the day, the Ukrainian army had already announced that the Russian army had bombarded civilians fleeing Mariupol on Wednesday in a humanitarian corridor, causing “deaths” and injuries, including a seriously injured child.

A convoy of civilians en route from Mariupol to Zaporozhye was targeted by Grad multiple rocket launcher fire around 3:30 p.m. (9:30 a.m. ET), the Ukrainian military said on Monday. Telegramposting the photo of an injured and bloodied child.

After a series of failures, for lack of a Russian-Ukrainian ceasefire, evacuations have accelerated in Mariupol, while in this strategic port, the inhabitants lack water and food.

More than 2,000 civilians have died in Mariupol besieged and shelled for days, according to local authorities.