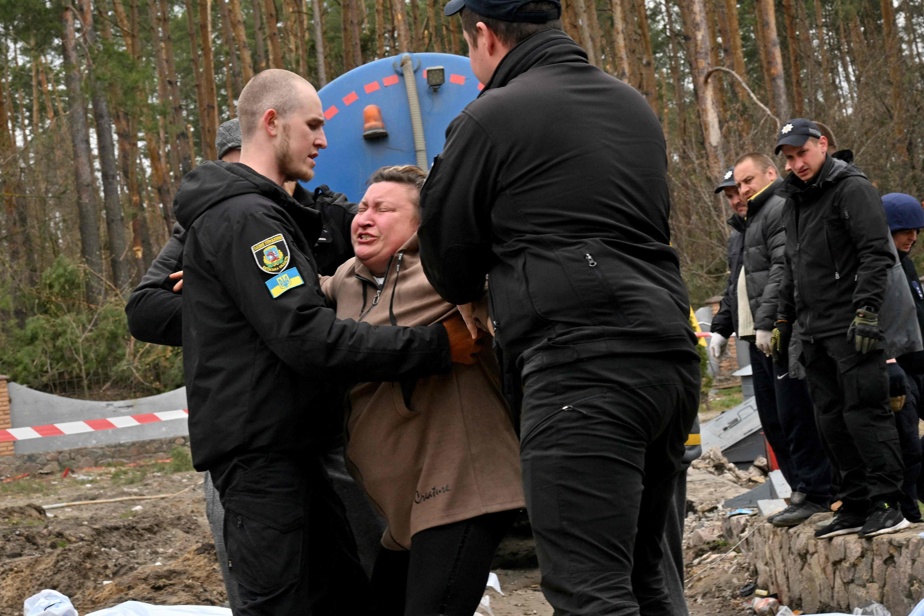 (Makariv) Kneeling on the ground, near a gas station pulverized by a bombardment fifteen kilometers from Kyiv, Lioudmila mourns her 23-year-old son, whose body she has just discovered in a pit.

Very close to the village of Bouzova, in a hole dug in the ground, the body of Yevgueni, like that of another man at his side, is deformed by water, covered in mud and hidden by a army sleeping pad.

But his mother recognized him right away by his shoes. “I’m not leaving here,” she repeats, clutching the rubble around her.

Not far away, watch over the remains of two tanks torn apart by the fighting. On one of them, a V has been painted in white, a symbol of the Russian forces which invaded Ukraine on February 24 and which withdrew from the Kyiv region for more than a week.

Since Russian President Vladimir Putin ordered his troops to put an end to an offensive against the capital, the Ukrainian authorities have regained control of the neighboring villages, accusing the Russians of having committed “massacres” there.

Images of 20 dead bodies in civilian clothes on a street, one with their hands tied behind their backs, in Boutcha, northwest Kyiv, have gone viral, with Ukrainian authorities denouncing a “war crime “.

The Kremlin, for its part, claimed that it was a “staging” orchestrated by the Ukrainians.

In other villages near the capital, other scenes of abuses are discovered as they are taken over by the Ukrainian army. On Sunday, the country’s judiciary said that 1,222 people had been killed in the Kyiv region since the start of the invasion, without specifying whether they were only civilians.

In Bouzova, one of the representatives of the village Lioudmila Zakablouk assures that Evgueni as well as his companion in misfortune were members of the Territorial Defense Forces, a reserve unit of the Ukrainian army. They had been missing since March 16.

“My heart is so heavy”, sighs Mme Zakablok. ” How awful ! How is it possible to do such things? »

If the cause of death of the two men could not be established immediately, traces of blood smeared the head of one of them.

The execution of prisoners of war is prohibited by the Geneva Convention.

After water was siphoned into the pit by a tanker truck, police wrap red and white tape around the hole. Then a man dives inside.

Using a thin white rope, each body is reassembled. That of Lioudmila’s son is the lightest, but nine men are still needed to hoist it out of the pit.

All around, it’s spring. A drone buzzes around one of the destroyed tanks. Birds fly in and out of the looted gas station store, their carefree chirping reaching the police.

But the grieving mother’s cries of pain resonate even louder.

As Evgueni has just been taken out of the hole, she rushes towards him. “Let me see it,” she pleads. ” I want to see him. »

This time, it takes four men to hold her back.