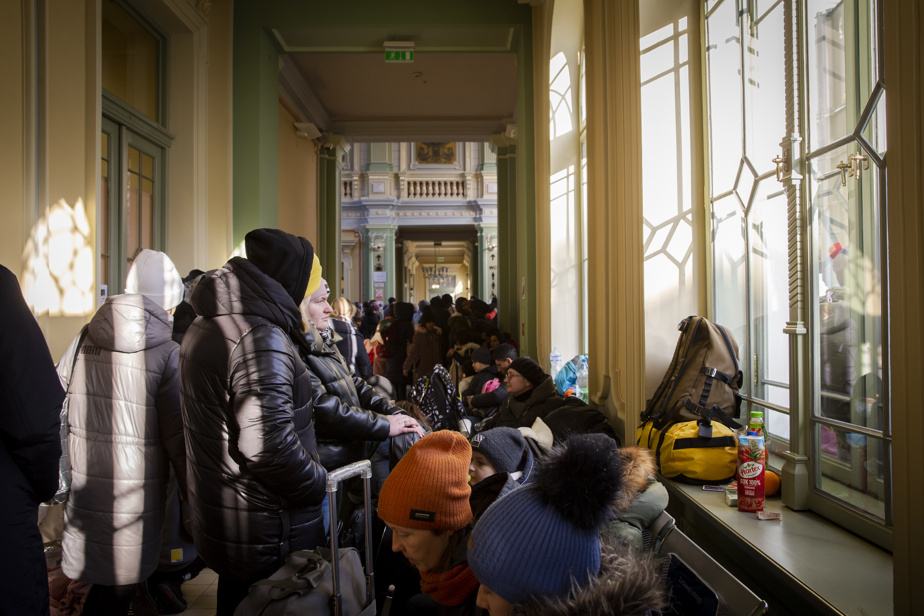 (Ottawa) The unprecedented sanctions already imposed on Russia by Canada and its allies have failed to stop the invasion of Ukraine. However, there are other levers to activate, assured Chrystia Freeland on Tuesday, while acknowledging that they could hurt the Canadian economy. In the meantime, the federal government has responded to the appeal of the United Nations and will contribute 100 million for humanitarian aid.

“We all really understand that we can’t fail,” Ms.me Freeland referring to all of the G7 democracies. Ukrainian Finance Minister Marchenko Serhii took part in a meeting held by his counterparts earlier in the day and shared with them his ideas for attacking Vladimir Putin’s regime.

Minister Freeland did not want to dwell on the new sanctions that the G7 countries intend to impose soon, but she indicated that the government was reviewing the assets held by Russian oligarchs and companies in Canada. “It’s all on the table,” she said.

“I have to be honest with Canadians: there could be collateral damage in Canada,” she admitted, adding that this is under discussion. For sanctions to be effective and have an impact, we are going to have to be prepared to suffer the consequences in our own economies. »

The New Democratic Party is calling for new sanctions to be imposed on Belarus. The Conservative Party believes that Canada should outright expel the Russian ambassador to Canada and the Bloc Québécois has demanded that the government commit to maintaining the sanctions until the last Russian soldier leaves Ukraine.

“We will keep the sanctions in place until Russia recognizes that it made a monumental mistake and withdraws its military from all of Ukraine,” Prime Minister Justin Trudeau said during question period.

The latter discussed the war in Ukraine on Tuesday with the President of South Africa, Cyril Ramaphosa, whose country is a member of the G20.

Sanctions against Russia have been stepped up by Canada and its allies since the Russian invasion of Ukraine began on Feb. 24, but they have failed to halt President Vladimir Putin’s offensive.

Canada responded to an appeal by the United Nations on Tuesday asking its members to donate a total of $1.7 billion to provide clothing, food and housing for Ukrainians. The $100 million in Canadian aid will also give them access to health care, including trauma care.

The UN estimates that around 12 million people inside the country and more than 4 million refugees in neighboring countries will need humanitarian assistance in the coming months.

“We want to be flexible and adapt to the situation on the ground and we will continue to work with the United States and the European Union to coordinate any additional assistance,” Sajjan said as he left the cabinet on Tuesday. .

National Defense Minister Anita Anand said Canada will provide 1,600 new bulletproof vests and nearly 400,000 individual meal packets to Ukrainians in combat. This is in addition to the lethal and non-lethal aid already announced.

For François Audet, director of the Canadian Observatory on Crises and Humanitarian Action at the University of Quebec in Montreal, Canada must prioritize humanitarian aid over military aid.

“Humanitarian investment through NGOs, through the United Nations, gives us significant added value, will prevent us from falling into a trap for which we have little capacity and will also prevent us from causing anything through NATO,” he explained.

He points out that the war risks ending with a reconstruction and peacekeeping operation, in which Canada already has expertise. “What is taking shape is an operation over several years, he said. Russia will not withdraw from the territories it will have won, Ukraine will have to make compromises — there will be a division of the territory, as we saw somewhat in the Kosovo-Bosnia scenario which took years to calm down. »

Canada then played an important role in peacekeeping with the blue helmets and in the reconstruction of democratic institutions.

Transport Minister Omar Alghabra announced on Twitter Tuesday that Canada is closing its waters and ports to vessels “owned by Russian interests or registered in Russia.” However, this is more of a symbolic measure since few of these ships dock in the country. Canada wants to apply the same sanctions as its allies to try to stop the invasion of Ukraine. The British government had announced on Monday the prohibition of the ports of the United Kingdom to the ships under the Russian flag. However, this measure could be difficult to apply. On Sunday, Canada had closed its airspace to commercial flights from Russia, and on the same day a flight from Russian airline Aeroflot violated the ban. An administrative investigation has been opened by the Ministry of Transport which could be severe. With Agence France-Presse