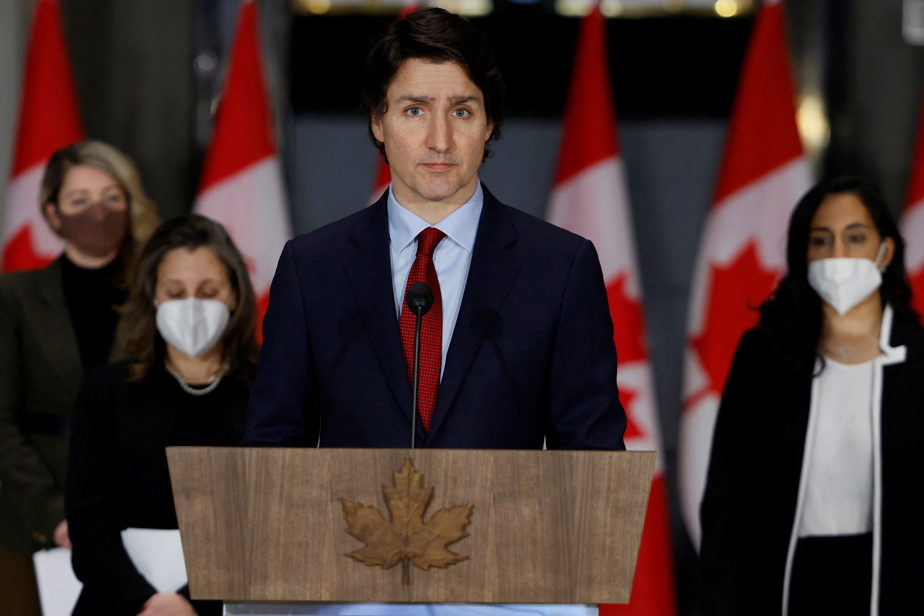 (Ottawa) Canada imposes new sanctions on Russia in response to Vladimir Putin’s attack on “democracy, international law and freedom.” Are targeted Russian elites, members of the Security Council of Russia, and the Ministers of Defense, Finance and Justice.

They arrived looking solemn, and they didn’t mince words.

An act of “barbarism”, a “fabricated war” by a leader who “lied with impunity” to his people in order to justify the attack launched at dawn on Thursday, which jeopardizes the world order in place since the Second World War.

Added to this is the cessation of the issuance of export permits to Russia as well as the freezing of existing ones. And these retaliatory measures will be “far reaching”, because they “will entail great costs to the Russian elites with complicity” and “will limit the ability of President Putin to continue financing this unjustified invasion”, insisted the Canadian prime minister.

Minister Anand said 3,400 members of the Armed Forces were “ready” to serve if NATO allies needed support. She insisted, however, that – just as Jens Stoltenberg, the secretary general of the political and military alliance said earlier today – “we don’t have combat missions, and that has to be clear. for our country and our armed forces.

Since Ukraine is not a member of NATO, the organization has no obligation to respond militarily to an attack. Article 5 of the treaty provides that “if a NATO country is the victim of an armed attack, each member of the Alliance will consider this act of violence as an armed attack directed against all the members and will take the necessary measures which he deems necessary to come to the assistance of the attacked country”.

“I explained to him firmly, straight in the eye, exactly what the position of the Government of Canada was regarding the invasion of Ukraine by Russia, and therefore, the message was well understood. […] But you must understand, of course, that the bond of trust between Canada and Russia is broken as we speak,” she explained at a press conference.

She did not say whether there were plans to deport the Kremlin’s head of mission to Ottawa.

Canada’s chief diplomat also announced that employees of the Canadian embassy in Ukraine, who had already been moved west, from Kiev to Lviv, had to move again. They were sent to Poland “due to the security situation in Ukraine”.

She spent the morning talking with international partners, including her Ukrainian counterpart, Dmytro Kouleba, to whom she promised that the Canadian government would ensure that “severe sanctions [seraient] imposed”.

The Prime Minister also mentioned that Canada had concluded an agreement with neighboring countries, such as Poland, Slovakia, Hungary, Romania and Moldova, so that Canadians and permanent residents of Canada who are in Ukraine can cross the border safely.

Canada “also gives priority to immigration applications from Ukrainians who wish to come to the country,” added Justin Trudeau. A telephone line has also been created for people who are here or abroad and who have questions to ask about immigration in connection with Ukraine, he underlined.

In a statement, the UN Refugee Agency assured that it was working “with the authorities, the UN and other partners in Ukraine and is ready to provide humanitarian assistance wherever necessary and possible. “.

The UN agency “is also working with the governments of neighboring countries, calling on them to keep borders open to those seeking safety and protection”, and it says it is ready “to support everyone’s efforts to respond to any situation of forced displacement. “.

All opposition parties in Ottawa have strongly denounced Russia’s invasion of Ukraine.

“Putin’s despicable aggression and invasion of Ukraine is unacceptable. His attack on the Ukrainian people and their democratically elected government is despicable,” interim Conservative Party leader Candice Bergen said in a statement.

“Autocrats like Putin must and will be judged harshly. Conservatives stand ready to defend the rules-based international order against these serious violations of international law,” she added.

New Democratic Party (NDP) leader Jagmeet Singh also strongly condemned “President Putin’s blatant aggression” and urged the Trudeau government to do everything to cut off the regime’s funding, including by working with its allies, to Russia’s withdrawal from the SWIFT banking network.

He also insisted that Canada should open its doors to Ukrainians driven out of their country by Moscow’s military offensive.

“In the days to come, the Ukrainian people will need our support more than ever, Canada must have a humanitarian aid plan. Canada must continue to work with its allies, including the United Nations, to respond appropriately to this dire situation,” he said.