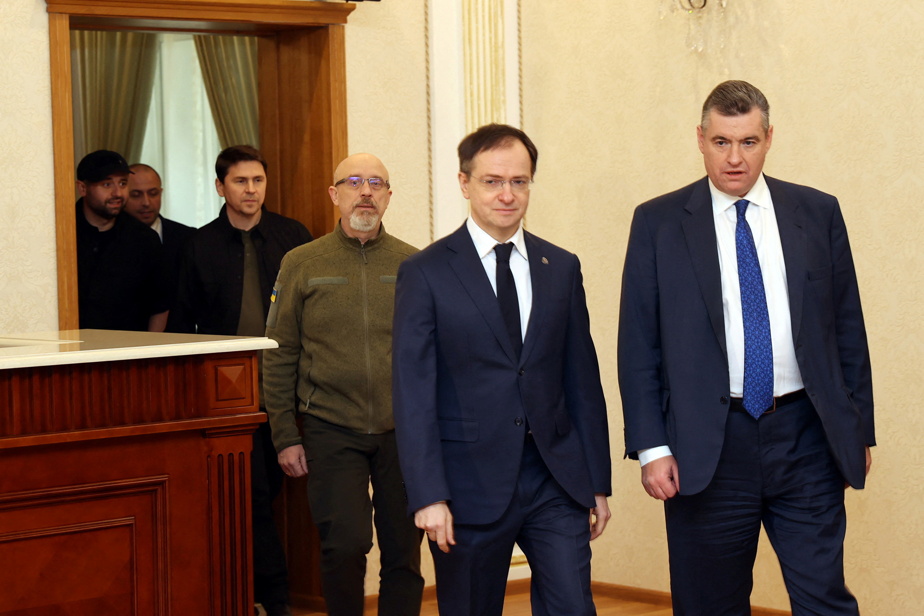 (Kiev) Recognition of Crimea as Russian territory, demilitarization and “denazification” of Ukraine: Vladimir Putin laid down his conditions on Monday for stopping the Russian invasion of Ukraine, while initial talks took place Russian-Ukrainians and intense fighting was taking place in Kharkiv, the country’s second city.

Shortly after, the Russian and Ukrainian delegations, which had been negotiating since 11 a.m. GMT on the Ukrainian-Belarusian border for the first time since the start of the Russian attack on Thursday, separated for consultations.

It was not known if this interruption was related to the statements of the Russian president. But the two parties agreed to meet “soon” for a second round.

Vladimir Putin addressed these demands during an exchange with his French counterpart Emmanuel Macron, the current president of the European Union.

A settlement of the conflict “is only possible if Russia’s legitimate security interests are taken into account without conditions”, the Kremlin repeated after their conversation, adding that it hoped that the negotiations “would lead to the expected results”.

Emmanuel Macron did not immediately comment on these requirements. The Elysée simply let it be known that the French president had asked Mr. Putin to stop the strikes against civilians and to secure the roads in Ukraine. And assured that the latter had “confirmed his desire to commit”.

Because, on the ground, the negotiations did not lead to a respite in the fighting, although the Ukrainian presidency had announced, before their opening, that it would demand “an immediate ceasefire and the withdrawal of the (Russian) troops ) of Ukrainian territory”.

The start of the talks coincided with intense fighting for Kharkiv (north-east), close to the Russian border.

At least 11 people were killed in Russian shelling of residential areas, according to the regional governor, who said he feared there were “dozens of deaths”.

An AFP photographer saw the lifeless bodies of two Russian soldiers in front of a school in ruins, not far from the center of this city of 1.4 million inhabitants.

In the capital Kiev, the situation seemed calmer on Monday, after a weekend under curfew. But many were preparing for a new Russian assault.

The city bristled with makeshift barricades and public electronic signs warned the Russians that they would be greeted “by bullets.”

In the absence so far of a major victory for the Russian army, Vladimir Putin had taken a new step on Sunday in the threat of widening the conflict, which many fear will become the most serious in Europe since 1945.

While Russia has the largest number of nuclear warheads in the world, he said he had put its nuclear forces on “special alert” in the face of “belligerent NATO statements” and “illegitimate” sanctions imposed to Russia.

Measures to support the ruble

On Monday, the master of the Kremlin also ordered shock measures to support the ruble, which was touching historic lows against the dollar and the euro after the announcement of new European and American economic sanctions.

Many Russians were beginning to withdraw their bank savings and residents of Russia will no longer be able to transfer currency abroad from Tuesday. Russian exporters will have to convert into rubles 80% of their income earned in foreign currencies since 1er January.

Previously, the Russian Central Bank had announced to raise its key rate by 10.5 points to 20%.

A response to the new sanctions announced by the Europeans over the weekend, with the exclusion of several Russian banks from the Swift international interbank system and the ban on all transactions with the Central Bank of Russia. Measures that even Switzerland, despite its attachment to neutrality and its banks highly prized by Russian oligarchs, has announced to resume in their “entirety”.

The United States announced a similar sanction on Monday, so the Central Bank is expected to have all of its assets frozen in the EU and the United States.

Russia also closed its doors on Monday to airlines from 36 countries, including many European ones, after the Europeans closed their airspace to Russian companies.

If the European countries are for the most part members of the Atlantic Alliance – which announced that it would not send troops to Ukraine – they also announced on Sunday unprecedented measures of military support for Kiev: the release of 450 million euros to finance arms deliveries and the dispatch of combat aircraft.

After numerous demonstrations against the Russian invasion around the world this weekend, a new rally took place in Germany on Monday: some 250,000 people marched in Cologne, transforming the traditional Carnival parade into a mobilization against the war.

In this context, US President Joe Biden was due to meet again with his allies from 4:15 p.m. GMT, to coordinate their response to the Russian attack.

The conflict has thrown ever-increasing numbers of refugees onto the roads.

Since the invasion began on Thursday, more than 500,000 Ukrainians have fled to neighboring countries, the UN High Commissioner for Refugees said on Monday. The EU said it expected more than seven million displaced people.

Most of it goes to Poland. But Romania, Slovakia and Hungary – all members of NATO – are also concerned.

Despite his stance against migrants, Hungarian Prime Minister Viktor Orban relaxed asylum rules and Hungarians flocked to the Ukrainian border to offer bowls of goulash, offers of accommodation and comfort.

From Russia, the departures of Westerners should also accelerate. The United States recommended Monday to their nationals to leave the country immediately, after Italy and Belgium.

The outcome of five days of conflict remains uncertain.

The Russians, meanwhile, gave no figures.

The 193 members of the UN General Assembly held a rare “emergency special session” in New York devoted to the conflict. Calls to end the war multiplied there, while Ukraine and Russia were virulently opposed to the podium.

“The fighting in Ukraine must stop,” insisted UN Secretary General Antonio Guterres. ” Enough is enough. Soldiers must return to their barracks,” he added.

France was to submit a resolution on humanitarian aid to Ukraine to the Security Council. Russia has a right of veto there which excludes any official condemnation of the offensive.