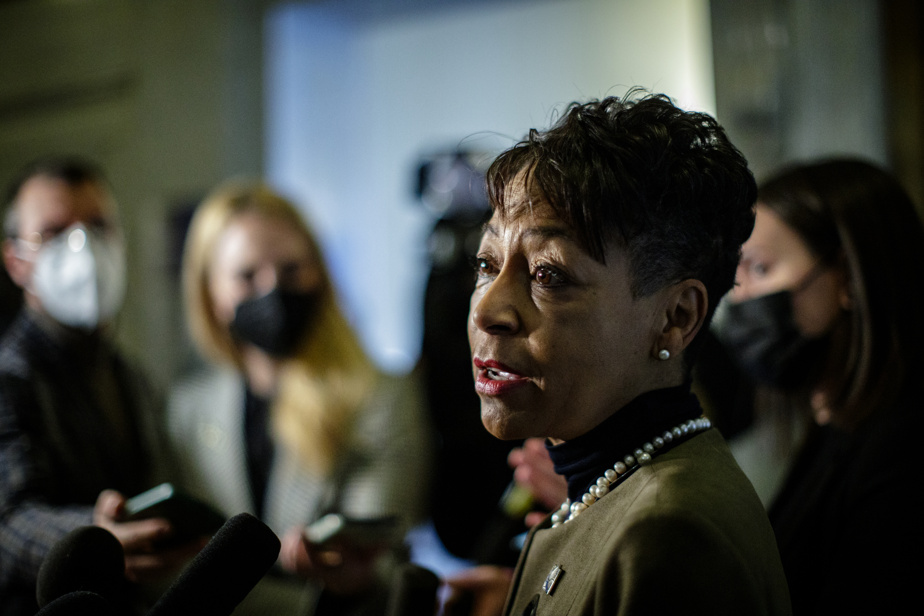 (Quebec) Quebec opens its door to Ukrainian refugees and promises to support “100%” the decisions that the Trudeau government will take in its response to the regime of Vladimir Putin. The Legault government is also preparing for an even bigger rise in inflation.

The Legault government is already preparing to welcome Ukrainian refugees, confirmed Thursday the Minister of International Relations, Nadine Girault. “It can be humanitarian aid, solidarity. We can also release funds,” briefly listed the minister. Obviously, it is still too early to know how many refugees Quebec could welcome.

The Prime Minister also confirmed that Quebec will do its part to help refugees during “the months to come”. In a Facebook post, François Legault “strongly condemned Russian aggression in Ukraine”. Mr. Legault is in Maniwaki Thursday to make an announcement there in the afternoon.

“We are really wholeheartedly with the Ukrainian community this morning. What happened last night is appalling,” added Nadine Girault, denouncing the invasion of Ukraine by Russian troops. “The values ​​of sovereignty is a value that is important to us. It is a value of international law and Vladimir Putin did not respect that. It’s amazing what he did,” she added.

What he did, Vladimir Putin, was he disguised a war as a peace mission. That’s exactly what he did. This is unacceptable, it makes no sense.

The Legault government has indicated that it stands “100%” behind the Trudeau government’s future decisions. “The federal government will decide how it will respond at the level of Canada and we will support this decision,” said Ms.me Girault without wanting to venture on the options of Canada. Quebec is not asking Russian diplomats to leave the province either.

“A dark day for democracy”

The opposition parties all expressed their solidarity with the Ukrainian people on Thursday. “It’s a dark day for democracy in the West,” lamented the parliamentary leader of the Parti Québécois, Joël Arsenault. “What we want is for NATO and the countries of Europe and North America to come together and impose the strongest sanctions, for them to react in such a way as to denounce this invasion which is going to obviously against international law,” he added.

“We are witnessing extremely, extremely disturbing scenes,” reacted the parliamentary leader of Québec solidaire, Gabriel Nadeau-Dubois. “These are scenes that have not been seen since the Second World War. An attack, like that, of a sovereign country, of a democratic state, is unprecedented. It is unprecedented for my generation, it is unprecedented since the Second World War in Europe and it is extremely worrying, then it is, of course, inadmissible”, he continued speaking “of an unacceptable aggression from Russia.

On Wednesday, the National Assembly expressed with one voice all its sympathy for the Ukrainian people, who are under threat from Russia, by unanimously adopting a motion of support and solidarity proposed by the Member for Québec solidaire for Laurier-Dorion, Andrés Fontecilla. The motion invited the National Assembly to affirm “its solidarity with the Ukrainian people, as well as with the very numerous diaspora present in Quebec, and in particular in Montreal”. Quebec has no less than 40,000 people of Ukrainian origin.

The outbreak of a war on European soil by Vladimir Poutine will have consequences on the world economy and that of Quebec, also warn the Ministers of Economy and Finance, Pierre Fitzgibbon and Eric Girard. “Our concerns are with the civilian populations. The developments of the last hours are worrying and it creates uncertainty. We see it in the financial markets,” noted Mr. Girard in a press scrum.

He points out that Russia is a “major energy producer”, that the war will have an impact on oil and gas prices. “It creates inflation and it could slow down the global economy,” said Mr. Girard. He added that Quebec is ready to apply the economic sanctions that will be announced by the federal government.

Minister Fitzgibbon said for his part that Quebec will support Quebec companies that will be affected by a possible embargo, and which have either “a dependence on Ukraine or Russia”. He believes that we must be wary of Russia and China, “two powers with which we must be careful”. According to him, this is an additional reason to strengthen Quebec’s self-sufficiency.

In his opinion, in a few months, Quebecers will remember the time when inflation was only 5% as “the good old days”. “It’s going to go a lot more than that in the months to come,” he said. Quebec citizens will face, he said, “a situation which is deteriorating, which is deteriorating rapidly”.

Another uncertainty raised by forecaster Leitão: the Russian invasion could significantly disrupt international trade relations. “What is China going to do? How will China react? Will international trade continue to circulate freely when there were already all kinds of obstacles before? So it gets a lot more complex,” he said.

Although economic sanctions are necessary to punish Russia, they also risk creating more “shortages of all kinds of components”. This crisis could even “derail the economic recovery”, he fears.