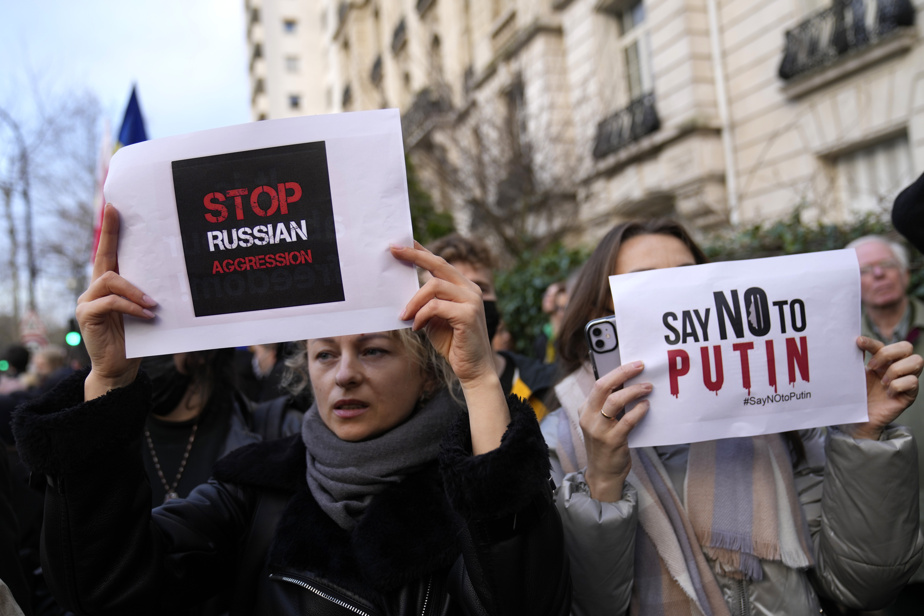 (Berlin) “Stop this madness! “: in Berlin, Paris, London or New York, thousands of demonstrators protested Thursday in many countries against the invasion of Ukraine. And in Russia itself hundreds of protesters were arrested.

In Moscow as in Saint Petersburg, thousands of Russians demonstrated and more than 1,700 people were arrested by the police in several cities of the country, more than half of them in the capital alone, according to the specialized NGO OVD-Info .

In front of the Russian embassy in Berlin, a demonstrator holds up a sign which reads: “Stop this madness, save life, no more lies”. Many others wear Ukrainian colors.

“Everyone should come here today and support Ukraine and say that the war must end,” Olga Kupricina, 32, from Kaliningrad in Russia and living in Germany since October, told AFP.

“Ukrainians and Russians are brothers and sisters. All my friends and relatives are in shock and don’t want war,” she said.

“We want to show that we are against the war. We are Russians and come from Russia. Ukraine has always been a very friendly country with us and a close country ”, abounds Ekaterina Studnitzky, 40 years old, 16 of whom spent in Germany.

Ukrainians took part in another gathering, at the foot of the mythical Brandenburg Gate.

Vladimir “Putin has already robbed my house because I am from Donetsk and my family and I had to leave because of the war,” says Sofia Avdeeva, a 22-year-old student.

In Paris, nearly 3,000 demonstrators, carrying blue and yellow flags or bouquets of mimosas in hand, gathered Thursday evening, Place de la République, an emblematic place for large gatherings in the French capital. In the middle of the presidential campaign, left-wing candidates were present, such as the ecologist Yannick Jadot or Christiane Taubira. Hundreds of people had already gathered earlier outside the Russian Embassy in Paris, as well as in other major French cities.

On Times Square, the famous square in New York, where some 200 Ukrainians had gathered, Dmytro Zhurba, 36, no longer believes too much in the international community. “They haven’t done anything in the last eight years” since the annexation of Crimea, where he is from, he laments.

“Everyone tried to play diplomacy with Russia. But you can’t”, he gets carried away. “Do you realize, there is a real war in the heart of Europe, in 2022! “.

Like Dmytro Zhurba, many worry about their parents who stayed behind.

“My parents are doctors. They will stay there, they refuse to leave,” says Kateryna Bieliaieva, 34.

“We are desperate. We cannot oppose Russia and it seems that the whole world is afraid of him, afraid that Putin will punish him, which allows him to go further and further, to kill even more people,” Libby Lubovfodor explained. .

In Georgia, the scene of a Russian intervention in 2008, thousands of people demonstrated in the main cities. “Putin attacked not only Ukraine today or Georgia years ago, but the very idea of ​​freedom,” said 61-year-old mathematics teacher Keti Tavartkiladze in Tbilisi.

In Prague, where Russian tanks intervened in 1968, several thousand people demonstrated in Wenceslas Square and then marched towards the Russian Embassy, ​​carrying a large caricature of Hitler and Putin.

In Warsaw, a country bordering Ukraine, a Russian flag was burned by a protester in front of the Russian embassy. Rallies were also organized in Washington, Istanbul, Beirut, Tokyo, Dublin, The Hague, Amsterdam or Bern.

“We feel destroyed […] It’s a very bad feeling when your mother calls you at 6 am and tells you that the war has started. So we decided to leave our workplace to come and say ‘no’ in front of the Russian embassy,” Yevhenii Osypchuk, a 27-year-old auto mechanic, who attended a rally in Stockholm, told AFP.