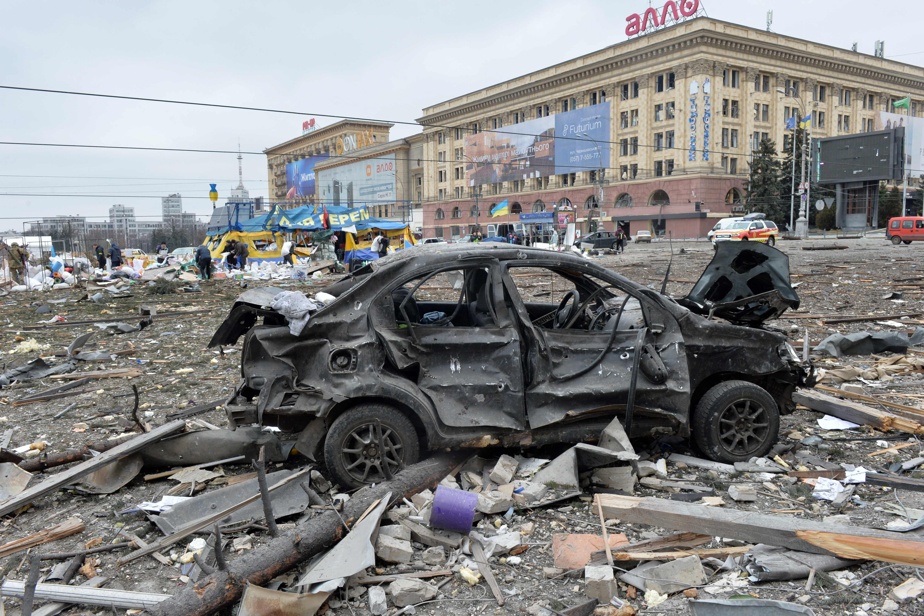 (Kyiv) Ukraine’s military faces a major offensive by Russian forces on Kiev, Kharkiv, the port of Mariupol and other cities on Tuesday, prompting Europeans to further tighten sanctions against Russia, urged by the president Ukrainian to act.

On the sixth day of the Russian invasion of Ukraine, the central square of Kharkiv, the country’s second city with 1.4 million inhabitants, close to the Russian border, was bombarded and the regional prefecture affected, indicated the governor Oleg Sinegoubov, in a video on Telegram showing the explosion.

At least 10 people were killed and more than 20 injured, according to Ukraine’s emergency service.

Fighting also took place on Monday in Okhtyrka, about 100 kilometers northwest of Kharkiv, which would have killed “about 70 Ukrainian fighters”, but also many Russians, according to local authorities. When questioned, the Ukrainian army did not confirm this assessment.

Russian Defense Minister Sergei Shoigu seemed to confirm the escalation of the offensive, stressing that the “special military operation” – an expression used by Moscow to designate the invasion – would continue “until the set objectives are reached”.

President Volodymyr Zelensky denounced “a war crime” in Kharkiv, and stressed that the defense of Kiev was “the priority”.

Satellite photos released overnight by US satellite imagery company Maxar showed a Russian convoy stretching for tens of kilometers and heading towards the Ukrainian capital from the northwest.

Witness of the Russian advance, the maneuvers of the Ukrainian army, lines of trucks and tanks, tightened to the west and north of the capital, noted AFP.

“Shooting and shelling woke us up all night,” said Natasha, 51, who opened a canteen for soldiers and volunteers in the village of Chaika, west of Kiev.

In the center of Kiev, where snow had fallen during the night, the basic necessities stores still open were always full. Residents who did not flee have erected barricades and dug trenches in recent days.

The Russians also seemed to have advanced in the south of the country, on the Sea of ​​Azov, where several major Ukrainian metropolises are located.

After an offensive on the port of Mariupol (southeast) which cut off electricity there on Tuesday morning, the Russian Ministry of Defense said that its troops which were advancing along the coast from Crimea and those coming from the separatist territory pro-Russian from Donetsk had succeeded in making their connection.

The information was not immediately verifiable. Shortly before, the Ukrainian army had claimed to have thwarted this attempt.

The Russian army has also set up roadblocks at the entrances to the coastal city of Kherson (290,000 inhabitants), further west, according to its mayor, Igor Kolikhaïev. Videos of residents posted on social media show Russian soldiers in the locality.

New sanctions “for sure”

Faced with this development, President Zelensky, who is calling for his country’s “immediate” integration into the EU, called on the Europeans to “prove that they are with Ukraine”, in an intervention in the European Parliament by videoconference. , greeted with standing ovations.

If a rapid integration into the EU seems excluded, the Europeans indicated Monday evening, after a new exchange with the American president Joe Biden, that they were ready to further toughen the sanctions of an already historic scale adopted against Russia.

“We will definitely” take new sanctions against Russia, German Chancellor Olaf Scholz confirmed on Tuesday. “The bloodbath must stop”, he added, believing that Ukraine was fighting “for its survival”.

“We are going to cause the collapse of the Russian economy,” French Economy Minister Bruno Le Maire, whose country holds the presidency of the European Union, said earlier.

“Vladimir Putin underestimated the unity and determination of the West and the rest of the world,” also said British Prime Minister Boris Johnson.

The international community is trying to deprive Russia of all its international funding and to freeze the assets of Vladimir Putin and his entourage.

Moscow retaliated by adopting a series of shock measures on Monday to support the economy and the ruble, which fell to historic lows. On Tuesday, the Russian prime minister said he was preparing a new decree to stem the flight of foreign investors, while the Moscow stock exchange remained closed.

World markets – especially European ones – are also feeling the brunt of this conflict. Oil prices continued to rise in particular, ahead of Wednesday’s meeting of the Organization of the Petroleum Exporting Countries (OPEC) and its allies.

In addition to economic sanctions, Russia is now excluded from a multitude of cultural and sporting events, including the 2022 World Cup in Qatar.

But despite this unprecedented pressure, demonstrations against the war and expressions of solidarity with Ukraine in many countries, Mr. Putin maintains his demands.

During an exchange on Monday with French President Emmanuel Macron, he laid down as conditions for stopping the invasion the recognition of Crimea as Russian territory, the demilitarization and “denazification” of Ukraine. This at the time when the first Russian-Ukrainian talks were being held.

The Russian and Ukrainian delegations separated after a few hours to consult their respective capitals, simply indicating that they could meet again “soon”.

Mr. Zelensky underlined Tuesday that “the synchronization of the shootings with the process of negotiations was obvious”.

The Kremlin deemed it premature to “give an assessment” of these first talks.

The conflict has thrown floods of Ukrainians onto the roads, more than 660,000 of whom have fled to neighboring countries since Thursday, the UN High Commissioner for Refugees said on Tuesday.

And long lines of cars continued to head towards the Polish border, from the big city in western Ukraine, Lviv, which had become both an exit door and a center of retreat.

Women who had retreated to Lviv, leaving the men of the family “to defend Ukraine”, mobilized there to support them, by donating their blood or by making camouflage nets.

The UN estimates that there are one million internally displaced people in Ukraine, an official from the High Commissioner for Refugees (UNHCR) announced on Tuesday.

The extent of the human losses remains uncertain. The UN on Monday cited 102 civilians killed and 304 injured, adding that the actual figures were “significantly” higher.

Ukraine on Monday reported 352 civilians killed and 2,040 injured since Thursday and said thousands of Russian soldiers had perished.

The Russian forces acknowledged losses in their ranks, without providing any assessment.