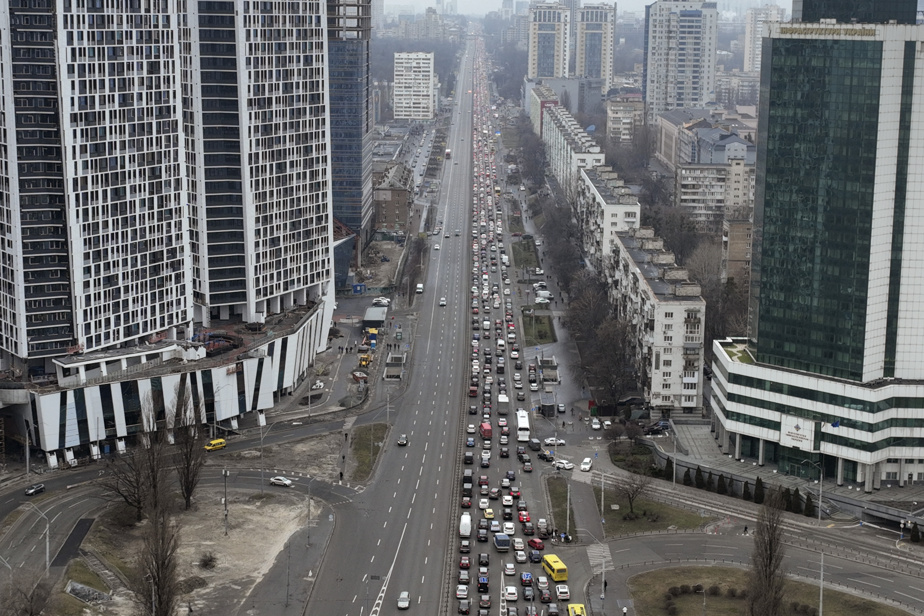 (Washington) The Russian army, which has “complete air superiority” in Ukraine, was closing in on Kiev on Thursday with the intention of “decapitating the government” of Ukraine and installing a pro-Moscow government there instead, according to Western military sources.

After firing more than 160 missiles at Ukrainian military targets, Russian forces from Belarus advanced rapidly south and “closed in on Kiev” during the day, a senior Pentagon official said.

“We believe that basically they intend to decapitate the government and install their own method of governance, which would explain this initial advance towards Kyiv,” he added.

According to a senior Western intelligence official, “Ukraine’s air defenses are now knocked out and they have no air force left to protect themselves.”

Russia now has “total air superiority” in Ukraine according to this source.

“The Russians will seek in the next few hours to mass an overwhelming force around the capital and the defense now falls to the ground forces and the popular resistance”, explained this official.

Russian troops will be massed around Kiev “in a matter of days, if not tomorrow morning, at the rate we are advancing”, he stressed. “There is not much time left. I think a lot will depend on the resistance of the Ukrainians”.

Russia has so far advanced into Ukrainian territory along three axes: south from Crimea to the city of Kherson, over the Dnieper, north from Belarus to Kiev, along two routes to the northeast and northwest of the Ukrainian capital, and east from the Russian city of Belgorod to the major industrial city of Kharkiv, according to Pentagon estimates.

After mentioning the figure of 75 bomber sorties, and 100 various missile launches, including sea-to-ground missiles fired from the Black Sea, the senior American official specified a few hours later that the number of missiles fired since the beginning of the Russian offensive had grown to “more than 160”.

“Most of them are short-range ballistic missiles, but there are also medium-range missiles and cruise missiles,” he said.

“They also dropped more paratroopers on Kharkiv and we believe there is still intense fighting” in this area of ​​eastern Ukraine.

The attacks have focused on military targets, including airbases and the Ukrainian army command, but the Pentagon says the goal is to take control of key cities, including the capital Kiev.

The Russian forces notably attacked the control of the Antonov military airport in Gostomel, at the gates of the Ukrainian capital, where the fighting seemed to continue at the end of the day.

This airport could become an assembly point for the Russian army if it wanted to encircle the capital.

“If Moscow manages to control it and manages to maintain air superiority (which is very possible), they could definitely use the airport as an entry point to attack Kiev,” tweeted Michael Horowitz, a security expert from the Consultant Le Beck International.

The senior Pentagon official stressed that this offensive was unprecedented for more than 70 years.

“We have never seen a nation-state-to-nation-state maneuver like this since World War II, certainly nothing of this magnitude, scope and scale,” he said.

So far, he said, the Russians have not yet entered western Ukraine and there are still “no indications” of an amphibious attack in the south from the Black Sea.

The fighting left at least 137 dead on the Ukrainian side, Ukrainian President Volodymyr Zelensky said Thursday, but the US official did not give an estimate of the damage suffered by the Ukrainian army.

“We have seen signs that they are resisting and fighting back,” he said, however.

Also, the country’s communications appear to be working, he noted, noting that a cyberattack to cripple them could come in the next phase of the offensive.

The Pentagon has not confirmed the destruction of several Russian military planes or the takeover by the Russian army of the Chernobyl nuclear power plant.

But Washington announced the dispatch of 7,000 additional American troops to Germany to “reassure NATO allies, deter a Russian attack and be ready to support needs in the region”.

These American soldiers are in addition to the 5,000 soldiers already sent by President Joe Biden to Germany and to the eastern flank of NATO.

With the reinforcements announced Thursday, the United States will have more than 90,000 troops in Europe.