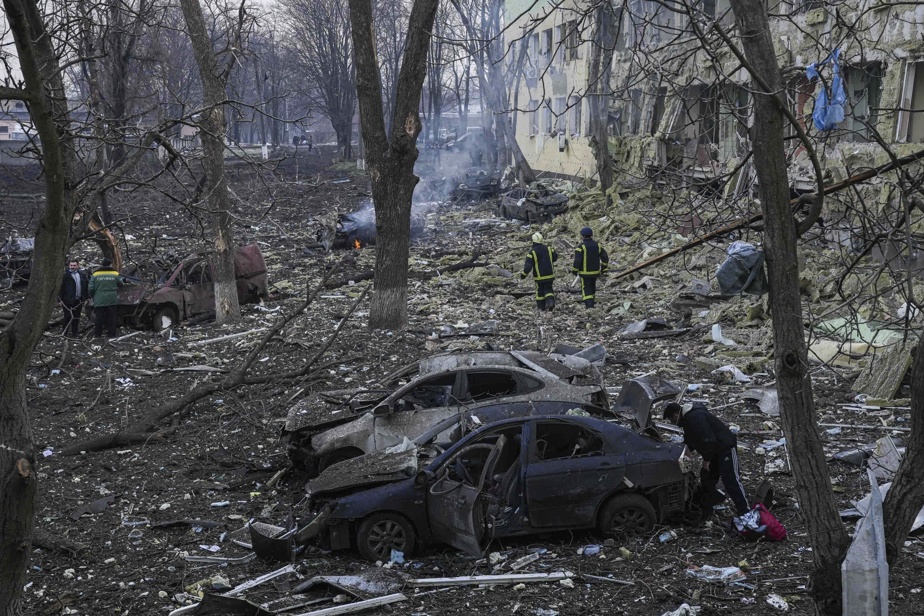 (Kyiv) Russian tanks arrived at the northeastern gates of Kyiv on Thursday, continuing their encirclement maneuver, while the flow of Ukrainians driven out by the war grew steadily, a “very big challenge” for the European Union which prepares to welcome millions of refugees.

On the same day, the first direct high-level negotiations between the belligerents since the February 24 start of the invasion of Ukraine failed to reach a ceasefire.

The United States and its European allies, for their part, were considering, in response to the atrocities appearing to be “escalating” against Ukrainian civilians, additional sanctions against Russia.

On the battlefield, an AFP team saw columns of smoke rising from the village of Skybyn, a few hundred meters from the last barrage of Ukrainian forces before entering the capital in the northeast.

Russian tanks had already arrived in its northern and western suburbs.

At the end of the morning, a rain of Russian Grad rockets fell on the desert village of Velyka Dymerka, about five kilometers from the limits of Kyiv, some of which landed about twenty meters from the AFP team.

According to the Ukrainian general staff, the Russian forces, while continuing their “offensive operation” to encircle the capital, are attacking on other fronts, in the east, the towns of Izium, Petrovske, Hrouchouvakha, Sumy and Okhtyrka or in the Donetsk and Zaparojie regions.

Turkey hopes for a summit meeting

For their part, the Russian and Ukrainian foreign ministers Sergei Lavrov and Dmytro Kuleba stuck to their guns during their discussions under the auspices of their Turkish counterpart Mevlut Cavusoglu in Antalya, a seaside resort in southern Turkey popular with tourists. Russians.

“We have talked about a ceasefire, but no progress has been made in this direction,” Mr. Kuleba said, adding, however, that he “hoped” to be able to continue the discussion with his counterpart.

The head of Ukrainian diplomacy revealed that Sergei Lavrov had assured him that Russia “will continue (its) aggression until we accept its request to capitulate”.

The Russian minister, according to whom Russia does “not plan to attack other countries” and has “not attacked Ukraine”, spoke out for the continuation of dialogue with Ukraine, but above all via envoys of the two camps in Belarus, therefore at a lower level.

Three sessions of talks between Russian and Ukrainian negotiators have already taken place in this allied state of Moscow, since the start of the invasion, resulting in several local ceasefires and the opening of humanitarian corridors to evacuate civilians from surrounded towns.

But the Russians have repeatedly been accused of violating these agreements.

The head of Turkish diplomacy, who had taken his place between his two counterparts at the end of a large U-shaped table, said he hoped to organize a summit meeting between Russian Presidents Vladimir Putin and Ukrainian President Volodymyr Zelensky. .

At the same time, French and German leaders Emmanuel Macron and Olaf Scholz, in a telephone interview with Mr. Putin, “insisted that any solution to this crisis must go through negotiations between Ukraine and Russia” and demanded “ an immediate ceasefire”.

For the time being, the Russian army is maintaining its siege of major cities and a bombing campaign, like the one that hit on Wednesday an establishment housing a children’s hospital and a maternity hospital in Mariupol, a strategic port on the sea. of Azov (southeast) besieged by Russian forces for nine days.

Three people, including a girl, perished there, announced in a new assessment Thursday the town hall, which reported the day before of 17 wounded. A fourth person was killed in a raid on this city Thursday morning.

“Heinous war crime” for the European Union, “barbaric” use of force against civilians for the White House, “immoral” act for British Prime Minister Boris Johnson or “unworthy act of war” for Emmanuel Macron : This attack sparked a wave of international condemnation.

According to a member of the Ukrainian military administration in the region, women were giving birth in one of the buildings when the strike occurred.

“The alleged airstrike is a total stage set-up for the purpose of provocation in order to maintain the anti-Russian agitation of the Western public,” retorted the Russian Ministry of Defense.

In total, since the start of the invasion, 71 children have been killed and more than 100 injured in Ukraine, said Liudmyla Denisova, human rights officer at the Ukrainian parliament, on Tuesday.

Half of the population of the Kyiv agglomeration fled in two weeks, announced its mayor, Vitali Klitschko, affirming that, now, “a little less than two million inhabitants” were there.

Humanitarian corridors were opened again on Thursday to allow the evacuation of civilians from areas hard hit by the fighting, which forced the inhabitants of several large cities to remain sometimes for days hidden in cellars.

More than 80,000 people have been evacuated in two days from the besieged towns of Sumy and around Kyiv, the government said on Thursday.

No quick accession to the EU

The damage caused by the war in Ukraine is currently estimated at 100 billion dollars, according to Oleg Ustenko, the Ukrainian president’s economic adviser.

Faced with this situation, the Americans and their allies are trying to help Ukraine while avoiding the direct military involvement of NATO member states.

In Turkey, Mr. Lavrov considered “dangerous” the supply of weapons by the West to Ukraine, denouncing in particular the deliveries of portable surface-to-air missiles.

On the European Union side, the Heads of State and Government of the 27 Member States met for two days in Versailles, near Paris, to work on the economic and security challenges created by the war in Ukraine.

Emmanuel Macron on this occasion judged that the EU was going to “change faster and stronger under the impact of the war”, while, from Warsaw, the American Vice-President Kamala Harris considered that NATO had become “more stronger” and Russia “weaker”.

But there is “no rapid procedure for joining the EU”, recalled Dutch Prime Minister Mark Rutte, for whom the integration of Ukraine is a “long-term question”.

In the meantime, welcoming millions of Ukrainian refugees is a “very, very big challenge”, but the European Union is better prepared than in 2015 and member states are showing “unprecedented” solidarity, noted European Commissioner for Home Affairs Ylva Johansson.

After two weeks of conflict, Western sanctions continue to rain down on Russia, including the freezing in the United Kingdom of the assets of seven Russian oligarchs, including Roman Abramovich, a decision which involves the suspension of the sale of the Chelsea football club .

The list of foreign companies cutting all or part of their ties with Russia is getting longer and longer. Latest, the American investment bank Goldman Sachs, which will withdraw from this country.

To deal with this, Moscow has banned the export of certain previously imported goods and equipment.

“All our obligations in terms of energy supplies” will be fulfilled, Vladimir Putin nevertheless promised, while warning that the sanctions risked leading to a global rise in food prices, because Russia will no longer be able to export enough fertilizers .

The G7 states have meanwhile called on oil and gas producing countries to “increase their deliveries” to cope with rising energy prices and the risk of shortages.