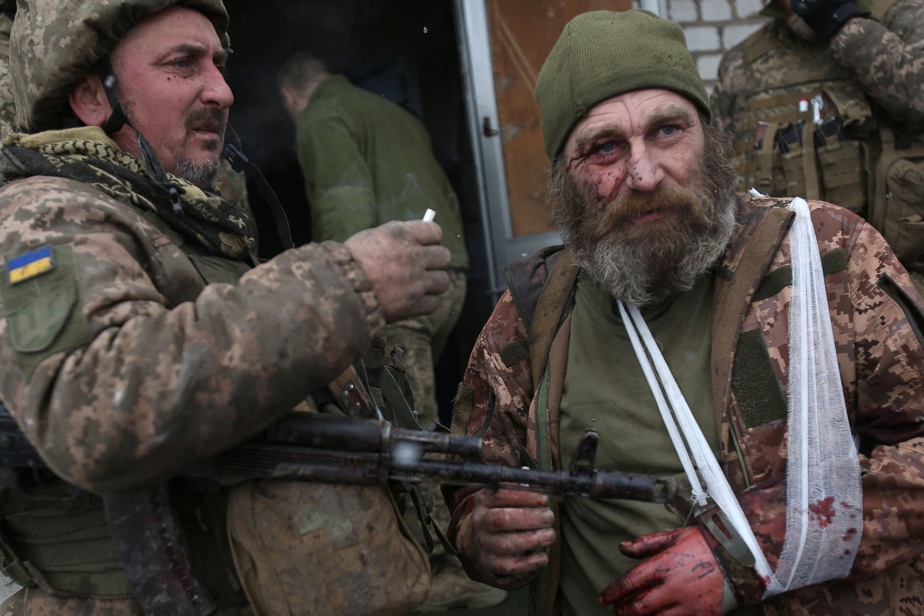 (Kyiv) Russian troops were getting ever closer to Kyiv on Wednesday, on the eve of discussions between the heads of Russian and Ukrainian diplomacy in Turkey, the first meeting at this level since the start of the Russian invasion of Ukraine on 24 February.

Russian forces have advanced rapidly in recent days towards the capital from the north and northeast, AFP found.

While the front line was still five days ago about a hundred kilometers northeast of Kyiv, columns of Russian tanks were only about fifteen kilometers away on Wednesday, near Brovary.

“The columns of Russian tanks yesterday took two villages a few kilometers away. They shoot to scare people and force them to stay at home, steal what they can to get supplies and settle among the inhabitants, so that the Ukrainian forces do not bomb them,” Volodymyr told AFP. , 41 years old, living near Brovary.

Faced with the Russian advance towards Kyiv and the continuation of bombardments in many regions, Ukrainian President Volodymyr Zelensky called on the West to send fighter planes to Ukraine “as soon as possible”, starting with the MiG-29 offered by Warsaw.

“Make a decision as soon as possible, send us planes! “, launched Mr. Zelensky in a video on Wednesday on Telegram. He thanked Warsaw for offering to supply MiG-29s and regretted that “no decision” “has (yet) been taken”.

Poland said on Tuesday that it was “ready to move all its MiG-29 planes without delay and free of charge to the Ramstein base (in Germany) and to make them available to the United States government”, so that the latter deliver to Ukraine.

However, Washington sharply rejected the proposal, deeming it not “viable”.

From the beginning, Washington and its allies have tried to help Ukraine while avoiding any direct involvement of NATO countries, which would risk a third world war.

US Vice President Kamala Harris, however, was due to discuss Thursday in Poland with Polish leaders to see how to provide “military assistance” to Ukraine, according to US administration officials who requested anonymity.

These debates on fighter jets have arisen as Russia and Ukraine agreed on Wednesday to ceasefires to allow humanitarian corridors to be established around areas hard hit by fighting in recent days, which has obliged the civilians to remain sometimes days hidden in cellars.

In particular, corridors have been defined to evacuate civilians during the day from Energodar to Zaporozhe (south), from Izium to Lozova (east) and from Sumy to Poltava (north-east), where a corridor had already allowed the evacuation of thousands of civilians on Tuesday.

Several corridors were also planned to evacuate civilians from several towns west of the capital to Kyiv. The local authorities, however, indicated that about fifty evacuation buses in this region had been stopped, without further details.

“Some progress has been made” in the negotiations aimed at “putting an end as soon as possible to the senseless bloodshed and the resistance of the Ukrainian armed forces”, estimated the spokesperson for Russian diplomacy Maria Zakharova.

She also assured that Russia was not seeking to “overthrow the government” of Ukraine, contrary to what Russian officials had been saying for two weeks.

A softening in the tone that comes after President Zelensky suggested, in an interview with the American channel ABC, to no longer insist on Ukraine’s membership of NATO, one of the issues invoked by Moscow to justify the invasion .

In the same interview, he also said he was ready for a “compromise” on the status of the separatist territories in eastern Ukraine, whose independence Vladimir Putin unilaterally recognized.

A change in position that could fuel the discussions scheduled for Thursday in Antalya, Turkey, between the Russian Foreign Ministers Sergei Lavrov and Ukrainian Dmytro Kuleba, with their Turkish counterpart Mevlüt Cavusoglu as mediator. On Wednesday, Mr. Kuleba assured in a video on Facebook that he would do everything to make the “talks (be) as effective as possible” while confiding that he had “limited expectations”.

This meeting is a first at this level since the start of the conflict almost two weeks ago.

On the eve of this meeting, Vladimir Putin and German Chancellor Olaf Scholz spoke on Wednesday about “diplomatic efforts” and humanitarian corridors, according to the Kremlin.

Meanwhile, the number of refugees who have fled Ukraine since February 24 is increasing day by day, and is now estimated at between “2.1 and 2.2 million people”, according to High Commissioner for Refugees Filippo Grandi.

Despite the humanitarian corridors, the bombardments continue in several towns.

In Severodonetsk, eastern Ukraine, 10 people died on Tuesday, according to a regional official. And in the Zhytomyr region, west of Kyiv, nine people died in airstrikes.

In the capital, where the sirens sound regularly, the musicians of the Kyiv Symphony Orchestra gave a concert on Wednesday in Maidan Square, and played the Ukrainian and European anthems under the snow, according to an AFP journalist.

In the north, on the Ukrainian-Belarusian border, the Chernobyl power plant returned to cold sweats on Wednesday, after the Ukrainian operator Ukrenergo announced that the power supply had been “completely” cut off on the site, due to actions Russian military.

But the International Atomic Energy Agency (IAEA) then claimed that this cut had “no major impact on the security” of the site, where the most serious civil nuclear disaster took place in 1986.

After two weeks of conflict, Western sanctions are increasingly making their effects felt in Russia.

The Kremlin denounced Wednesday the “economic war” declared by the United States, after the announcement Tuesday by Washington of an American embargo on the purchases of Russian hydrocarbons, in addition to the unprecedented sanctions already imposed on Moscow.

President Zelensky called on the European Union to follow this example by adopting “tough measures, sanctions against Russia for its war”, but without directly calling for a European embargo on oil or gas.

The Europeans, much more dependent than the Americans on Russian crude, refuse for the moment to go so far, while the war is already causing oil and gas prices to soar.

The current energy crisis is “comparable in intensity, in brutality, to the oil shock of 1973”, French Minister of the Economy Bruno Le Maire said on Wednesday.

The French presidency of the EU nevertheless announced Wednesday morning new European sanctions against Moscow and Minsk. The Twenty-Seven have notably added 14 oligarchs and 146 Russian senators to their list of people targeted by sanctions.

The list of Western companies – including major consumer groups like McDonald’s or Coca-Cola – cutting or suspending all or part of their activities and their ties with Russia continues to grow, adding to layoffs.

For its part, the rating agency Fitch again lowered the rating it attributes to Russia’s debt on Tuesday, a decision meaning that the risk of a sovereign default is in its eyes “imminent”.

A default by Moscow would be the first since the great financial crisis of 1998.