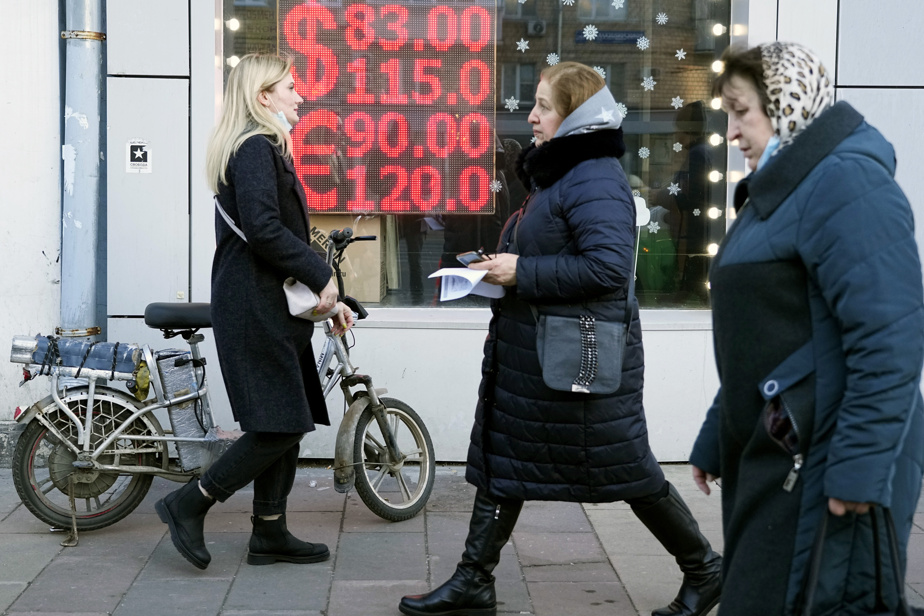 (Moscow) Risk of default, collapse of the auto sector, inflation… After weeks of increasingly harsh sanctions, the Russian economy is beginning to crack, according to data published on Wednesday.

If the cascading announcements of withdrawals of international groups from Russia had made noise, they had not yet translated into serious repercussions on real economic activity. But with the salvoes of sanctions going crescendo since the start of the Russian offensive in Ukraine, the effects are now beginning to be felt.

The Russian Ministry of Finance announced that it settled in rubles a debt of almost 650 million dollars following the refusal of a foreign bank to make the payment in dollars, which exposes it to a risk of default at the end a 30-day grace period beginning April 4.

For several weeks, Russia managed to avert the danger of a default, with the US Treasury allowing the use of foreign currencies held by Moscow abroad to settle foreign debts. But he tightened the sanctions this week, no longer accepting dollars held by Moscow in American banks.

The Russian ministry also warned creditors from “unfriendly” countries on Wednesday that the money will be refunded to them in rubles deposited in a Russian account and they will only be able to convert these rubles on the condition that the funds from Russia to the stranger are unlocked.

According to Elina Ribakova, of the Institute of International Finance in Washington, this is for Moscow to “show that they can pay”, while being “a symbolic gesture”.

“There is no basis for a real default”, for his part swept away the spokesman of the Kremlin, Dmitry Peskov, questioned during a press briefing on Wednesday, affirming that “Russia had all the necessary resources to honor his debts.

“A flaw is a flaw. The markets will judge it that way. The investors have not been paid. They will remember it, ”comments Timothy Ash, analyst at Blue Bay Asset.

This economist foresees “an impact on investment, growth, standard of living” among others. “Putin is impoverishing Russia for years,” he concludes.

Another shocking figure of the day, sales of new cars collapsed by 62.9% in March over one year, symbol of an entire sector at bay, Westerners having notably banned exports to Russia of spare parts.

Many producers stop selling components or cars to Russia, such as Audi, Honda, Jaguar, Porsche. Others stop production, such as Renault, BMW, Ford, Hyundai, Mercedes, Volkswagen.

The factories of Avtovaz (Renault-Nissan group), the leading car producer in Russia, employing tens of thousands of people, are almost at a standstill due to a shortage of imported components.

According to Avtostat, prices for new cars increased by 40% in March, and up to 60% for the top of the range.

Statistics agency Rosstat said on Wednesday that inflation since the beginning of the year to the end of March had increased by almost 10% compared to the same period in 2021.

Alexei Vedev, associate researcher at the Gaidar Institute of Ranepa University in Moscow, estimates that the price spike in March will be around 20% annually, after having exceeded 9% in February over one year. This figure is expected on Friday.

“It was a month of panic among consumers,” who rushed to products that they foresee disappearing, he notes.

“It’s very expensive, very expensive”, regrets in a supermarket in Saint Petersburg Olessia Oguieva, a 42-year-old worker. “We come home, we look at our purchases and we haven’t bought anything. »

According to Andrei Yakovlev, of the Moscow Higher School of Economics, the real crisis will not reach the real economy until this summer or autumn: “in May, a large number of companies are likely to stop”, for lack of of imported components, costing their jobs to hundreds of thousands of people.

Especially since on Wednesday evening, Washington announced a new round of sanctions claiming to be “devastating” and aimed in particular at all new investments in Russia.