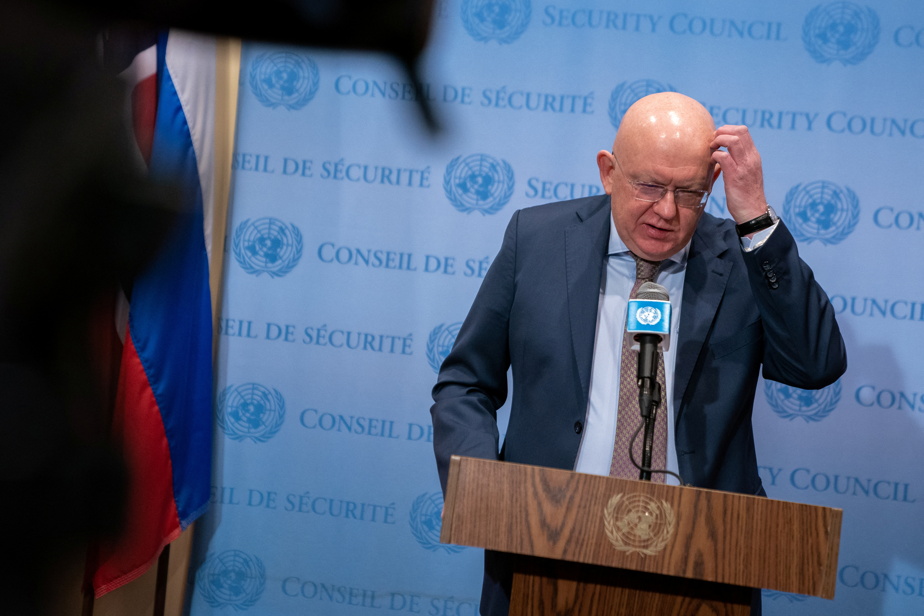 (United Nations) The UN Security Council is called upon, at Moscow’s request, to vote on Thursday on a Russian draft “humanitarian” resolution linked to Russia’s war in Ukraine, a text which does not appear as it stands should be adopted.

Originally, Moscow had asked for a vote on Wednesday before changing its mind and demanding on Thursday, diplomats say.

“Russia asked for time to ‘negotiate,'” a Western diplomat said. The Russian deputy ambassador to the UN, Dmitry Polyanskiy, confirmed that he was planning “consultations” on Wednesday. “The vote has been postponed to Thursday following requests from our colleagues,” he added, without specifying which ones.

In a statement to the media in the morning, the Russian ambassador to the UN, Vassily Nebenzia, had regretted that France and Mexico had given up putting their own draft resolution on humanitarian aid to the vote after 15 days. discussions, and preferred to ask for a vote in the General Assembly of the United Nations where Russia has no right of veto.

At the Council, “we are going to propose our own project which is humanitarian”, said Vassily Nebenzia. He affirmed that Moscow had informed Paris and Mexico of its readiness to approve a text focused on humanitarian issues and without mentioning “politics”.

Paris and Mexico, pressed by Washington and London, according to diplomats, had included in their project the request for a “cessation of hostilities”, a mention deemed “political” by Moscow which threatened to veto it.

In view of the project proposed by Russia, it seems unlikely that it will obtain the required minimum of 9 votes out of 15, without the use of its right of veto by one of the five permanent members of the Council (apart from Russia, the United States, China, France and the United Kingdom).

There “was no discussion on the Russian text” before Russia formalized its request for a Security Council vote on its project, a diplomat told AFP on condition of anonymity.

The Russian text, obtained by AFP, expresses the Security Council’s “deep concern” “at reports of civilian casualties, including children, in and around Ukraine”.

It “demands that civilians, including humanitarian personnel and people in vulnerable situations, including women and children, be fully protected”. The draft takes up several ideas and principles developed by France and Mexico in their own resolution, but not a request for a “cessation of hostilities”.

In the preamble of the Russian text, a paragraph speaks of a “ceasefire”. But only to evacuate civilians. The draft “calls for a negotiated ceasefire to allow for the rapid, safe, voluntary and unhindered evacuation of all civilians”, and stresses “the need for the parties concerned to agree on humanitarian pauses for this purpose”.

The resolution, which does not mention Russia’s responsibility in the conflict, does not identify “the parties concerned”.

This text which “does not call for an immediate end to hostilities” is “a joke”, reacted a Western diplomat on condition of anonymity, while the British ambassador to the UN, Barbara Woodward, denounced on Twitter a draft not saying that the humanitarian crisis was caused by the Russian invasion.

No date has yet been set for the vote at the General Assembly on the text initiated by France and Mexico. Despite the urgency stressed by Paris on Tuesday, and unless it is accelerated, it is possible that it will not be put to a vote until next week, according to diplomats.

On March 2, the Assembly overwhelmingly approved a text condemning Russia for its February 24 invasion of Ukraine. The resolution received 141 votes, with 5 countries voting against and 35 abstaining. According to a diplomat speaking on condition of anonymity, it “would be miraculous” if a new resolution obtained the same historic score.