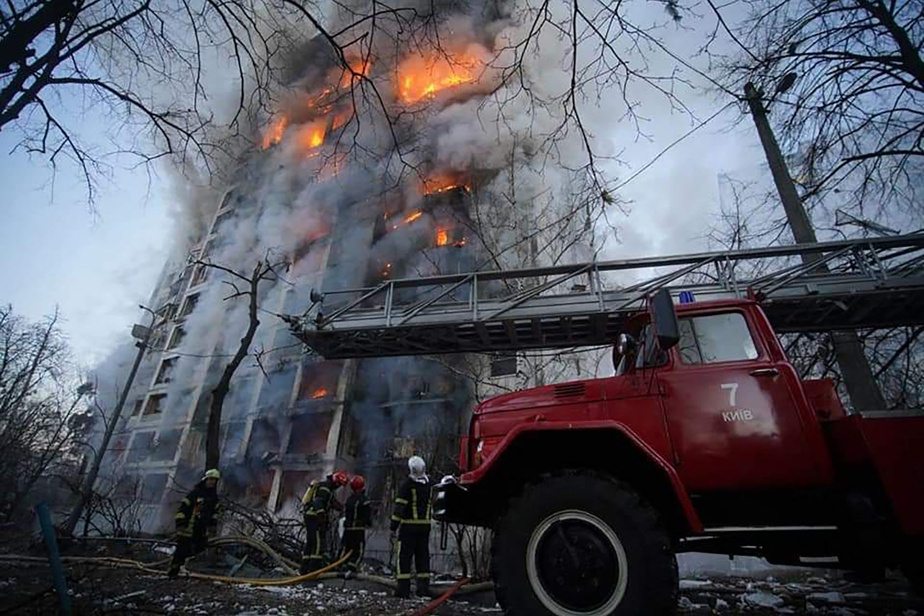 (Kyiv) Russia’s offensive in Ukraine intensified on Tuesday, with a series of strikes on Kyiv placed under curfew, as three European prime ministers defied Moscow’s bombs by visiting the city in a show of solidarity.

Russian-Ukrainian talks aimed at stopping the bloodshed were continuing, after a major concession by Ukrainian President Volodymyr Zelensky, ready to give up joining NATO.

At least four people were pulled dead and around 40 others rescued alive from an apartment building in a western district of Kyiv, Svyatoshin, after a Russian strike that caused a fire there, according to local authorities.

The day before, at the northwestern limit of the capital, two journalists, the Irishman Pierre Zakrzewski, a cameraman prowling the war zones working for Fox News, and the Ukrainian Oleksandra Kuvshinova who accompanied him, were killed, while a British Fox News journalist, Benjamin Hall, was seriously injured, according to the American television channel and Ukrainian media. The American journalist Brent Renaud had already perished on Sunday in the northwestern suburbs.

Long queues have formed during the day outside supermarkets as locals stock up. “We are holding on,” assured one of them, Vlad Volodko, 26.

Mykola Vasylinko, a 62-year-old refugee, found the situation bearable: “We came from Chernihiv (150 km north of Kyiv), the situation there is much worse”, because the Russians “tried to erase it from the surface of the earth “.

Kyiv, which Russian forces are trying to encircle, has been emptied of at least half of its 3.5 million inhabitants since the start of the conflict on February 24.

“We will be with you”

The Polish Prime Ministers Mateusz Morawiecki, Czech Petr Fiala and Slovenian Janez Jansa, who left Poland by train, arrived in Kyiv on Tuesday evening to affirm “the unequivocal support” of the European Union for Ukraine.

They spoke with President Zelensky and his Prime Minister Denys Chmygal.

After the meeting, Mateusz Morawiecki called on the EU to “very quickly give Ukraine the status of candidate” for joining the European bloc. “We will never leave you alone. We will be with you because we know that you are not only fighting for your freedom […] but also for us,” he tweeted.

Polish Deputy Prime Minister Jaroslaw Kaczynski, also on the trip, called for a NATO “peace mission”, “protected by the armed forces”, to “provide humanitarian and peaceful aid in Ukraine”, according to the agency. Polish PAP.

This trip comes against a backdrop of resumption on Tuesday, after a 24-hour break, of Russian-Ukrainian talks about a possible ceasefire and a Russian withdrawal, which will continue on Wednesday.

“Deep contradictions” persist between the two parties in this “process […] extremely laborious”, estimated in the evening on Twitter Mykhaïlo Podoliak, the Ukrainian chief negotiator.

Ally of Ukraine and member of NATO, Turkey, which has refused to align itself with Western sanctions against Russia, is also stepping up mediation efforts. Turkish Foreign Minister Mevlüt Cavusoglu is in Moscow, where he will hold talks on Wednesday, then will travel to Ukraine on Thursday to seek a ceasefire, according to Ankara.

President Zelensky appeared to make a major concession on Tuesday by admitting that his country would not join NATO. “We heard for years that the doors were open, but we also heard that we could not join [à l’OTAN]. This is the truth and it must be recognized,” he said during a meeting with Western officials.

Russian President Vladimir Putin justified the invasion of Ukraine in part by fear of seeing the former Soviet republic join the Western military alliance, which he considers an existential threat to Russia.

Pending the outcome of the negotiations, Russia is expanding its offensive to the whole of Ukraine, now also targeting the West.

After strikes on a military base near Poland on Sunday, a strike on Monday against a television tower near Rivne (northwest) left 19 dead, according to local authorities on Tuesday.

The fighting is also approaching the large strategic city of Dnipro (center). Its airport was bombed and largely destroyed overnight from Monday to Tuesday, said its mayor.

In the South, the Russians are still trying to take Mariupol, a strategic port city on the Sea of ​​Azov, which has been bombarded and besieged for days.

Some 20,000 people were able to leave Tuesday in 4,000 cars through a humanitarian corridor, according to the Ukrainian presidency. But up to 300,000 people remain stuck there, holed up in cellars and deprived of everything.

A total of around 29,000 people were evacuated from several besieged Ukrainian towns on Tuesday, according to the same source.

Further west, Mykolaiv, the last lock on the road to Odessa, on the Black Sea, is also regularly bombarded.

In a maternity ward in the city, the women, at each alert, go down to the basement, where a delivery room has been set up. “It was a place used by plumbers, technicians. Four or five days ago we had two women who gave birth simultaneously in this room,” said chief medical officer Andriy Hrybanov.

In almost three weeks of war, more than three million people have fled Ukraine, mostly to Poland, according to the International Organization for Migration (IOM). Including 1.4 million children, or “virtually one child per second”, according to UNICEF.

An extraordinary NATO summit devoted to the conflict is scheduled for March 24 in Brussels, as well as a summit of EU leaders. US President Joe Biden will go there to reaffirm the “ironclad commitment” of the United States to its allies, according to the White House.

In Russia, in a rare moment of public protest, a woman, Marina Ovsiannikova, burst onto the set of a major Russian television channel she worked for on Monday night with a sign criticizing the offensive in Ukraine.

“No to war. Don’t believe the propaganda. You are being lied to here,” it read.

The protester was arrested, the Kremlin denouncing an act of “hooliganism”.

On Tuesday, during a court hearing not directly related to her televised action but to a video she had posted on the internet, she rejected any guilt. “I remain convinced that Russia is committing a crime […] and that she is the aggressor of Ukraine,” she calmly asserted. She was fined 30,000 rubles (about 250 euros), then released.

The use of the word “war” by the media or individuals to describe Russian intervention in Ukraine is liable to prosecution and heavy penalties. The Russian authorities speak of a “special military operation”.

At the same time, Westerners continue to tighten their sanctions against Russia.

A fourth package of punitive EU measures entered into force on Tuesday, which notably ban the export to Russia of luxury sedans, champagne, jewelry and other high-end items prized by the elites who support Vladimir Putin.

London also decided on new sanctions, including punitive tariffs on vodka, a ban on the export of luxury goods to Russia and asset freezes on more than 370 Russian individuals and entities.

And the US Treasury announced new sanctions targeting Belarusian President Alexander Lukashenko, as well as Russian individuals and entity.

Russia for its part adopted counter-sanctions on Tuesday for the first time, targeting US President Joe Biden, Canadian Prime Minister Justin Trudeau and several members of their governments, the Russian Foreign Ministry said. No details on these measures were given.

Russia also announced on Tuesday that it had “notified” its withdrawal from the Council of Europe. This organization dedicated to the defense of human rights threatened to exclude him Thursday from its ranks.