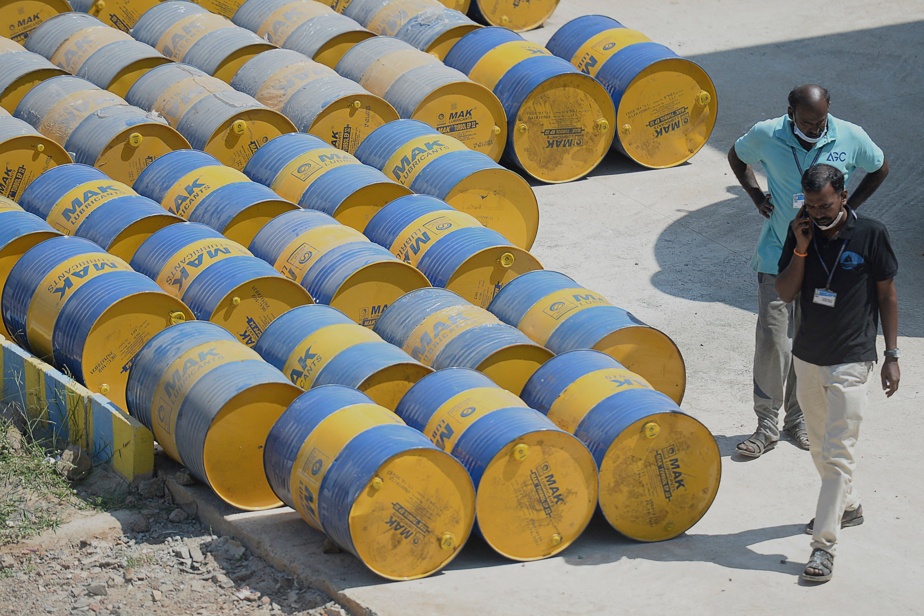 (London) Oil prices soared on Thursday before calming down a little, as the Russian military’s air and ground attack on Ukraine briefly propelled the barrel of American WTI to more than 100 dollars, and that of Brent to more than 105 dollars, a first since 2014.

The two crude benchmarks had not experienced such peaks since 2014.

Moscow launched an invasion of Ukraine at dawn on Thursday, with airstrikes across the country, particularly on the capital Kiev, and the entry of ground forces from the north, east and south of the country.

“The market expects a massive tightening of the supply” of black gold, said Carsten Fritsch, an analyst at Commerzbank.

Russia is one of the world’s leading producers of gas and oil, panicking investors about possible disruptions in the supply of hydrocarbons.

“In the event of a partial interruption of Russian oil deliveries, the other major producing countries could only compensate to a limited extent,” warns the analyst.

“If Russia were to cut off supplies to Europe, we can expect the price of oil to rise to $110 a barrel […] There would then be enormous pressure on Saudi Arabia, the United Arab Emirates and Kuwait to compensate for the 3 million barrels of oil per day that Russia supplies to Europe,” commented Andrew Lipow of Lipow Oil Associates.

At least 40 soldiers and a dozen civilians were killed Thursday in the early hours of the Russian invasion of Ukraine, according to Kiev.

The offensive sparked an international outcry, with emergency meetings scheduled in several Western countries including NATO and the European Union.

The reaction of the West and President Joe Biden, and the imposition of new banking sanctions which until then have spared Russian oil transactions, moderated the rise in prices in the second part of the session.

Washington “will release additional barrels of crude if conditions allow,” Biden said, noting that Americans “are already suffering” from rising gasoline prices at the pump.

The American president also indicated that the United States was working with its allies to “collectively tap into the strategic reserves of the major energy-consuming countries”.

Russia is also the world’s largest exporter of natural gas. The Old Continent imports about 40% of its needs from Russia.

There is no immediate solution to replace imports from Russia on the European gas market, if these were to cease, warned the French energy giant TotalEnergies on Thursday.

“If Russian gas does not come to Europe, we have a real gas price issue in Europe,” said group president Patrick Pouyanné, emphasizing Europe’s dependence on Russian gas.

French Secretary of State for European Affairs Clément Beaune assured him on Wednesday that Europe had “enough stocks to get through the winter”.

Following the recognition of pro-Russian Ukrainian provinces, Germany had finally resolved on Tuesday to suspend the certification of the Nord Stream 2 gas pipeline, a flagship project for Berlin as for Vladimir Putin carried out for a long time despite criticism.

A senior American official saw in the Berlin announcement a “major turning point” which “will free Europe from the Russian geostrategic vice” linked to the supply of natural gas.

The benchmark market in Europe, the Dutch TTF (Title Transfer Facility), which climbed to more than 143 dollars in session, closed higher at 114.50 dollars per megawatt hour (MWh).