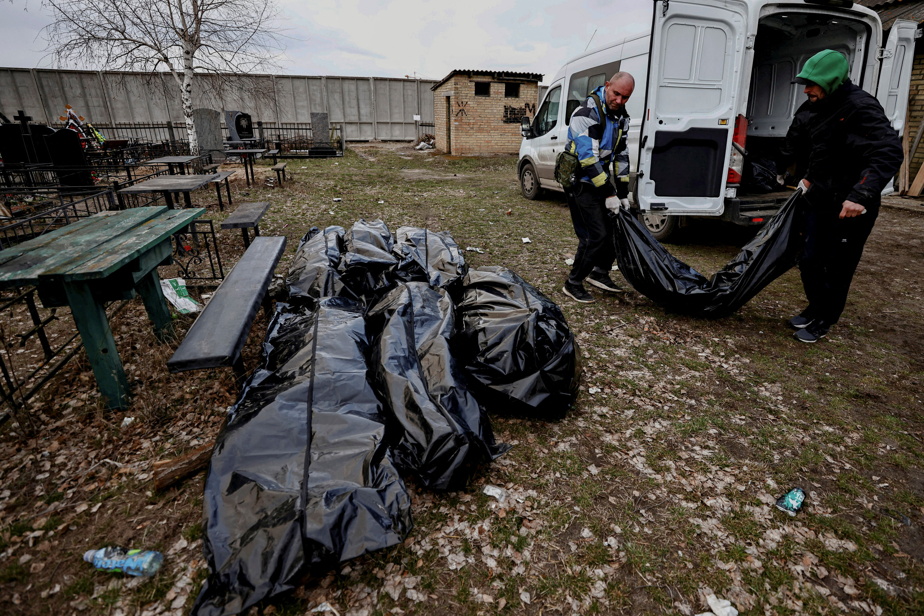 The discovery of hundreds of dead civilians in Boutcha, a town taken over by Ukrainian forces, has sparked indignation towards Russia and will no doubt attract investigators from the International Criminal Court (ICC). How does this proceed? The Press consulted some experts.

Q. Will the images of civilian corpses left by the Russian army while evacuating Boutcha attract the investigators of the International Criminal Court?

R. Certainly, believes Pascal Paradis, director general of Lawyers Without Borders for Canada. “What happened in the last few days is major,” he said. The Russian troops have left, and the Ukrainians and the international community have had access to the place. What we have seen allows the ICC to clarify its investigation. And access to evidence is facilitated by this departure of the Russian army. »

“Credible allegations of war crimes, there were already before,” said Frédéric Mégret, full professor at the Faculty of Law of McGill University, giving the example of Crimea, Donbass and Mariupol. “But the particularity is that there is obviously a deliberate massacre of civilians here. It’s not only a proven war crime, but it could be a crime against humanity. »

Q. What kind of evidence can be recovered?

R. “Important elements were discovered after the departure of the Russians, notes Mr. Paradis. We are talking about the corpses of people who are in all likelihood civilians, people in postures that clearly suggest that they were not in a combat position, and so on. For example with tied hands, with bullet holes in the head. These are major traces that could constitute evidence of war crimes and allow the ICC to focus its investigation on this particular case. »

Q. How do ICC investigations come about?

R. The job of the International Criminal Court is to determine the responsibility of individuals, not states. With this in mind, we hope to aim as high as possible in a chain of command. But between the investigation and a trial, there are many stages to cross, recalls Miriam Cohen, associate professor at the Faculty of Law of the Université de Montréal and holder of the Canada Research Chair in International Justice and fundamental rights. “To have a trial before the Court, you have to prove that there has been a violation of a specific article of the Rome Statute,” she said. War crimes are defined in this statute. Moreover, it is also necessary to make the chain between these crimes and those who committed them. This is often the most complex part: proving the chain of command. When the responsibility of one or more individuals is established, an arrest warrant may be issued. »

Q. Who collects the evidence in the field?

R. “The ICC has its investigators,” said Mr.me Cohen. But other organizations are active in gathering evidence. I am thinking for example of the International Bar Association, Eye Witness Ukraine or Global Diligence. In addition, the ICC has opened a portal [un genre d’Info-Crime] where people can manifest a testimony. That said, the prosecutor must establish whether he can use the evidence gathered. Several rules apply to the admissibility and relevance of evidence. »

Q. Can media reports or images of filmmakers constitute evidence?

R. Absolutely, answer MM. Paradise and Megret. “This can be considered as evidence and added to the file,” says Pascal Paradis. The principle at the ICC is to have great freedom over the evidence presented in the file. “We are in an era where there is a huge increase in information through social networks, notes Mr. Mégret. Through this highly decentralized circulation of information, civil society has become strong in documenting crimes under international law. We saw it with Syria. But that poses problems. Photos cannot be just photos. They have to be interpreted. We see corpses with civilian clothes, but would these people have taken part in the fighting? We don’t know that. There is a work of classification, organization, etc. And this, with in the background a Russian propaganda machine which claims that all this is false. »

Q. What about social media?

R. In a September 10, 2020 report, Human Rights Watch said social media platforms should archive “potential evidence of war crimes.” This report indicated that in recent years, online media, including YouTube, had implemented technologies to identify and remove violent, explicit, hateful, offensive, terrorist and other content. But this “prevents their possible use in the investigation of serious criminal acts, including war crimes,” the document said.