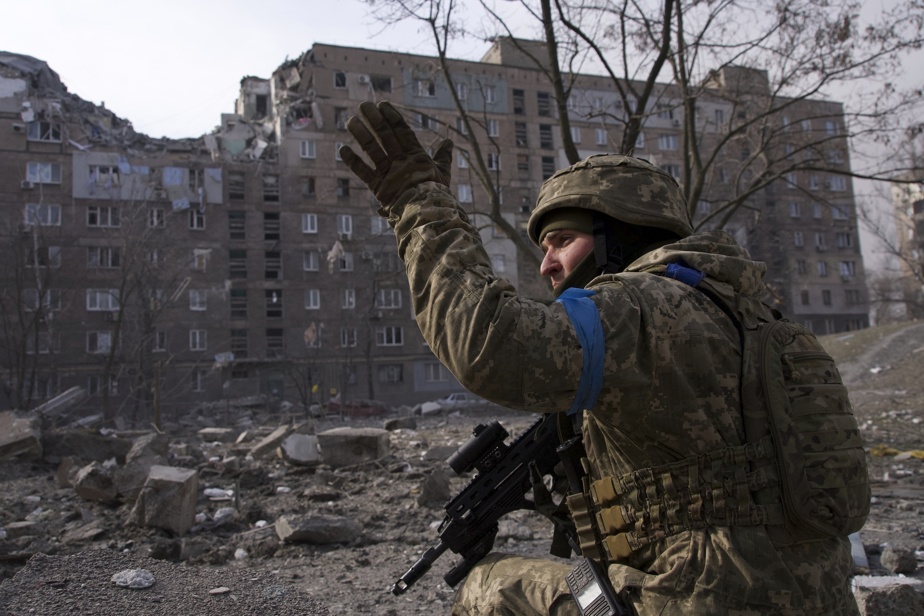 (Paris) The Ukrainian capital Kyiv, which Russian forces are trying to surround and which has been under curfew since Tuesday evening after Russian strikes on Monday and Tuesday, was again targeted on Wednesday, shaken at dawn by several strong explosions .

Russian fire against several cities has intensified, and the cities of Kharkiv (north-east) and Mariupol (south-east) are thus bombarded without respite.

Russian forces are still trying to surround Kyiv, which has been under curfew since 8 p.m. Tuesday (2 p.m. EDT) and until Thursday 7 a.m. (1 a.m. EDT).

Several explosions were heard again at dawn on Wednesday, AFP noted. Thick columns of black smoke rose above the city soon after, like the day before, when several Russian strikes had hit apartment buildings, killing at least four people.

Local authorities did not provide any immediate report or details.

Kharkiv (north), second city of Ukraine, is surrounded by the Russian forces on several sides and the main axes, but is not encircled. Fighting is also raging in this city.

The city of Zaporozhye, largely spared so far by the Russian offensive, was targeted by strikes on Wednesday, including one of its stations, according to local authorities.

Zaporozhye is the humanitarian corridor destination for the hundreds of thousands of residents of the port city of Mariupol, besieged by Russian forces.

Russian soldiers are still trying to take Mariupol, a strategic port city on the Sea of ​​Azov, besieged for days. Located about 55 kilometers from the Russian border and 85 kilometers from the separatist stronghold of Donetsk, it is the largest city still in the hands of Kyiv in the Donbass basin.

Moscow’s capture of Mariupol would be an important turning point in the invasion of Ukraine. It would make it possible to completely link up the Russian forces coming from annexed Crimea, which have already taken the ports of Berdiansk and Kherson, and the separatist and Russian troops in the Donbass.

After strikes on a military base near Poland on Sunday, a strike Monday against a television tower near Rivne (northwest) left 19 dead, local authorities said on Tuesday.

At least 691 civilians, including around 50 children, have been killed in Ukraine, and more than 1,140 injured (including 62 children), according to the latest report from the Office of the United Nations High Commissioner for Human Rights (OHCHR). ) in Ukraine, which points out that its balance sheets are probably much lower than the reality.

“About 1,300” Ukrainian soldiers have been killed since the start of the Russian invasion on February 24, Ukrainian President Volodymyr Zelensky said on Saturday.

Ukraine claims that the Russian army has lost “about 12,000 men”. Moscow announced on March 2 a single assessment (498 soldiers killed). The Pentagon has provided an estimate of 2,000 to 4,000 Russian deaths in 14 days.

The municipality of Mariupol claims that nearly 2,200 residents died in this city alone.

In almost three weeks of war, more than three million people have fled Ukraine, mostly to Poland, according to the International Organization for Migration (IOM). Including 1.4 million children, or “virtually one child per second”, according to UNICEF.