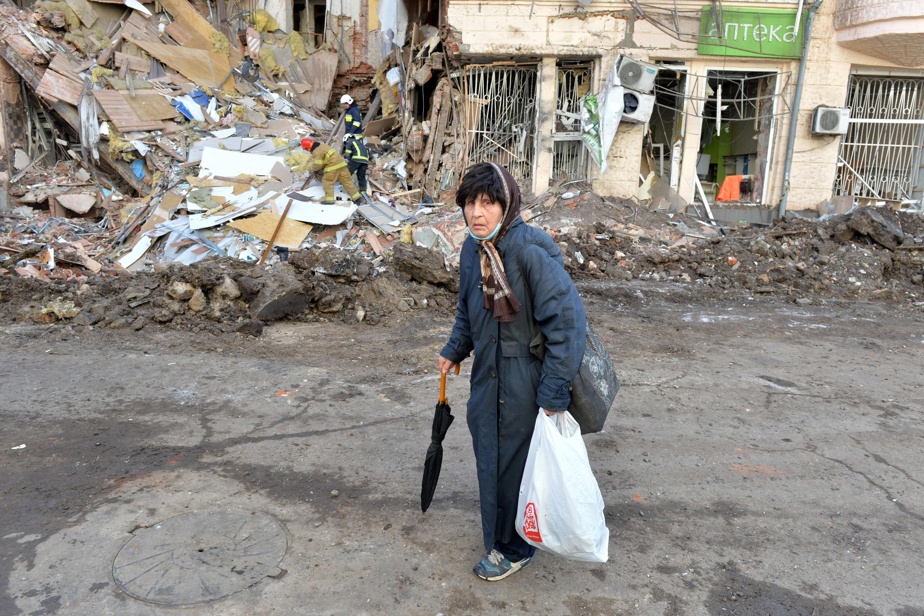 (Paris) Russia on Thursday rejected new charges of “war crime”, at 22and day of his invasion of Ukraine, the day after the bombing of a theater housing hundreds of civilians in the besieged city of Mariupol (southeast), denied by Moscow.

Russian forces are making little progress on all fronts due to resistance from the Ukrainian army, including around the capital, Kyiv, and are suffering significant casualties, according to US and British military officials. But Russian President Vladimir Putin assured Wednesday that the operation “was proceeding successfully” and according to plans.

The remains of a missile shot down over Kyiv, which the Russian army is still trying to encircle, caused the death of at least one person on Thursday and injured three, according to the emergency services.

Russian troops east of Kyiv are about 30 km from the center of the capital and have therefore made little progress in recent days, a US military official said on Wednesday, stressing that Ukrainian troops still controlled the town of Brovary .

Although isolated, Cherniguiv, northeast of Kyiv, still holds despite the bombardments. Ten people queuing to buy bread were killed there on Wednesday, while five bodies, including those of three children, were found there in the rubble of a building, according to Ukrainian authorities.

Kharkiv, Ukraine’s second city, surrounded by Russian forces on several sides and major axes, but not encircled, is under constant shelling. Three people died there on Wednesday in a market in a fire caused by a bombardment, according to the emergency services.

In the center of the country, the city of Zaporozhye, largely spared until then, was targeted by strikes on Wednesday, according to local authorities.

In Mariupol, a strategic port on the Sea of ​​Azov besieged, a theater in which nearly a thousand people had taken refuge, was destroyed on Wednesday by a bomb dropped from a Russian plane, said the Ukrainian authorities without power. provide human balance sheet at this stage.

The Russian Ministry of Defense for its part denied having bombed the theater, attributing the explosion to the ultranationalist Ukrainian battalion Azov.

The capture of Mariupol would represent a turning point by allowing Moscow to eliminate the last pocket of resistance between the Russian forces coming from Crimea, annexed since 2014, which have already seized the ports of Berdiansk and Kherson, and the separatist troops and Russians from Donbass (East).

Evacuations of civilians from the besieged city continued, with several thousand transported to Zaporozhye on Wednesday, according to Ukrainian authorities.

The west of the country, relatively spared, was nevertheless hit by deadly strikes overnight from Saturday to Sunday and then again on Monday. Its main city, Lviv, has become a hub for diplomatic missions, journalists and Ukrainians seeking safety or fleeing the country.

At least 726 civilians, including around 50 children, have been killed in Ukraine and nearly 1,200 injured, according to the UN count as of March 15, which stresses that its tolls are probably much lower than the reality.

The municipality of Mariupol claims that more than 2200 inhabitants perished in this city alone.

The losses of the Ukrainian army amount to “about 1,300” soldiers, Ukrainian President Volodymyr Zelensky said on March 12.

Ukraine claims that the Russian army has lost “about 12,000 men”. Moscow announced on March 2 its one and only toll (498 soldiers killed). The Pentagon has provided an estimate of 2,000 to 4,000 Russian deaths in two weeks, but US intelligence sources quoted by the New York Times now expect more than 7,000 in three weeks.

Since the start of the invasion, more than three million people have fled Ukraine, mostly to Poland, according to the United Nations High Commissioner for Refugees (UNHCR). More than 2 million have been displaced in the country, according to UNHCR.