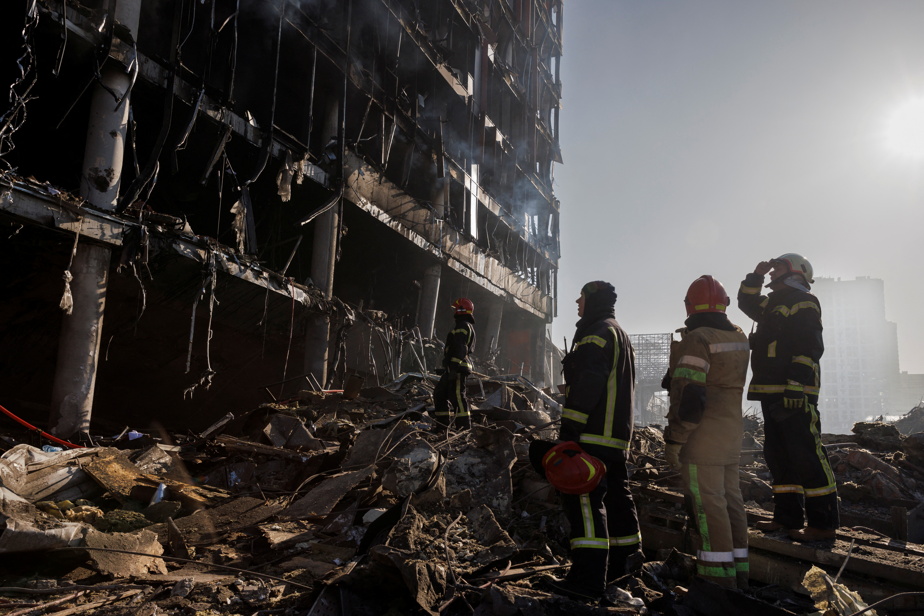 (Paris) The bombardments continue Monday on the capital Kyiv, where the Ukrainian forces are resisting, while Mariupol continues to be pounded, without for the moment the Russian forces do not completely control this strategic port city in the South.

Russian forces “did not make major advances” on Sunday, reports the Institute for the Study of War (ISW), an American think tank.

Kyiv, Kharkiv and the North

The Russian army is still trying to encircle Kyiv and faces Ukrainian resistance. The bombardments continued, in particular against a shopping center in the night from Sunday to Monday, killing at least eight people.

“Russian forces are consolidating their defensive positions and preparing to deploy more artillery capabilities” around the Ukrainian capital, according to the ISW.

According to the British Ministry of Defense, the Russian advance “stalled” northeast of Kyiv, while troops from Moscow were “repelled by fierce Ukrainian resistance” in the northwest.

A new curfew was decreed from Monday evening to Wednesday morning in Kyiv.

Kharkiv (north) is surrounded by Russian forces on several sides and major axes, but is not encircled. The bombardments continue in this city.

According to the ISW, Ukrainian forces repelled a Russian attempt to seize Izium, a northeastern city with “little chance” of coming under Moscow’s control “in the short term”.

In Mariupol, a besieged strategic port in the south-east of the country, Ukrainian troops will not lay down their arms, ignoring an ultimatum issued by Russia.

According to local authorities, Russian soldiers forcibly transported a thousand residents to Russia, depriving them of their Ukrainian passports – a possible war crime.

No major bombardment over western and central Ukraine in recent days.

No major changes from the eastern front, as Russian forces are also leading an offensive from the pro-Russian separatist territories of Donetsk and Luhansk (east), according to the ISW.

At least 816 civilians have been killed in Ukraine and more than 1,333 injured, according to the March 18 tally by the Office of the United Nations High Commissioner for Human Rights (OHCHR) in Ukraine consulted by AFP, which points out that its balance sheets are probably much lower than the reality.

The losses of the Ukrainian army amount to “about 1,300” soldiers, Ukrainian President Volodymyr Zelensky said on March 12.

Moscow announced on March 2 its one and only toll (498 soldiers killed).

Ukraine claims that the Russian army has lost “about 12,000 men”.

The Pentagon has provided an estimate of 2,000 to 4,000 Russian deaths in two weeks, but US intelligence sources quoted by the New York Times now expect more than 7,000 in three weeks.

Around 10 million Ukrainians have fled their homes, of which around a third have gone abroad, mainly to Poland, according to the UN.