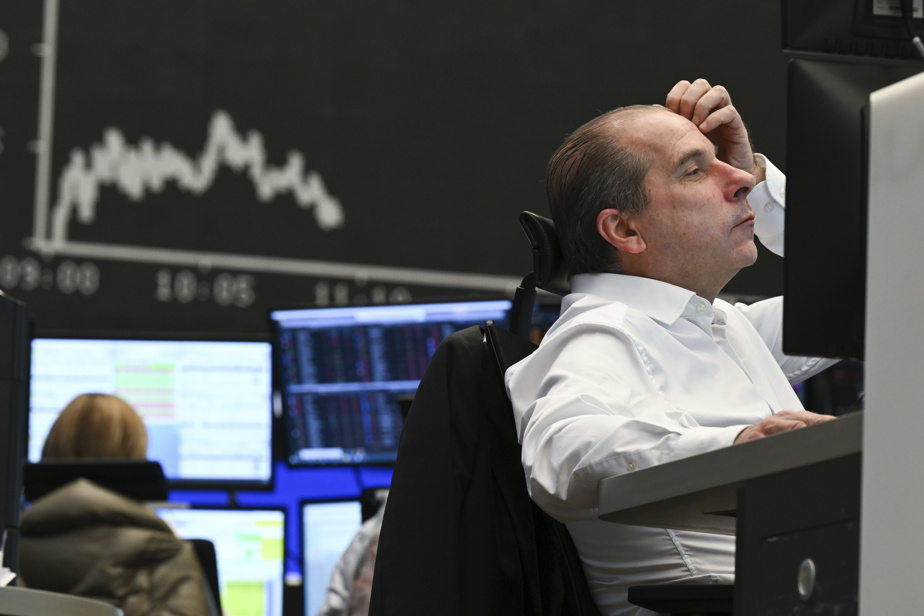 (Paris) The world markets were caught Thursday in a storm which gained momentum in the middle of the day after the invasion of Ukraine by Russia with falling stock markets, soaring raw materials and plebiscite of safe havens.

European stock markets further amplified their plunge as the session went on, losing up to 5%, as the European Union prepares a new set of sanctions which is the “toughest ever implemented”, according to its chief executive. diplomacy.

Wall Street was poised to follow the same pattern at the open, with futures for the three major indices losing 2.28% to 2.87%.

The Moscow Stock Exchange collapsed by more than 30%.

The price of a barrel of oil has exceeded 100 dollars, both for the American barrel and that of the North Sea. Aluminum and wheat also broke records.

Vladimir Putin launched an invasion of Ukraine on Thursday night, with air strikes and the entry of ground forces from several directions, the Ukrainian authorities reporting a few hours later an initial assessment of around fifty dead, including one ten civilians.

The offensive sparked an international outcry to which Moscow remains deaf.

Massive sale of equities, purchase of gold (+2.84% to 1963 dollars per ounce) and government bonds, “with this flare-up of international tensions, the rush towards safe havens is underway”, notes Susannah Streeter, analyst at Hargreaves Lansdown. The yield on US 10-year debt fell to 1.87% from 1.99% on Wednesday.

Raw materials are on fire

“The tensions between Russia and Ukraine lead to both a possible demand shock (for Europe) and, above all, a much larger supply shock for the rest of the world, given the importance from Russia and Ukraine for energy and raw materials,” said National Bank of Australia’s Tapas Strickland.

As for natural gas, the reference market in Europe exploded by 32% compared to the previous day. The price of aluminum also reached a new record.

Cereal prices also jumped on the European market, with an unprecedented peak for wheat at 344 euros per tonne, up 15.68%.

“Rising energy prices are a big headache for Europe, since 40% of its natural gas and 30% of its oil come from Russia,” explains a Swissquote analyst.

Banks and the financial sector were targeted by the first sanctions imposed by the European Union and the United States. In Moscow, Sberbank fell by 48.30%, VTB Bank by 41.60%. In Vienna, Raiffeisen lost 18.94%.

In Paris, Societe Generale, present in Russia via Rosbank, lost 10.44%. In Milan, UniCredit fell by more than 11.84%, sanctioned for its exposure to Russia, and Intesa Sanpaolo, fell by 8.18%.

Fall of the ruble, jump of the dollar

After a historic low of 90 rubles to the dollar, the currency fell 2.29% around 7 a.m., after the intervention of the Russian Central Bank to “stabilize the situation”.

The dollar, considered a safe haven, gained 1.16% against the European currency, to 0.8951 euro for one dollar, its highest since June 2020.

The sell-off affected even more the shares of companies with a strong presence in Russia.

In Frankfurt, the energy group Uniper, linked to the Nord Stream 2 gas pipeline, yielded 15.69%. The wholesale chain Metro, which has around 100 stores in Russia, was down 6%.