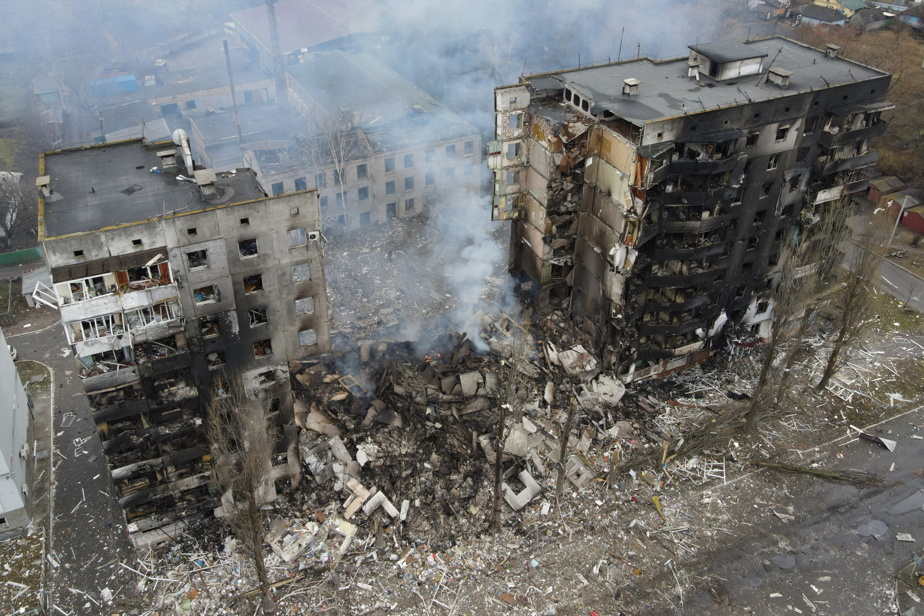 Russian President Vladimir Putin said on Thursday he was determined to continue the offensive against Ukraine “without compromise”.

(Kiev) Russian forces pounded several strategic cities on Thursday, despite the start of new talks between Kyiv and Moscow.

Last testimony of these deadly strikes, those which killed nine people and injured four while targeting two schools and homes in the Ukrainian city of Cherniguiv (north), according to the local governor.

The intensification of the Russian offensive, exactly one week after the start of the attack, coincides with new Russian-Ukrainian talks, which began shortly before 3 p.m. GMT (11 a.m. EST) on the Belarusian-Polish border.

“Russia intends to continue its fight without compromise against members of nationalist groups who commit war crimes,” Putin said in a telephone interview with his French counterpart Emmanuel Macron, according to a report by the Kremlin.

He repeated his demand for demilitarization and a neutral status for Ukraine, before warning: “Any attempt to buy time through negotiations will only lead to the addition of additional demands on -vis Kyiv”.

The French president, who said the day before still wanting to “keep in touch” with his Russian counterpart, believes after the call that “the worst is yet to come” and that Mr. Putin wants to “take control” of all of Ukraine, according to the Elysée.

Earlier, Ukrainian President Volodymyr Zelensky had promised to make the Russians pay for all the losses caused, in order to “rebuild every building, every street, every city”.

Because on the ground, the Russian army seems to have reinforced its firepower to accelerate the capture of strategic cities.

Ukrainian officials confirmed that the Russian army had taken control of a large city, Kherson, a metropolis of 290,000 inhabitants near the Crimean peninsula, on the night of Wednesday to Thursday, after heavy bombardments.

The head of the regional administration, Gennadi Lagouta, called on Telegram residents to stay at home, indicating that “the (Russian) occupiers are in all parts of the city and very dangerous”.

Further east, in Mariupol, the mayor accused Russia of wanting to besiege the city.

“They destroyed the bridges, destroyed the trains to prevent us from taking out our wives, children and old people […] They seek to impose a blockade, like in Leningrad”, the Soviet city that has become Saint Petersburg today, besieged by the Nazis, Vadym Boïtchenko said on Telegram.

This large Ukrainian port on the Sea of ​​Azov, a key site to allow Russian forces arriving from Donbass, in the northeast, and Crimea, in the southwest, to join, “resists” for the moment, according to the Ukrainian army.

At the other end of the country, in the northeast near the Russian border, the large city of Kharkiv, hit by deadly bombardments on Tuesday and Wednesday, was shelled throughout the night, according to regional authorities.

And 200 km south of Kharkiv, the million-strong industrial center of Dnipro, spared for now, was preparing for a Russian assault. AFP saw residents pile up sandbags and prepare Molotov cocktails.

In Kyiv, where loud explosions were heard overnight from Wednesday to Thursday, residents who did not flee have been preparing for an assault for days. Thousands of women and children have been sleeping for several nights in the metro, transformed into an air raid shelter.

150 km west of the capital, in Zhytomyr, Oleg Roubak doomed Vladimir Putin to “hell for eternity”, after a strike Tuesday evening which killed his wife and destroyed his house.

“I want the whole world to listen to my story,” he told AFP. A story of simple happiness until the Russian invasion shattered it.

Under these conditions, the Ukrainian delegation to the talks intended to demand, at a minimum, humanitarian corridors to evacuate civilians, its leader, David Arakhamia, said on Facebook.

The day before, the head of the Russian delegation, Vladimir Medinski, had suggested that the talks would focus on a ceasefire.

Initial negotiations on Monday had yielded no tangible results. Kyiv demanded an immediate end to the invasion, while Moscow seemed to expect a surrender.

The United States “will support diplomatic efforts” to obtain a ceasefire with Moscow, even if “it is much more difficult to achieve this when the shots ring out and the tanks advance”, declared the chief of the American diplomacy Antony Blinken.

“Hundreds if not thousands of civilians have been killed and injured,” he said. No one has so far put forward an estimate for the overall toll of the conflict.

Mr. Blinken began a tour on Thursday including Poland, the Baltic States and Moldova.

The latter, which is neither a member of the EU nor of NATO and has a Russian separatist region, fears to be the next Russian target. Just like Georgia which, attacked militarily by Russia in 2008, filed its application to join the EU on Thursday.

The deadly shelling of Ukrainian cities arouses great emotion in the world, where demonstrations and outbursts of solidarity with the Ukrainians are linked.

UN humanitarian chief Martin Griffiths said on Thursday that he had raised $1.5 billion in emergency aid for Ukraine, and the bells of cathedrals in Paris, Berlin, Madrid or Vienna rang at 11 h GMT (6 h EST) for Ukraine.

More than a million people have already fled Ukraine, according to the latest figures from the UN High Commissioner for Refugees, especially to Poland, Hungary, Romania and Moldova.

Some are also starting to arrive in Berlin from Warsaw, by train. The mayor of the German capital, Franziska Giffey, expects to take care of up to 20,000 refugees.

Russia’s isolation became clear on Wednesday at the United Nations General Assembly: the 193 member countries overwhelmingly voted for a resolution that “demands that Russia immediately cease the use of force against Ukraine”. Five countries opposed it, 35 abstaining, including China.

The prosecutor of the International Criminal Court (ICC), the British Karim Khan, announced Wednesday evening the “immediate opening” of an investigation into war crimes against Russia.

Collapse of the ruble

The economic sanctions imposed by the Western camp on Moscow and those close to Putin are increasingly harsh.

The EU has confirmed that seven Russian banks will, from March 12, be excluded from the Swift messaging system, a key cog in international finance. The World Bank has cut all its aid programs to Russia and Belarus, while Canada imposed 35% import duties on Russian and Belarusian products on Thursday.

Financial rating agencies Fitch and Moody’s have downgraded Russia to the category of countries at risk of not being able to repay their debt.

After losing more than a third of its value in foreign currencies, the ruble plunged again by more than 11% on Thursday morning.

Moscow is stepping up measures to defend its economy, but also to stifle any voice opposed to the war: the independent radio station Ekho Moskvy, had to close on Thursday after being banned from the air, and the opposition internet television channel Dojd , whose access had also been blocked by the Russian regulator, announced that it was suspending its work.

As a result of Russia’s economic isolation, the prices of hydrocarbons and aluminium, of which Moscow is a major exporter, continue to soar. The barrel of WTI oil exceeded 115 dollars, a record since 2008.

Russia is also now virtually banned from the world of sport and culture. Latest exclusion measure to date: the promoter of the F1 World Championship has announced the cancellation of the Grand Prix in Russia.