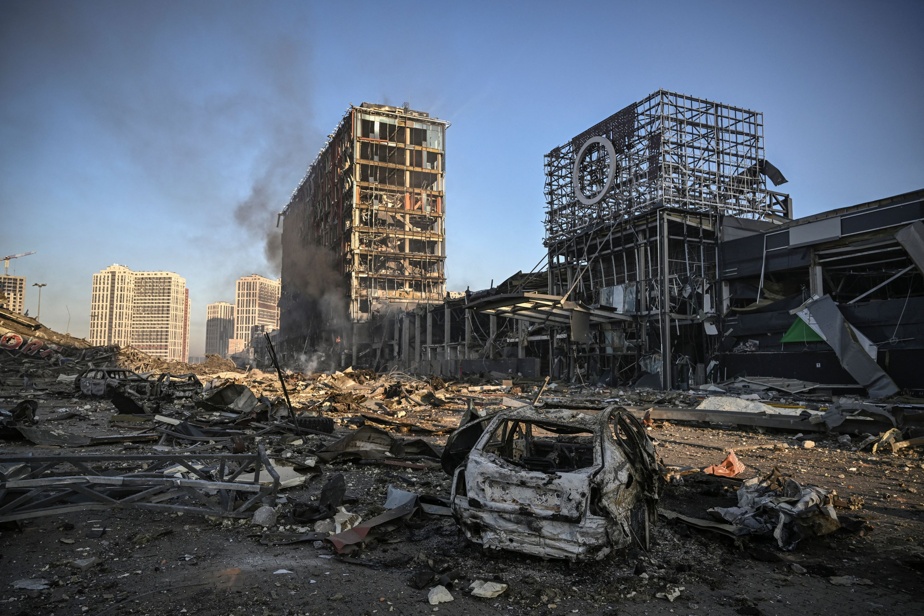 Russian troops are still seeking to encircle Kyiv where a new curfew has been imposed from 6 p.m. GMT on Monday until 1 a.m. EDT on Wednesday.

In the night from Sunday to Monday, a bombardment of a shopping center in the northwest of the capital killed at least eight people, according to the Ukrainian authorities.

According to the mayor, six residential buildings, two schools and two nurseries near the center were damaged.

Half of Kyiv’s 3.5 million inhabitants have fled.

In the north of the country, the regional governor of Sumy reported an “ammonia leak” in an area of ​​2.5 km around a fertilizer factory.

Residents should take shelter in basements or low-rise buildings to avoid exposure to this lighter-than-air product.

At approximately 3:45 a.m. EDT, the Ukrainians reported that the accident, caused by shelling of unspecified origin, was “over”.

The Russian Defense Minister accused “nationalists” of having “mined” the ammonia and chlorine storage facilities to “massively poison the inhabitants of the region, in the event of the Russians entering the city”.

Ukraine will not “lay down its arms and will not leave the besieged city” of Mariupol (South), declared its Deputy Prime Minister to a Ukrainian media, in reaction to the ultimatum posed by Russia.

Russia’s Defense Ministry had called on Ukraine to “lay down its arms” and demanded a “written response” to its ultimatum by 5 a.m. local time Monday (11 p.m. EDT, Sunday), in the name of safeguarding residents and infrastructure of Mariupol, ravaged by bombardments and fighting.

The Ukrainian authorities are demanding the opening of a humanitarian corridor to allow some 350,000 people who are still stranded to leave.

“What is happening in Mariupol is a major war crime. The indiscriminate bombings are devastating the city and killing everyone,” denounced the head of diplomacy of the European Union (EU) Josep Borrell on Monday.

The EU will strengthen its military defenses

The EU should approve the formation of a military force of 5,000 fighters and commit to an increase in its military spending with the aim of carrying out interventions alone by 2025.

“We are going to approve a ‘strategic compass’ which is not the answer to the war in Ukraine, but part of the answer, because it must make us stronger militarily”, underlined the head of European diplomacy.

EU must stop all ‘trade’ with Moscow

Ukrainian President Volodymyr Zelensky has called on the EU, especially Germany, to stop all “trade” with Russia, including refusing its energy resources.

“No euros for the occupiers, close all your ports to them, do not send them your goods, refuse energy resources,” he pleaded on Telegram. “Without trade with you, without your companies and your banks, Russia will have no more money for this war”.

The Europeans, very dependent on Russian hydrocarbons, have ruled out sanctioning this sector, which is very important for the Russian economy.

“Such an embargo would have a very serious influence on the world oil market, a harmful influence on the energy market in Europe,” the Kremlin warned on Monday. “But the Americans won’t lose anything, it’s obvious, they will feel much better than the Europeans”.

After more than three weeks of suspension, the Moscow Stock Exchange resumed trading in government bonds on Monday, the first step towards a gradual reopening.

The authorities have so far refused to reopen the exchanges for fear of a stock market cataclysm that the massive Western sanctions could have caused.