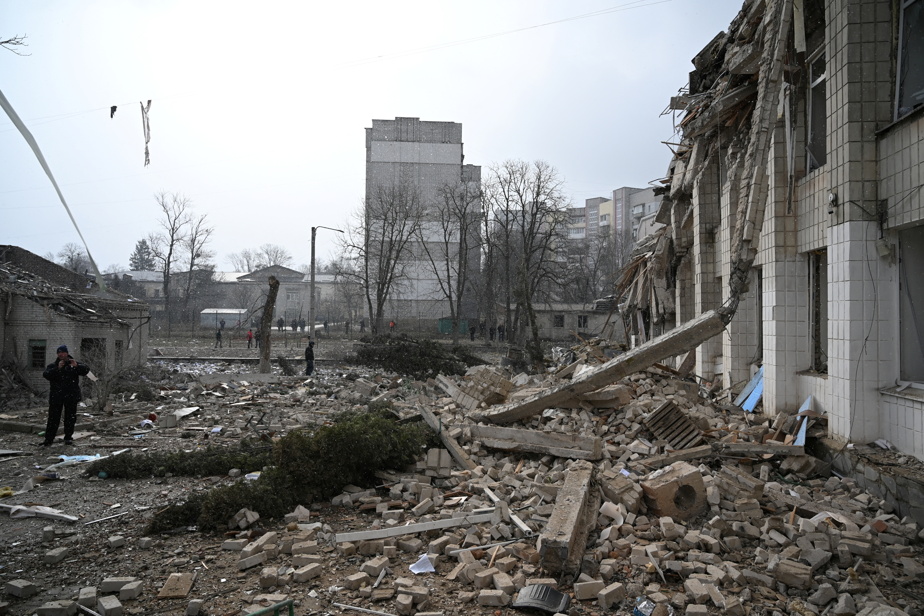 The Russian army occupied the Ukrainian nuclear power plant in Zaporijjia, the largest in Europe, on Friday, where bombings during the night raised fears of a disaster.

Russian tank fire at the plant set fire to a training building and a laboratory, but no radioactive leak was found, Ukrainian authorities said.

Faced with “an unprecedented situation”, the head of the International Atomic Energy Agency (IAEA) offered to go to Ukraine to negotiate a solution with the Russians in order to guarantee the security of nuclear sites.

“This is the first time that a military conflict has taken place in a country with a large nuclear program,” he said.

The G7 called in a statement on Friday to Russia to stop its attacks near nuclear power plants.

“Any armed attack and any threat against nuclear installations used for peaceful purposes constitutes a violation of the principles of the Charter of the United Nations, of international law […] “, according to a joint declaration of the G7 countries.

The Russian army continues to advance

According to the Ukrainians, the fighting continued Friday in Cherniguiv, north of Kyiv where Russian strikes made according to a new balance sheet 47 dead the day before in a residential area.

The situation had also become “hell” in Okhtyrka, and “critical” in Sumy, two cities located some 350 km east of Kyiv, according to local authorities.

As for the strategic port of Mariupol (southeast), the humanitarian situation is “terrible” after 40 hours of uninterrupted bombing, including on schools and hospitals, said the deputy mayor of the city, Sergei Orlov.

More than 1.2 million people have already fled the country, according to the UN.

Ukraine expect a 3and round of negotiations

Ukraine expects a third round of negotiations with Russia this weekend, said one of the Ukrainian negotiators, Mykhaïlo Podoliak, adviser to the head of the presidential administration.

But Russian President Vladimir Putin said in an interview with German Chancellor Olaf Scholz that dialogue was only possible if “all Russian demands” were accepted.

The German chancellor urged the Russian president to “immediately cease all fighting and allow humanitarian access to combat zones”.

NATO members have rejected Kyiv’s request to create a no-fly zone in Ukraine.

“The only way to implement a no-fly zone is to send NATO fighter jets into Ukrainian airspace and then shoot down Russian jets to enforce it,” he said. explained Alliance Secretary General Jens Stoltenberg.

“We could end up with an all-out war in Europe,” he stressed. “NATO is a defensive alliance. We do not want to be part of the conflict in Ukraine,” he insisted.

The UN Security Council met urgently on Friday at the request of the United Kingdom to study the consequences of the Russian bombings on the Zaporozhye nuclear power plant.

The attack on a Ukrainian nuclear site represented “a huge threat to all of Europe and the world”, said US Ambassador Linda Thomas-Greenfield.

Russia denounced “a lie”, through the voice of its ambassador.

Russia put heavy criminal penalties on Friday for the distribution of “misleading information about the army” and blocked the media, an illustration of the internal turn of the screw that accompanies the invasion of Ukraine.

The BBC has announced that it is suspending the work of its journalists in Russia to ensure their “safety”.

And the independent Russian newspaper Novaya Gazeta, whose editor is the last Nobel Peace Prize laureate, announced the removal of some of its content related to Ukraine in order to avoid sanctions.

The UN Human Rights Council has overwhelmingly approved a resolution calling for an international commission of inquiry into violations of human rights and humanitarian law in Ukraine.

Ukrainian Foreign Minister Dmytro Kouleba has accused Russian soldiers of “raping women in occupied Ukrainian cities”, calling for the creation of a special criminal court to try the “crime of aggression” committed by Vladimir Putin.

The Russian army used on February 28 in Kharkiv (east) cluster munitions, which are indiscriminately lethal against civilians, and the use of which could constitute a war crime, affirms the organization Human Rights Watch (HRW).

The conflict in Ukraine pushed the price of natural gas to a new all-time high in Europe on Friday.

Fear of disruption of Russian exports, which provide 40% of European gas imports, pushed the European market benchmark, the Dutch TTF, to a new record, at 213,895 euros per megawatt hour (MWh).

US IT giant Microsoft has announced it is suspending “new sales” of its products and services in Russia, joining a long list of companies at least temporarily withdrawing from the country.