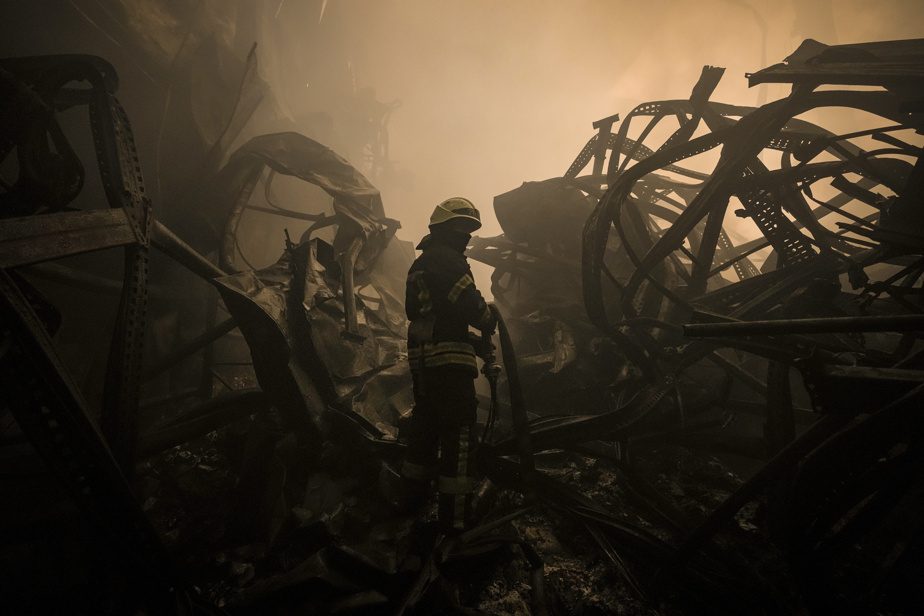 Bombings in Kyiv and Kharkiv

Two people were killed in Russian bombardments on Kyiv which targeted a residential building and the Antonov aeronautical factory, announced the town hall of the Ukrainian capital.

In Kharkiv, in northeastern Ukraine, a bombardment by the Russian army killed two people, according to the regional prosecutor’s office.

In Donetsk, pro-Russian separatists backed by Moscow claimed that a Ukrainian army strike had targeted the city center, killing at least 16 people according to the local “Ministry” of Health and 23 dead according to the powerful Committee of Russian investigation.

The Ukrainian army has strongly denied having fired a missile against Donetsk. “It’s definitely a Russian missile or some other kind of ammunition,” the Ukrainian military spokesman said.

The Russian army “does not exclude the possibility of taking full control of the large cities which are already surrounded”, warned the spokesman of the Kremlin, Dmitry Peskov.

In recent days, fighting has intensified around Kyiv, which is almost completely surrounded.

The fourth round of talks between Ukraine and Russia will resume on Tuesday, a Kyiv negotiator reported.

“We are taking a technical break in the negotiations until tomorrow” to allow “additional work of the sub-working groups and clarification” of certain terms, said Mykhailo Podoliak, a negotiator and adviser to Ukrainian President Volodymyr Zelensky.

Ukraine has accused the Russian military of again cutting off power to the Chernobyl nuclear site and detonating munitions near a reactor in Zaporozhye, with both plants under Moscow control.

The Ukrainian authorities had indicated the day before that they had restored the power supply to the former Chernobyl power plant, which still needs energy to ensure the optimal safety of the fuel assemblies stored on site.

160 cars were able to get out of Mariupol

Some 160 cars were able to exit Monday through a humanitarian corridor from the Ukrainian city of Mariupol, besieged by Russian and pro-Russian separatist forces, the municipality said.

Several attempts to deliver humanitarian aid to the city in southeastern Ukraine have failed in recent days.

More than 2.8 million people have fled Ukraine since the start of the Russian invasion launched on February 24, according to the latest count published by the UN.

The UN has also identified around 2 million internally displaced persons.

Before this extension, 862 people and 53 Russian entities were already on this blacklist which prohibits entry into EU territory and allows the seizure of their property.

Beijing and Washington talk in Rome

Two senior US and Chinese diplomats have begun talks in Rome, amid tense reports from The New York Times that Russia has requested economic and military assistance from China to wage war in Ukraine and circumvent Western sanctions.

Beijing reacted angrily to the reports, but did not specifically deny them.

Zelensky calls for a no-fly zone

Volodymyr Zelensky again urged NATO, overnight from Sunday to Monday, to establish a no-fly zone over his country, warning that otherwise the organization risked seeing “Russian rockets” fall on its member states.

Kadyrov claims to be in Ukraine

The leader of the Russian Republic of Chechnya Ramzan Kadyrov, a protege of Russian President Vladimir Putin, assured Monday that he was in Ukraine alongside Moscow forces.

Mr. Kadyrov, denounced by international NGOs for the serious human rights violations taking place in his Caucasian republic, published a video on Telegram showing him in military uniform, studying plans around a table with soldiers in a room.