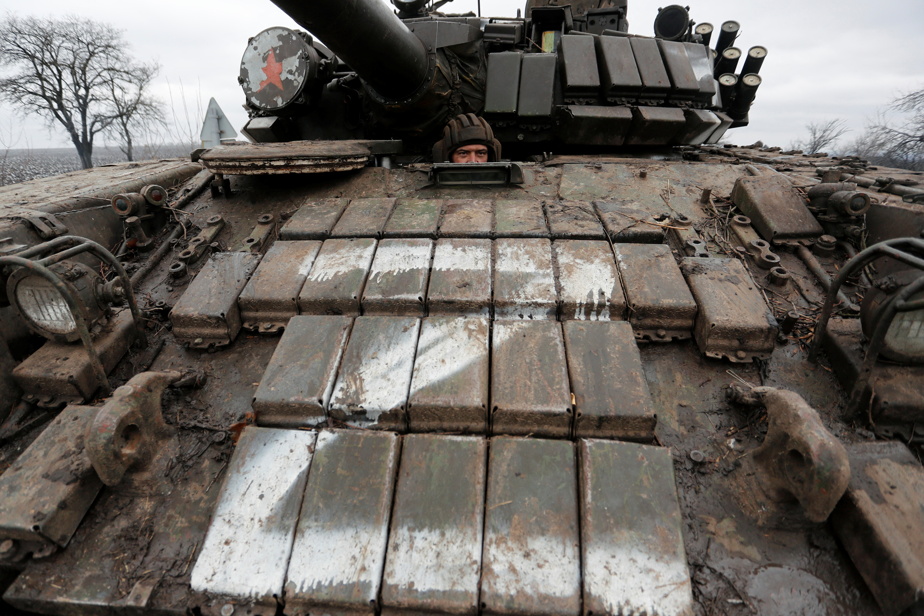 Talks between Russia and Ukraine were underway in Belarus at one of President Alexander Lukashenko’s residences on the Ukrainian-Belarusian border.

Kiev demands “an immediate ceasefire and the withdrawal of (Russian) troops from Ukrainian territory”.

Moscow has said it wants to find “an agreement” which is “in the interest of both parties”.

Ukrainian President Volodymyr Zelensky, who is not taking part in these talks, called on Russian soldiers to “lay down their arms”.

Join the EU “without delay”

The Ukrainian president urged the European Union to integrate his country “without delay” “via a new special procedure”.

On the ground, the Ukrainian army claimed to have repelled several attempts by Russian forces to storm the outskirts of Kiev.

For its part, the Russian army assured that civilians could leave Kiev “freely”, while accusing the Ukrainian authorities of using them as “human shields”.

At least eleven people were killed in Russian bombardments on residential areas of Kharkiv, the country’s second largest city on the border with Russia, the regional governor announced on Monday afternoon, saying he feared “Dozens of dead”.

In the morning, the Russian army claimed “air supremacy” over all of Ukraine.

British Defense Minister Ben Wallace said the nuclear threat posed by Vladimir Putin on Sunday was intended to “impress”, but did not constitute a “significant change” in Russia’s deterrence strategy.

US sanctions against the Russian central bank

Washington has banned any transactions with the Russian central bank with immediate effect, the Treasury Department announced before the opening of US markets.

In fact, this decision, in connection with similar sanctions taken by many allies of the United States, will severely limit Moscow’s ability to use its abundant foreign exchange reserves to buy rubles.

Faced with sanctions, the Russian currency on Monday broke historic records of weakness vis-à-vis the dollar and the euro.

The founder of the aluminum giant Rusal Oleg Deripaska called for an end to “state capitalism” in Russia, saying he was waiting for “clarifications” from the government on economic policy in the face of the crisis caused by Western sanctions.

Another oligarch, Oleg Tinkov, founder of the Tinkoff bank, deemed it “unthinkable and unacceptable” that “innocent people die every day” in Ukraine.

On Sunday, Russian billionaire Mikhail Fridman denounced the war in Ukraine in a letter to employees of his LetterOne fund.

One of Russia’s richest men, oligarch Roman Abramovich, was “contacted by Ukraine to help find a solution and has been trying to help ever since,” his door-keeper told AFP. lyrics by Rola Brentlin.

Russia has announced it is restricting airline flights from 36 countries in response to the closure of many states’ airspace to Russian planes.

The outcome of the conflict so far remains uncertain. Ukraine has reported some 200 civilians and dozens of military personnel killed since Thursday. Among the victims, 16 children.

The UN said on Monday it recorded 102 civilians killed, including 7 children, and 304 injured, but warned that the actual figures “are considerably” higher.

The Russian army admitted for the first time on Sunday that it had identified “dead” and “injured” in its invasion of Ukraine, without giving figures.

More than 500,000 people have left Ukraine to take refuge in several neighboring countries since the start of the Russian offensive on Thursday, the UN High Commissioner for Refugees Filippo Grandi tweeted on Monday.

Some 281,000 people have taken refuge in Poland, according to this latest count.