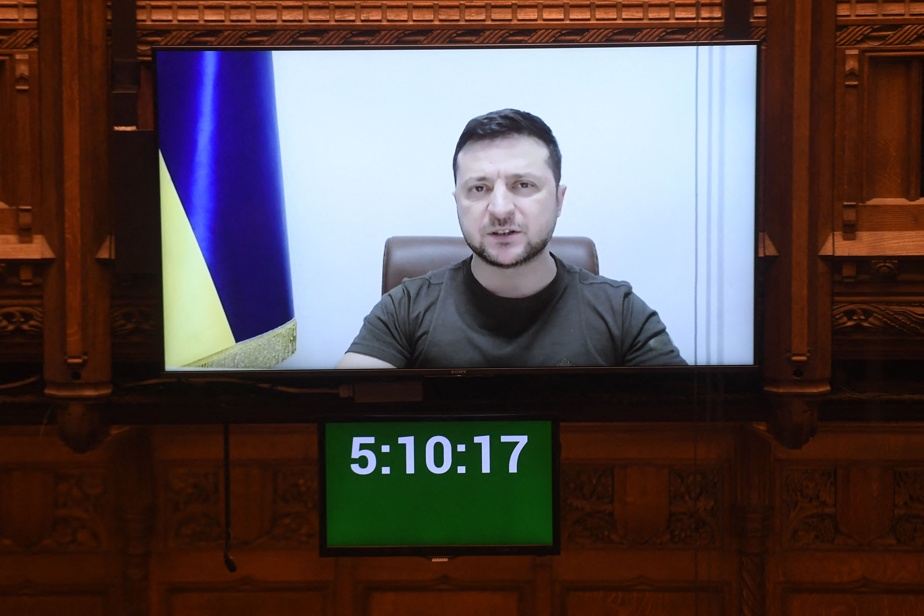 (London) “We will fight until the end,” Ukrainian President Volodymyr Zelensky said Tuesday, invoking former British Prime Minister Winston Churchill, in a moving speech, by video link from Kyiv, before the British parliament.

The Ukrainian president, in a khaki T-shirt and seated near a Ukrainian flag, read his text in front of a packed House of Commons, listened to attentively by the deputies who then rose for an ovation.

Since the first day of the Russian invasion, “we haven’t slept. We all fought for our country, with our army,” he said.

“We won’t give up and we won’t lose,” he said, telling the story of the Russian invasion day by day. “We will fight to the end, at sea, in the air. We will continue to fight for our land, no matter what, in the forests, in the fields, on the shores, in the streets,” he said.

This speech echoed that of Winston Churchill in the House of Commons in June 1940, after British forces were forced to withdraw from France in the face of German Nazi attack.

In response, Prime Minister Boris Johnson said that “never before in all our centuries of parliamentary democracy has the House listened to such an address”.

President Zelensky “touched the hearts of everyone in this House”, he said, pledging that the West was determined to continue arms supplies to Ukraine and sanctions against Russia.

“We will use all the methods we can – diplomatic, humanitarian and economic – until Vladimir Putin fails in this disastrous enterprise and Ukraine is free again,” added the conservative leader.

Mr Zelensky was speaking shortly after the British government announced that the United Kingdom would stop imports of Russian crude oil and petroleum products by the end of 2022 in response to the invasion of Ukraine.

Ukraine’s president has spoken daily with Western leaders since Russia invaded his country on February 24.

On March 5, he addressed the elected members of the American Congress by videoconference to ask for financial aid and for Soviet-made planes which Eastern European countries still have and which Ukrainian pilots have mastered. President Zelensky called on this occasion for a toughening of economic sanctions against Russia, in particular an embargo on imports of Russian oil and gas, which US President Joe Biden decreed on Tuesday.

During his speech in the British Parliament, the Ukrainian president, who was an actor before becoming president, also made reference to the playwright William Shakespeare.