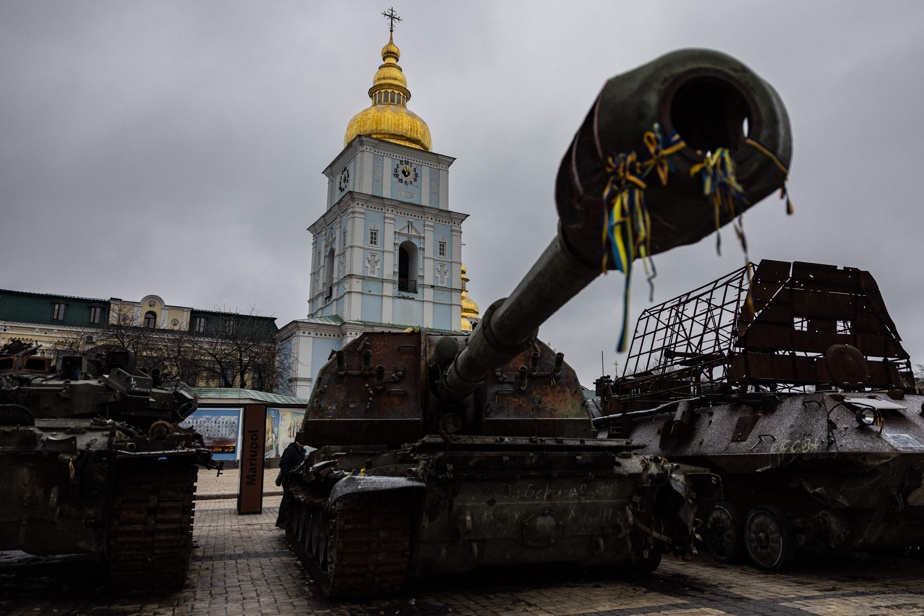 (Moscow) “Arrest the lord of Hell”: for several weeks, the Russian authorities have been trying to give a religious and sacred dimension to their offensive against Ukraine. But this rhetoric divides even within the Orthodox Church.

A sign of the importance for the Kremlin of the spiritual dimension it seeks to instill in its military intervention, Vladimir Putin affirmed, during his New Year’s greetings, that “moral correctness” was on Moscow’s side.

This claim illustrates the will of the authorities to iron out the doubts of part of the population thrown off balance by the entry of Russian troops into a country where the majority of believers are, as in Russia, Orthodox Christians.

As Moscow suffered several military setbacks, religious rhetoric gained increasing momentum from the fall, with senior officials and state media portraying the intervention in Ukraine as a ‘holy war’ against a West portrayed as decadent. .

At the beginning of November, ex-president Dmitry Medvedev, currently number two in the powerful Russian Security Council, thus affirmed that the “sacred objective” of the offensive was to “stop the lord of Hell”.

“We are fighting those who hate us, who ban our language, our values ​​and even our faith,” said Medvedev, for whom Russia’s enemies are Ukrainian “Nazis” and “dogs” of the West.

Beyond the speeches, the intertwining of the religious and the military is also manifested by the sending of dozens of priests to the front to support the soldiers.

Military priest Sviatoslav Tchourkanov explains to AFP that these missions aim to prevent soldiers from “losing their soul […]even if the situation pushes them to do so”.

A priest must “root in the soul of the military that prisoners should not be tortured […] We must not loot, we must not harm civilians,” he continued.

The cleric has no doubts about the merits of this assault on Ukraine, which, according to him, consists in defending the “traditional values” of which the Kremlin and the Russian Orthodox Church present themselves as the protectors.

“In Ukraine, even in wartime conditions, we organize ‘gay prides’ to show adherence to Western values”, the priest gets carried away, echoing the discourse of Russian power on the “decadent” West.

A sign of the importance of these clerics in the conflict, Mr. Putin awarded in November the title of “Hero of the Russian Federation”, the country’s highest distinction, to an Orthodox priest killed in the combat zone, Mikhail Vasiliev .

The powerful head of the Russian Orthodox Church, Patriarch Kirill, has also voiced support for the military offensive, saying support should be given to pro-Russian ‘brothers’ in eastern Ukraine who have ‘rejected’ Western values.

During a sermon at the end of September, he affirmed that those killed while fulfilling their “military duty” performed a “sacrifice which washes away all sins”.

For Nikita Astakhov, artistic director of the Russian Orthodox “spiritual” theater “Glas” (“The Voice”), which stages plays dealing with religious issues, “Russia has always stood up against evil”.

“Russia will never be defeated as long as more than half of the Russian population is Orthodox,” he told AFP.

But this involvement of the Church in the conflict and the increasingly religious rhetoric surrounding it are not unanimous in Russia.

“This rhetoric of ‘holy war’ comes straight from the Middle Ages,” said Andrei Kordotchkine, a priest of the Russian Orthodox Church stationed in Madrid, in an interview with AFP.

“It is exactly this term that was used by Pope Urban II when he blessed the crusade (launched in 1096), promising the crusaders that their sins would be forgiven,” he explains.

“But it is impossible to go back to the past. […] A war, which is a form of murder, cannot have any spiritual meaning,” he adds.

If the Moscow Patriarchate shows frank support for the military intervention, it has caused a stir within the Orthodox world, with a bitter struggle between the Russian and Ukrainian Orthodox Churches.

Even within the Russian clergy, there are differences: from the 1er March, a column against “fratricidal war” was signed by 293 Orthodox religious.

“It is not only (Russian) society that is divided, but also the Church and the clergy,” said priest Andrei Kordotchkine.

Several signatories of the text have been sanctioned by the patriarchy, confides one of them, on condition of anonymity. “Some have been moved from their parishes where they had served for years and replaced by priests loyal to power,” he said, calling the Russian offensive a “catastrophe”.

“In recent years, the links between the high Orthodox hierarchy and the power have been strengthened”, continues this priest. “The State has helped the Church a lot and this help has created a great dependency”.