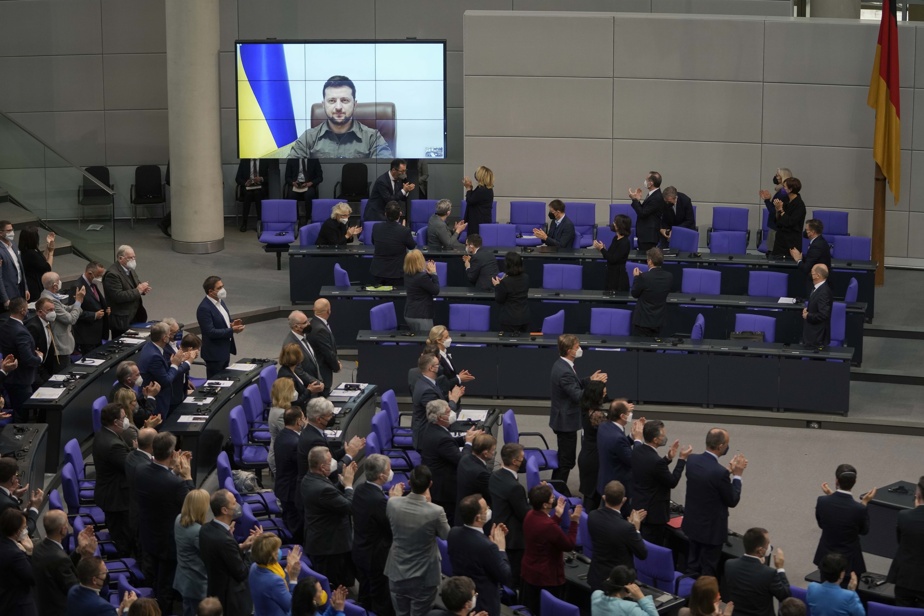 (Berlin) Ukrainian President Volodymyr Zelensky on Thursday urged Germany to tear down the new “wall” erected in Europe and called for help from an Olaf Scholz who was severely criticized for his reserve and the lack of breath in his response.

Like the day before before the American Congress, the Ukrainian president received a standing ovation from the Bundestag. But the maintenance of the regular agenda of the parliament, just after the intervention by video of Mr. Zelensky, and the absence of speech of Olaf Scholz in the hemicycle, caused unease in Germany.

“Dear Chancellor Scholz, tear down this Wall, give Germany the leadership role it deserves,” said the Ukrainian leader, who was addressing the lower house of the German parliament.

He thus drew a parallel with a historic speech by American President Ronald Reagan, who had launched in 1987 from the Brandenburg Gate in Berlin to the leader of the Soviet era Mikhail Gorbachev: “Tear down this wall” ). Two years later the Berlin Wall fell.

Mr. Zelensky deplored the erection of a new “wall” in Europe since the Russian invasion. “It is not a Berlin Wall but a Wall in Central Europe between freedom and servitude and this Wall grows bigger with each bomb” launched on a Ukrainian city, underlined the Ukrainian president.

“Each year, politicians repeat “never again”. And now we see that those words are just not worth anything. A people is being destroyed in Europe,” warned Zelensky, who said 108 children have been killed in Ukraine since the start of the offensive. “Help us stop this war”.

In his speech, the Ukrainian president regretted the close economic relations forged in recent years between Berlin and Moscow, in terms of energy in particular as with the Nord Stream 2 gas pipeline project.

These projects led by Germany and Russia, “it was the cement for the new Wall”, castigated Mr. Zelensky.

Ukraine has been opposed from the start to the Nord Stream 2 gas pipeline linking Russia and Germany, which was finally suspended when Vladimir Putin recognized the autonomy of the pro-Russian Ukrainian provinces.

The Ukrainian regime has also been urging Germany for many weeks to deliver weapons, which Berlin finally conceded after the Russian invasion launched just three weeks ago.

In the wake of Mr. Zelensky’s speech, the German Chancellor hailed the “hard-hitting words” of the Ukrainian President, without however responding directly to his requests.

“We feel compelled to do everything in our power to give diplomacy a chance and end the war,” the German head of government said in a simple tweet.

The fact that a debate on compulsory vaccination against COVID-19 is taking place in the wake of a debate and that Mr. Scholz is not speaking in the Bundestag, contrary to what Boris Johnson did before the House of Commons on March 8, was harshly criticized in the German media, some claiming to take over from very bitter ministers behind the scenes.

“It’s a dark day for the coalition and a disgrace for parliament,” said an editorial in the conservative daily Die Welt.

By embodying “Business as usual”, the Scholz government “risks causing historic shame”, abounded the news channel NTV, while at the same time thousands of Germans are mobilizing to participate in the reception of more than 160,000 refugees who arrived from Ukraine in the country.

“Today was the most shameful moment I have ever experienced in the Bundestag! tweeted Conservative MP Norbert Röttgen, a CDU executive and specialist in international relations.

Again questioned about the intervention of the Ukrainian president at the end of the afternoon, Mr. Scholz did not respond to Mr. Zelensky’s requests either.

“I want to tell you that Mr. Zelensky’s speech moved me a lot today, it’s something very special,” he said.