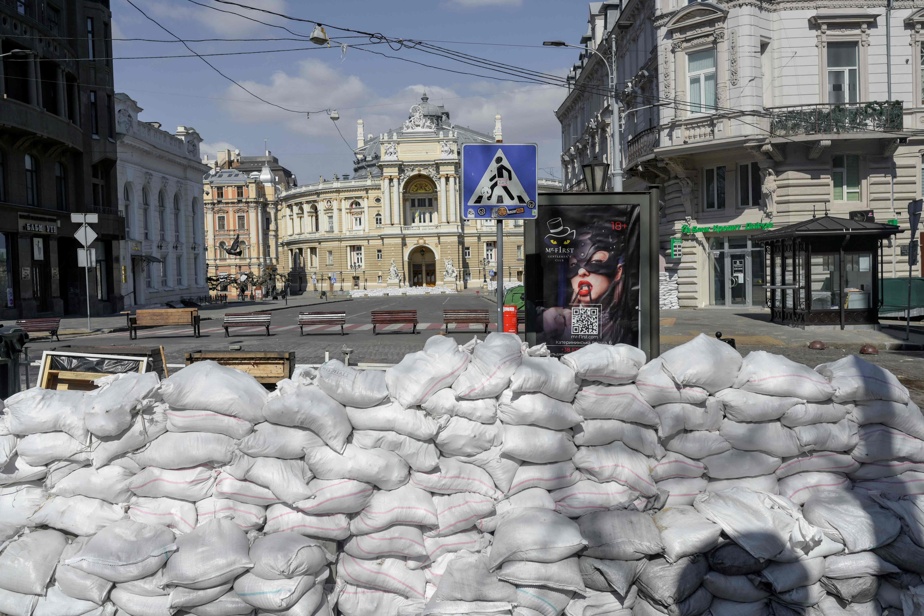 (Kyiv) Ukraine’s president on Thursday implored Westerners to help “stop this war” as a Russian strike left at least 27 dead in eastern Ukraine after a three-week Moscow offensive which gives no sign of respite despite the continuation of talks.

The perpetrators of war crimes in Ukraine will be “accountable” before international justice, for their part warned the G7 foreign ministers in a joint statement, stressing that the “collection of evidence” was in progress.

An accusation taken up by the head of American diplomacy: “Intentionally targeting civilians is a war crime. After so much destruction in the past three weeks, I find it difficult to conclude that the Russians are doing anything other than that,” Antony Blinken said Thursday in Washington.

Referring to the ongoing talks between Kyiv and Moscow, Mr. Blinken said that Russia had not shown “significant effort” so far.

“On the one hand, we salute Ukraine for remaining at the negotiating table while it is under bombardment, and on the other hand, I have not seen any significant effort from Russia to put an end through diplomacy to the war it is waging,” he said.

Mr. Blinken also assured that President Joe Biden would threaten his Chinese counterpart Xi Jinping, with whom he is to meet on Friday, with reprisals if China were to “support Russian aggression”, in particular by sending military aid to Moscow.

The Ukrainian president for his part launched: “a people is being destroyed in Europe”, addressing the German Bundestag by videoconference. “Help us stop this war!” he added, receiving a standing ovation from the deputies.

Ukraine has lived for three weeks to the rhythm of announcements of deadly Russian strikes on its cities, which it accuses the Kremlin of purposely targeting. Latest, an artillery strike killed at least 27 Thursday morning in Merefa, near the besieged city of Kharkiv.

“A school and a cultural center were destroyed. 21 people were killed and 25 injured, 10 of whom are in serious condition,” the regional prosecutor’s office announced.

Eyes were also turned Thursday to Mariupol, a port city in the south-east besieged and where Volodymyr Zelensky accused Wednesday the Russian air force of having “knowingly” bombed a theater where hundreds of inhabitants were refugees.

“The world must finally admit that Russia has become a terrorist state,” he added.

The town hall of this strategic port on the Sea of ​​Azov, according to which “more than a thousand” people were in an air-raid shelter under the theater, indicated Thursday afternoon that it did not yet know the results of this strike which largely destroyed the building.

The clearing of the rubble continues despite the incessant shelling, but “information on the victims is still being clarified”, the municipality said on Telegram.

Russia claimed not to have bombed the city, and claimed that the building had been destroyed by the Ukrainian nationalist Azov battalion.

According to the town hall of Mariupol however, the situation is “critical” with “uninterrupted” Russian bombardments and “colossal” destruction.

According to initial estimates, around 80% of the city’s housing stock was destroyed by the bombardments, the municipality added.

“More than 350,000 residents of Mariupol continue to hide in shelters and basements because of the continuous shelling,” the town hall said.

People who managed to flee said they melted snow to drink and cook what little food was available on braziers.

“They are firing so many rockets, there are a lot of bodies of dead civilians in the streets,” Tamara Kavounenko, 58, who lived in the city center, told AFP.

According to Iryna Vereshchuk, Ukrainian Deputy Prime Minister, 8 out of 9 humanitarian corridors functioned on Thursday and 3,810 civilians were evacuated from combat zones.

In Mariupol, residents leave the city by car and on foot. More than 2,000 people arrived from this town to Zaporozhye further northwest during the day. Evacuations also took place in the Kyiv region, while the Kharkiv corridor in the northeast did not work due to continued shooting, she said.

Since the beginning of the offensive on February 24, the Russian forces have not yet claimed the capture of any major Ukrainian city, even if they have clearly progressed in the south and seem to be advancing in the east of the country.

According to the NGO Human Rights Watch (HRW), the Russian forces notably used cluster bombs on March 7, 11 and 13, in the town of Mykolaiv, near Odessa. Nine people died on March 13, who were waiting in line at an ATM, according to the organization.

North of Kyiv, in Cherniguiv, ten people who were waiting to buy bread died when Russian forces opened fire, the Ukrainian General Prosecutor’s Office said on Wednesday. Moscow denied, accusing there too of “Ukrainian nationalists”.

The bombardments also continue on Kharkiv, the country’s second city, where at least 500 people have been killed since the start of the war.

The “whistle” of the bombs

In Kyiv, a strike on a building killed one person on Thursday at dawn.

“I heard a whistle, and my husband called me shouting. We live on the ground floor, the windows were breaking. The main thing is that we are alive, ”said Iryna Voinovska, 55, in tears. “Unfortunately, a woman died on the 16and floor, crushed by a gas cooker”.

The capital was slowly coming back to life on Thursday after the lifting of a curfew imposed since Tuesday evening.

But the streets, punctuated with checkpoints and sandbags, remained almost deserted. The city has been emptied of at least half of its 3.5 million inhabitants.

No overall assessment has ever been provided, even if President Zelensky mentioned on March 12 the death of “about 1300” Ukrainian soldiers, while Moscow only reported nearly 500 dead in its ranks on March 2.

One hundred and eight children have been killed and 120 injured in the country since the Russian invasion, the Ukrainian General Prosecutor’s Office said on Thursday.

The World Health Organization (WHO) denounces in particular the numerous strikes on health infrastructures.

More than three million Ukrainians have already taken the road to exile, the vast majority to Poland. Thousands of them continue their journey to other countries, such as Sweden: Stockholm estimates that they arrive at the rate of nearly 4,000 people a day, and does not rule out receiving up to 200,000.

Vladimir Putin hammered Wednesday in a speech that the offensive was “a success”. His spokesman, Dmitry Peskov, said the “overwhelming majority” of Russians supported the line decided by Vladimir Putin.

The others are “traitors”, and the conflict reveals them, allowing a “purification” of society, he added, while many Russians opposed to the Kremlin have left the country since the start of the offensive.

Despite the determination displayed by the two camps, talks are continuing in parallel by videoconference at the level of delegations.

Turkish Foreign Minister Mevlut Cavusoglu, visiting Lviv in western Ukraine, said that Kyiv had “made an offer on the collective security agreement: P5 (the five permanent members of the Security Council , editor’s note), plus Turkey and Germany”.

“During my contacts in Moscow yesterday, I saw that the Russian Federation […] could accept such an offer,” said the minister.

The day before, Ukraine had rejected the Russian proposal for a simple status as a neutral country, demanding “absolute security guarantees”.

Hit by heavy sanctions, Russia has however apparently escaped default on its debt for the moment: according to a source familiar with the matter, the bank JPMorgan has indeed received payment of an interest tranche of 117.2 million dollars that was coming due.