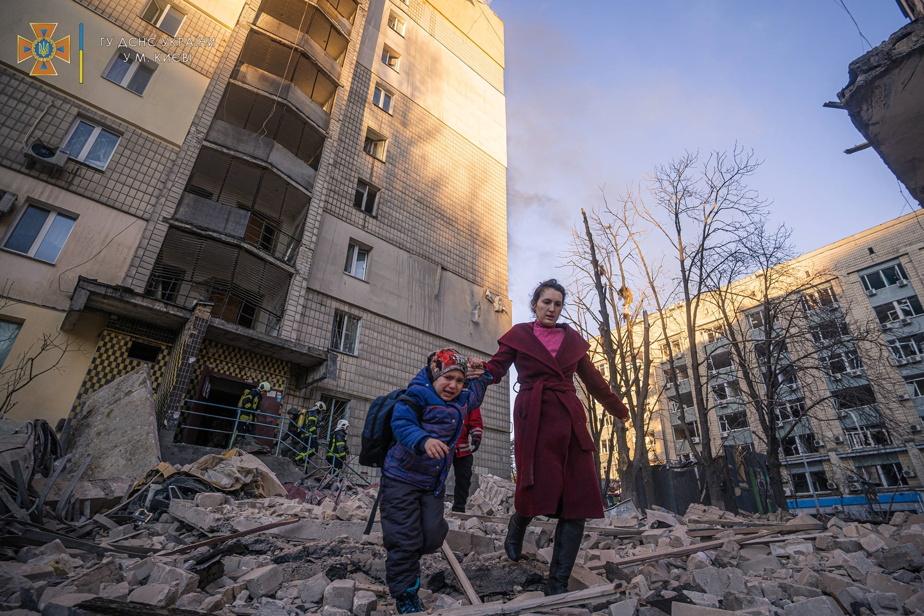 (Kyiv) Vladimir Putin assured Wednesday that the Russian invasion of Ukraine was “a success”, his counterpart Volodymyr Zelensky launching him a new vibrant appeal for help, in full negotiations on a possible Ukrainian neutrality.

The military operation launched on February 24 is “a success”, hammered the Russian president in a speech strongly defending the invasion, and this while the Russian army cannot claim the capture of any major city in the country.

Russia will never let Ukraine become a “beachhead” for “aggressive actions” against Russia, he added.

Just before, President Zelensky had launched a vibrant appeal for help to the American Congress by videoconference. Appreciated, he again called for the establishment of a no-fly zone over Ukraine.

“I have a need, the need to protect our sky. I need your decision, your help,” he said. “Is it too much to ask to create a no-fly zone […] to save people? Is it asking too much, a humanitarian no-fly zone? “, he added, before projecting images of Ukrainians under the bombs.

“Remember Pearl Harbor, that dreadful morning of December 7, 1941, when your skies were darkened by planes attacking you, […] remember September 11, that terrible day in 2001,” he said. “This terror, Europe has not experienced it for 80 years”.

US President Joe Biden has so far rejected a no-fly zone for fear of the US and NATO being drawn into a conflict that could turn into 3and world War.

He was nevertheless to announce Wednesday afternoon a new security assistance of 800 million dollars to help Kyiv.

These statements by the two presidents come against a backdrop of intensified Russian strikes on Ukrainian cities in recent days, even if the progress of Moscow’s forces seems to be slowing down.

More than three million Ukrainians – almost half of them children – have already taken the road to exile, the vast majority to Poland.

The capital Kyiv, emptied of more than half of its 3.5 million inhabitants, has been under curfew since 8 p.m. Tuesday (6 p.m. GMT) and until Thursday 7 a.m., after several missiles hit buildings residential Monday and Tuesday.

Several explosions were heard again at dawn on Wednesday. Thick columns of black smoke rose shortly after above the city, like the day before.

In the city of Cherniguiv, north of Kyiv, ten people who were queuing to buy bread were shot dead on Wednesday, the Ukrainian prosecutor’s office said.

And more than 500 people have died since the start of the war in the country’s second city, Kharkiv, near the Russian border, which has been bombarded relentlessly, according to Ukrainian relief.

Thousands of people are still trapped under the bombardments in Mariupol, holed up in cellars, even if some 20,000 people were able to leave this strategic port on the Sea of ​​Azov on Tuesday, besieged for days, in the direction of Zaporozhye, more than 200 km northwest.

But this city of refuge has for the first time since the beginning of the conflict been targeted, the station having been hit on Wednesday by at least one missile, apparently without causing any casualties, according to the regional governor. It is in this region that the largest nuclear power plant in Europe is located, which the Russians have occupied since March 4.

The offensive and the determination of the two camps do not prevent the pursuit in parallel of talks, relaunched Monday by videoconference at the level of the delegations.

Kremlin spokesman Dmitry Peskov said Wednesday that negotiators were now discussing “a compromise” that would make Ukraine a neutral country, on the model of Sweden and Austria.

“There are very concrete formulas which, I think, are close to an agreement”, also affirmed the head of Russian diplomacy Sergei Lavrov, stressing that the talks “are not easy”.

Without denying discussions on neutrality, the Ukrainian chief negotiator rejected “a Swedish or Austrian model” and insisted on “absolute security guarantees” vis-à-vis Russia, whose signatories would undertake to intervene alongside Ukraine in case of aggression.

“Ukraine is now in a state of direct war with Russia. Therefore, the model can only be ‘Ukrainian’,” Mykhaïlo Podoliak said on his Telegram account.

President Zelensky had estimated on Tuesday night that the positions of the two camps were now “more realistic”, while considering that it would take “still time for the decisions to be in the interest of Ukraine”.

He had previously said he was ready to renounce any membership of his country in NATO, a casus belli for Russia.

Mr. Zelensky did not hide that he also hoped to obtain a meeting with Mr. Putin.

“There is no obstacle to the organization of such a meeting”, indicated Mr. Lavrov on Wednesday, as long as “it is not just to take a photo for the internet. There must be real added value […] for conflict resolution.

After a meeting, the heads of the Catholic and Russian Orthodox Churches, Pope Francis and Patriarch Kirill, “underscored the crucial importance of the ongoing negotiation process, expressing the hope of quickly arriving at a just peace”, indicated the Moscow Patriarchate.

On the diplomatic front, Turkey, a NATO member country but having refused to join in the sanctions against Moscow, is continuing its mediation efforts. Turkish Foreign Minister Mevlüt Cavusoglu was in Moscow on Wednesday, and was due to travel to Ukraine on Thursday.

He will succeed the Polish, Czech and Slovenian prime ministers. MM. Mateusz Morawiecki, Petr Fiala and Janez Jansa traveled to Kyiv on Tuesday, after a long journey by train, to assure the Ukrainian president of their support.

At the same time, Poland has called for the establishment of a NATO “peace mission”, “protected by the armed forces” to come to the aid of Ukraine.

The subject could be discussed at the extraordinary NATO summit scheduled for March 24 in Brussels, where Joe Biden will go.

Failing to intervene directly militarily, the West continues to supply arms to Ukraine and to toughen their sanctions.

On Wednesday, Vladimir Putin pledged financial aid to individuals and businesses, calling the sanctions a “blitzkrieg” against Russia. He also compared Western condemnations and exclusions of athletes and the Russian cultural world to “anti-Semitic pogroms”.

The Russian authorities continue in parallel to repress any opposition to the war.

After the arrest of an employee of Russian Channel One who had protested against the war by bursting into the television news set on Monday evening, the authorities blocked the sites of around 30 additional media, including the site of Bellingcat research.