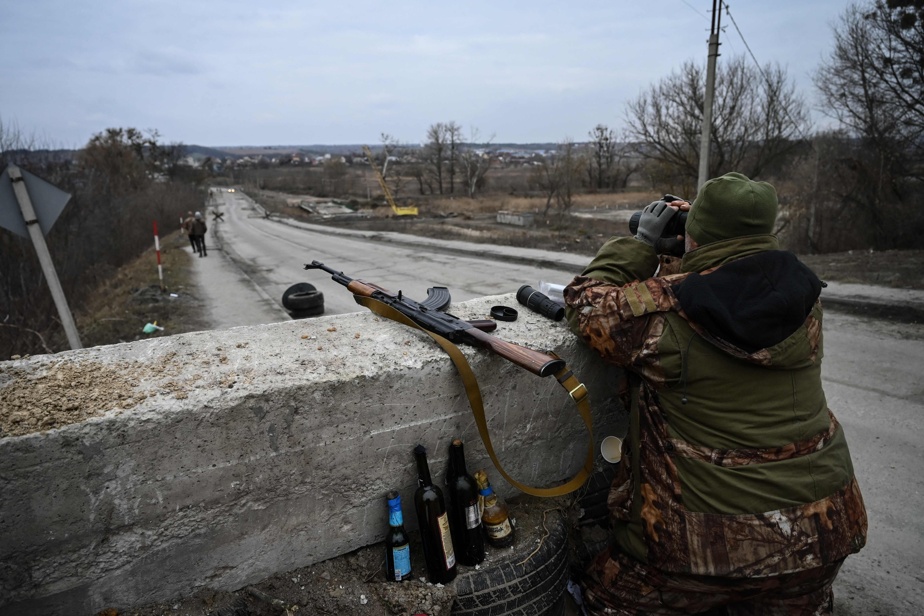 (Bilogorodka) Sergeant “Casper”, of the Ukrainian volunteer units, stands ready to blow up, with a heavy heart, the last bridge still standing, completely mined, which connects Kyiv to its hinterland where the forces are advancing Russians.

His comrades blew up all the other bridges on the western flank of the Ukrainian capital, in a desperate attempt to halt the advancing Russian tanks.

The only bridge still standing, which spans a river in the town of Bilogorodka, 25 km west of the capital, leads to green villages with many summer residences, now a war zone.

The city of Kyiv would be cut off from its western hinterland if Casper were ordered to blow up the bridge.

“We will try everything to keep him upright,” the former paratrooper told AFP.

But the fighting that is approaching darkens the morale of the Ukrainians who hold the barricades. Russian warplanes have joined ground troops and are bombarding surrounding villages and towns.

The human tide fleeing the approach of the fighting seems endless. And the few rare hours of silence between strikes have Ukrainian soldiers fearing that Russian forces are actually preparing for even more violent offensives.

Casper observes the Ukrainian surveillance drone flying over the front line and recognizes that he may soon be forced to destroy the last bridge that still connects his surroundings to the west.

“If we get the order from above, or if we see the Russians advancing, we’ll blow it up…with as many enemy tanks as possible,” he said.

With the fighting on the outskirts of Kyiv, the streets are becoming increasingly dangerous and deserted by day.

Thanks to another advance of Russian forces on the eastern banks of the Dnieper, the river that waters Kyiv, troops have moved closer to some 50 km.

But the western sector offers Russian forces more direct access to the center of the capital and to the district that houses the seat of government.

Residents are preparing for guerrilla warfare, like Oleksandr Fedchenko, 38, a mechanic.

Mr. Fedchenko hosted in his spare time the filming of the TV show devoted to the most popular cars in Ukraine.

But he turned his vast garage into a clandestine weapons manufacturing center to equip Ukrainian volunteer units.

“When the war started, everything changed,” he says.

“We discovered that our mechanics knew how to make weapons. Others know how to make Molotov cocktails. We are doing absolutely everything we can,” says the mechanic.

“This may be our last day”

All the employees of Mr. Fedchenko’s auto repair shop have swapped their oil-stained coveralls for the olive-green uniforms of the volunteer units.

A 28-year-old mechanic, a new volunteer fighter who has chosen “Cross” as his nom de guerre; does welding work on a large caliber machine gun that Ukrainian soldiers recovered by seizing a Russian tank.

He attempts to turn the machine gun into a portable weapon that an untrained volunteer would be able to use in street fights.

“This thing may not shoot very straight, but it’s better than nothing,” he comments.

“How many people know we’re doing this and maybe it’s not very legal,” he continues. “But when there is a war, what is legal no longer matters, only our national defense matters.”

Mr. Fedchenko’s voice cracks when he talks about the launch of the Russian offensive on February 24.

“I felt helpless. Put a Kalashnikov in my hands, I won’t last 10 minutes. But I needed to do something”.

His improvised weapons factory is dangerously exposed to a potential Russian strike.

His gigantic garage is indeed on a road at the western end of Kyiv. Many industrial buildings on this same road are now in ruins.

“Everyone knows here that we can be attacked at any time,” said the mechanic. “Everyone knows that this may be our last day. But we are still coming”.

Retired Ganna Galnychenko, 64, also has tears in her eyes. She walked alone from the fields marking no man’s land between the bridge guarded by Casper and the villages that Russian forces have taken over.

“I don’t know where my children are. I can’t reach them on the phone,” she said, her voice shaking.