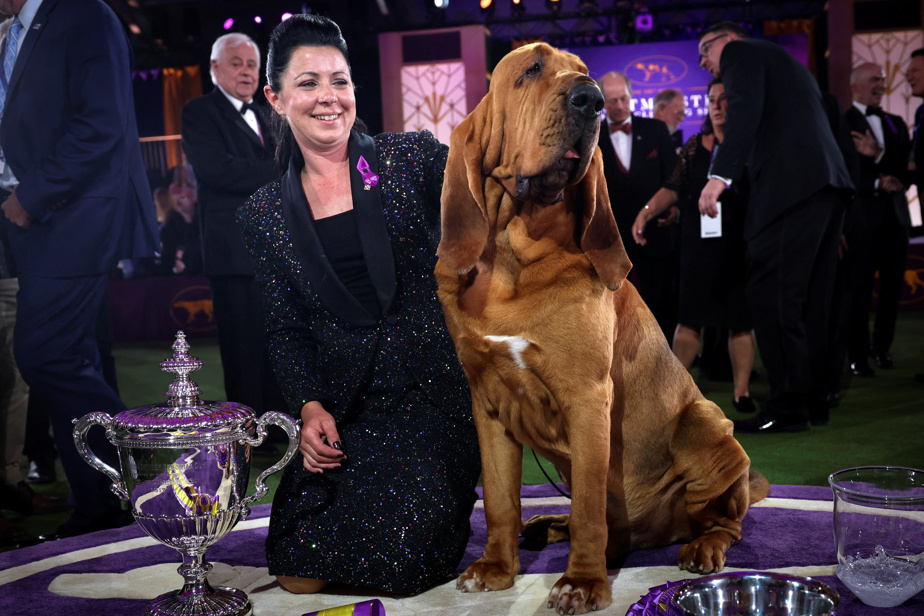 (Tarrytown) A dog from Saint-Hubert named Trumpet became the first representative of his breed on Wednesday evening to win the highest honor in the canine world, that of grand champion of the prestigious Westminster competition.

After his win, Trumpet patiently posed for countless photos, but eventually his instincts kicked in and he started sniffling all over the place. He examined decorative flowers that had been set up for photos, but found nothing of interest.

French bulldog Winston, which is notably owned by professional football player Morgan Fox, took second place. The Samoyed Striker was back in the final for a second consecutive year.

The competition attracted over 3,000 purebred dogs, from Affenpinschers to Yorkshire Terriers. The objective is to crown the dog that best embodies the ideal characteristics of its breed.

The prestigious Westminster Dog Show is usually held in winter at Madison Square Garden in New York. He moved to the Lyndhurst mansion, on the outskirts of the metropolis, last year and this year due to the pandemic.

Some dogs, like the golden retriever, compete against dozens of other representatives of their breed, just to have the honor of participating in the grand final.

Others may have felt alone: ​​Ooma was the only chinook, a sled dog, to enter the contest. The breed is quite rare in the United States, although the chinook is New Hampshire’s official dog.

Even for those who left without a ribbon or a trophy, the competition was a great opportunity to showcase what they are capable of.

The Brittany Spaniel Britanny and his mistress, Dr. Jessica Sielawa, participated together in their first dog show. But outside the ring, Britanny accompanies Dr. Sielawa to her chiropractic clinic in Syracuse, New York, “where she really helps people relieve their emotional stress,” Dr. Sielawa said.

She now intends to certify Britanny as a therapy dog.