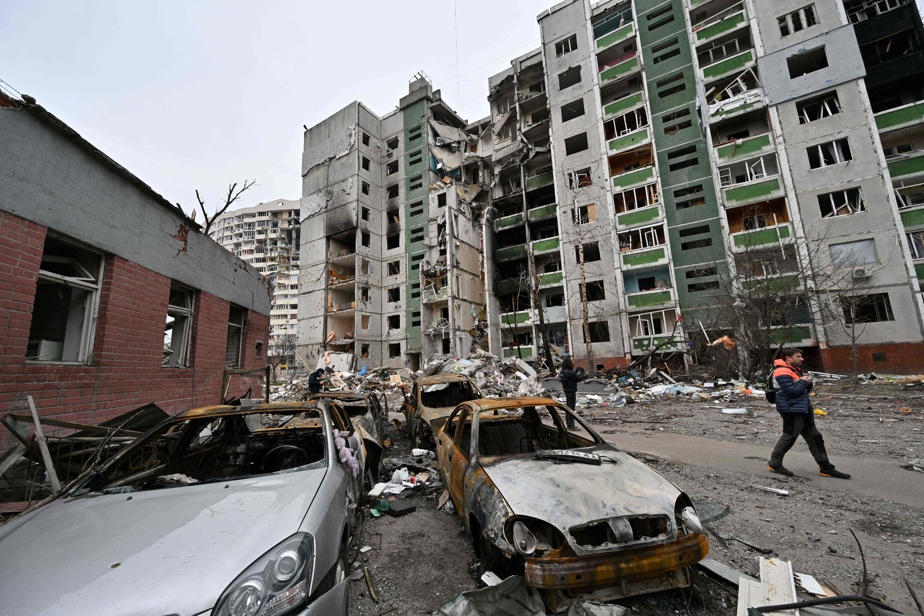 (Kramatorsk) A new Western salvo against Moscow is expected on Wednesday after accusations of war crimes against Russia in Ukraine, where a major Russian offensive is expected in the east of the country, now a priority target of the Kremlin.

After several sets of measures in response to Moscow’s invasion of Ukraine, the United States must adopt during the day, in coordination with the European Union and the G7, new sanctions against Russia aimed in particular at prohibiting ” any new investment” in this country, according to a source familiar with the matter.

The situation in Ukraine will also be on the menu of the meeting on Wednesday and Thursday in Brussels of the Foreign Ministers of the NATO countries, who must notably discuss with their Ukrainian counterpart Dmytro Kouleba the needs of the Ukrainian forces.

“I don’t want to give details, but the supply of anti-tank weapons and air defense systems is being considered,” Alliance Secretary General Jens Stoltenberg said.

NATO only intervenes militarily to defend its members when one of them is attacked or under UN mandate. Ukraine is not a member, and it is in particular a possible membership that Russian President Vladimir Putin has put forward to justify the invasion of this former Soviet republic. But nothing prevents the thirty countries of the Alliance from providing assistance.

These new steps against Moscow come the day after another impassioned appeal by Ukrainian President Volodymyr Zelensky, who urged at a meeting of the UN Security Council to act “immediately” against Russia in view of its “crimes of war” committed according to him in Ukraine.

The Ukrainian president notably had dramatic images projected before the diplomats showing numerous corpses, according to Kyiv, of civilian victims of abuses, filmed in localities recently evacuated by the Russian army, which is regrouping towards the eastern areas. from the country.

Pope Francis on Wednesday lambasted “ever more horrible cruelty (including) against civilians, women and children”.

The Ukrainian authorities affirm for their part that Boutcha “is not the worst”, fearing the discovery of other massacres.

Moscow rejects any accusation of abuses, accusing the Ukrainian authorities of preparing “stagings” of civilians killed in several cities to condemn the Kremlin.

But the discovery of victims, particularly in the locality of Boutcha, near Kyiv, created a shock wave and led the European Union and Washington to intensify their economic and diplomatic pressure on Moscow, already targeted by a thick layer of sanctions decided around the world.

On the ground, Moscow’s new strategy of concentrating efforts on Donbass, a region partly held since 2014 by pro-Russian separatists, continues to be put in place.

“Russian troops […] will rearm, receive reinforcements in numbers, because they have suffered a lot of losses, and resupply to launch a new, highly concentrated offensive in the Donbass region,” Stoltenberg warned on Tuesday, referring to “a crucial phase of the war. “.

Governor of the Luhansk region, Sergey Gaidai, called on residents to leave the region: “Evacuate while it’s safe […] As long as there are buses and trains, take advantage of this possibility. Yesterday the Russians damaged rail communications in the Donetsk region. Repairs took several hours, trains were delayed […] it is still a signal of danger. Get yourself and your loved ones to safety.”

Along a road linking the town of Izium, recently taken by Russian forces, to the twin towns of Sloviansk and Kramatorsk, capital of Kyiv-controlled Donbass, Ukrainian forces are preparing, AFP journalists have noted.

Trenches dug with bulldozers, artillery pieces and other more or less buried armored vehicles dot the surroundings. The forest, where soft flowerbeds of purple bells herald spring, is riddled with shelters and other camouflaged equipment promising much more sinister showers of fire.

The fortified road is cluttered with anti-tank obstacles. As the winter is over, and the sodden black earth limits the progression of the tanks in the neighboring cultures, it is necessary to hold the asphalt.

“The Russians are busy, we know they are preparing to attack,” said a senior officer, referring to an increase in Russian helicopter flights over the front.

” We are ready. […] We have prepared a few surprises for them”, comments this robust veteran of the 2014 war, wounded twice, who “almost lost his right leg” and now walks like a guy.

Krasnopillia, with its country houses with enclosures and windows with wooden transoms, is full of soldiers, members of the 95and Airmobile Brigade, an elite unit with the eagle as its emblem. Do they fear the coming Russian hurricane? “You know the story of David and Goliath…”, replies the officer.

Further on, Ukrainian logistics are also targeted, such as this oil depot in Novomoskovsk, near Dnipro, bombed and destroyed by the Russian army overnight from Tuesday to Wednesday, without causing any casualties, according to the authorities. local.

The Russian Ministry of Defense for its part indicated that the Russian forces destroyed with missiles five fuel depots in Novomoskovsk, Radekhov, Kazatine, Prossianaïa and Mykolaiv. These depots supplied the Ukrainian forces in the regions of Kharkiv and Mykolaiv, as well as in the Donbass.

During the night from Tuesday to Wednesday, Russian airstrikes targeted 24 Ukrainian military sites, including five depots of technical equipment, according to a press release from the ministry.

Russian forces are also still seeking to consolidate their positions on the coastal strip along the Sea of ​​Azov in southern Ukraine to connect the Donbass regions to the Crimean Peninsula, annexed by Moscow in 2014.

The fighting is still focused in particular on the large port city of Mariupol, whose mayor described the situation to AFP on Tuesday as having “passed the stage of a humanitarian disaster”.

The Russian military said on Tuesday it shot down two Ukrainian helicopters seeking to evacuate leaders of a nationalist battalion defending the besieged port, again calling on the defenders to lay down their arms.

Some 120,000 residents are still stuck there, according to the mayor, and the evacuees, after a grueling journey of 200 kilometers, find themselves in reception centers in Zaporijjia, inland.

Angela Berg, an energetic 55-year-old woman with short hair, left everything in the hell of Mariupol, including her mother, who was too old to undertake this journey.

“A man armed with a submachine gun forced us to lie on the ground in front of our 12-storey building, on pieces of broken glass. Then they started shooting at it with tanks, the building caught fire. And the man with the submachine gun was shooting at people who were trying to get out,” she told AFP.

“They didn’t let us collect anything until everything was burned, neither belongings nor documents.” And her voice breaks at the mention of her mother and her invalid sister-in-law whom she had to abandon to save the rest of her family, including her sick 3-month-old granddaughter: “She is the most painful decision I have ever made. I had to choose between my mother and my grandchildren”.