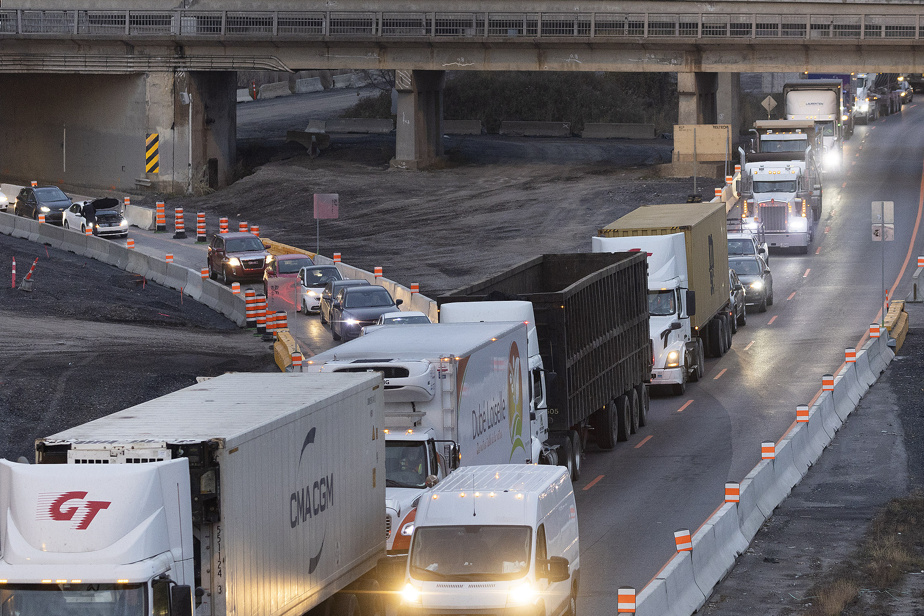 On the second day of the mega-construction site, traffic was again fairly fluid on Tuesday morning around the Louis-Hippolyte-La Fontaine tunnel, but much less on several key axes, including Highway 15, Highway 40 and the Décarie axis. . In the evening, the waiting time was longer towards the South Shore, as the major construction site approached, but all in all reasonable in the context.

The Press took 31 minutes to cross the tunnel from Montreal, at the Souligny Avenue approach, to Marie-Victorin Park in Longueuil, despite traffic being allowed in only one lane. This is a fairly normal journey time compared to the average. In the other direction, our travel time was barely 22 minutes to go to the Galeries d’Anjou, back on the island.

On the way back to Montreal, the traffic was particularly fluid, our vehicle having practically never had to stop. Earlier, a large rock that fell from a truck on the way caused a bit of congestion momentarily, but the whole thing seems to have cleared up quickly.

At the end of the day on Tuesday, the wait time exceeded forty minutes to cross the bridge-tunnel southbound from the Anjou interchange, but after 6 p.m., the congestion had subsided.

Back for a second consecutive day at the Montreal Integrated Traffic Management Center (CIGC) on Tuesday morning, the new Minister of Transport, Geneviève Guilbault, clearly mentioned on Twitter “traffic comparable to normal” near the La Fountain. The elected official, however, again invited commuters to find a plan B to have “optimal long-term travel”.

The Mayor of Montreal Valérie Plante was in the morning at the Urban Mobility Management Center (CGMU). “Our teams are hard at work to make your travels smoother,” she said.

Many experts have indeed warned in The Press that it is still too early to rejoice. This is because the congestion could take a few days, or even a few weeks, to appear, given the shorter-term reaction of the population to the launch of the megaconstruction site. In other words, the question remains whether users will opt for other modes of transport when they return en masse.

The spokesperson for the Ministry of Transport (MTQ), Louis-André Bertrand, clarified on Tuesday that the day will once again be “not necessarily representative”, due to the pedagogical days in several schools in Greater Montreal, which probably facilitate part the traffic. There is also a break in some private schools this week.

“Wednesday, the afternoon peak, is our biggest peak of the week, followed closely by Thursday afternoon. I think we will have a more reliable portrait in the coming weeks, but we expect that tomorrow, with the pedagogical days and Halloween behind us, people will perhaps take the road more, “said he said in a telephone interview.

More painful elsewhere on the island

Tuesday morning, however, the situation was a little more difficult on the Samuel-De Champlain Bridge, where traffic was driving back in particular “from Highway 10, to the interchange with 30,” reported the spokesperson. of the Signature Group on the Saint-Lawrence (GSSL), Martin Chamberland, specifying that congestion was also observed near the bridge, particularly in the La Prairie sector.

“It remained, despite everything, quite normal. The bridge was fluid. For us, it’s kind of normal friction and congestion. We are still far from a catastrophic situation for the moment,” continued Mr. Chamberland.

The government platform, Temps La Fontaine, also reported in the morning an average time of 56 minutes in the sector of the intersection with Highway 25, which leads to the tunnel. The Metropolitan Autoroute was also heavily congested between 25 and 15, westbound. The Décarie axis was also strongly blocked in a northerly direction, as was Highway 10 in several sectors.

On the North Shore, Highway 15 was also blocked southbound, from Boisbriand to the Metropolitan Highway.

An accident also caused a significant slowdown further west, on the Honoré-Mercier Bridge, at the start of the day during rush hour. On the Jacques-Cartier and Victoria bridges, traffic was very fluid from the start of the day. At the exit of the Jacques-Cartier bridge, on the island of Montreal and in Longueuil, obstacles were however present in several sectors on the local network of the two municipalities.

With Vincent Larin, The Press