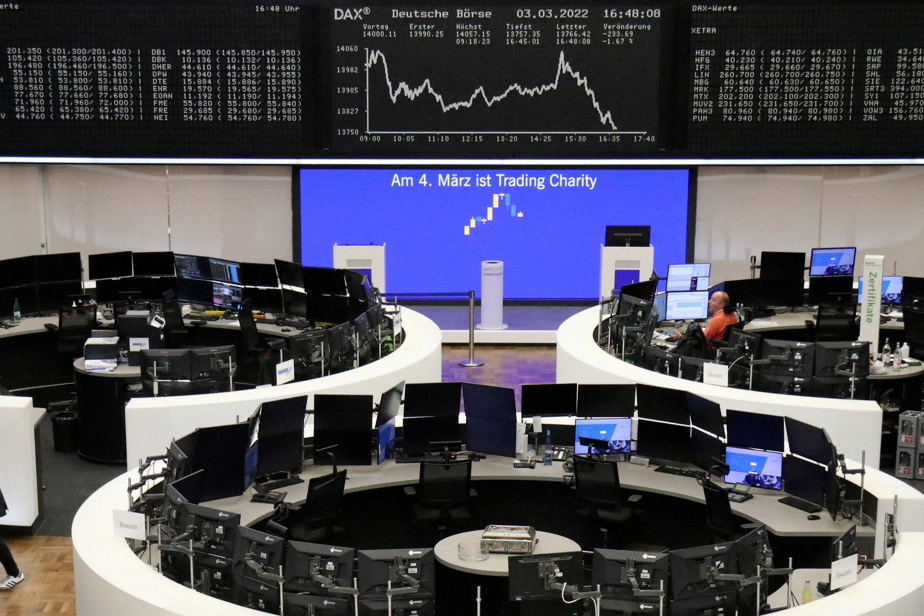 The price of a barrel of Brent from the North Sea came close to 140 dollars on Sunday evening, close to its absolute record of 147.50 dollars dating from July 2008.

After declines of more than 4% at the start of the day, European stock markets reduced their losses, reassured by a new round of negotiations between Russia and Ukraine. Around 7:30 a.m., Frankfurt dropped 1.31%, Paris 0.86%, Milan 0.24% and London 0.43%.

In New York, futures contracts for the three main indices lost around 0.6%.

Asian markets also lost between 2% and 3%.

Faced with the escalation of the war in Ukraine, the United States is considering banning imports of Russian oil. A possibility under discussion with the European Union. Germany, for its part, opposes an embargo on Russian gas, oil and coal.

“The threat of sanctions has already wiped out almost all Russian oil from the world market, ie 7% of world supply,” said Jochen Stanzl, for CMC Market.

Sanctions on Russian oil exports would have a “ripple effect on European economies”, “reducing supply on the world market, increasing prices for industries and making the rising cost of living even more painful”, details Susannah Streeter, analyst at Hargreaves Lansdown.

The International Monetary Fund (IMF) for its part warned that the sanctions against Russia would have a “substantial impact” on the world economy and “collateral effects for other countries”.

The price of the benchmark European gas contract also jumped 50%, and hit a new record at 345 euros per megawatt hour.

Metal prices continued to rise: aluminum broke through the $4,000 per ton mark for the first time. Copper and palladium hit new all-time highs.

Milling wheat also rose by more than 13% to reach 446 euros per tonne on the European market.

The risk of economic slowdown and high inflation constitute a “toxic cocktail” and “a huge problem” for “central banks”, assures Michael Hewson, of CMC Markets. Starting with the European Central Bank (ECB) which will meet on Thursday.

According to Vincent Boy, an IG France analyst, the ECB could be tougher on its monetary policy “in order to counter inflation, but also to stem the fall of the euro against the dollar”.

The Russian currency was still melting by 11% after hitting a new all-time low. Since 1er January, the ruble tumbled 45%.

Auto, bank and travel among the most penalized

The automotive sector was also battered. In Paris, car manufacturers Renault and Stellantis, which operate factories in Russia, yielded 4.11% and 5.89% respectively. In Frankfurt, BMW fell by 3.91% and Volkswagen by 4.9%.