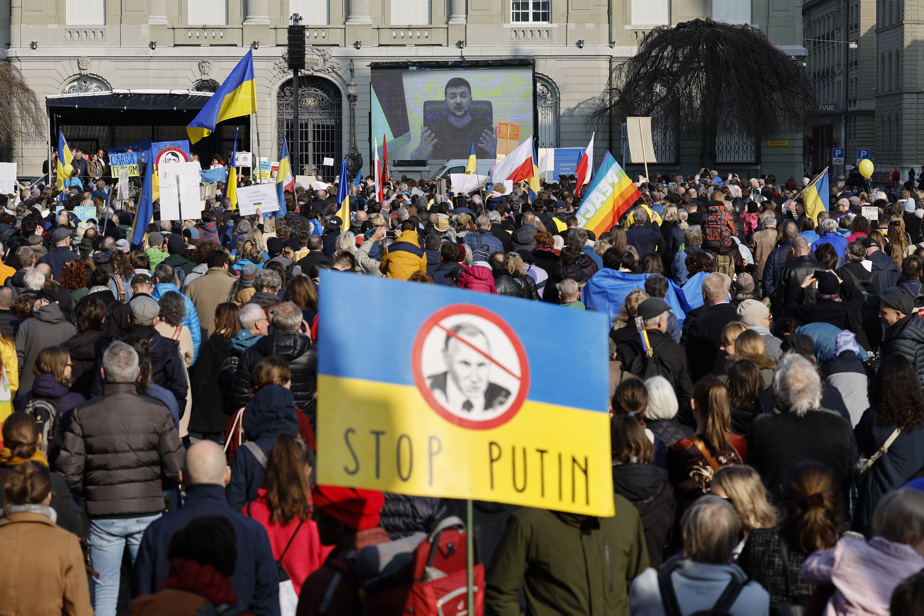 (Bern) Ukrainian President Volodymyr Zelensky spoke directly to the Swiss on Saturday with Bern, blaming companies which, like Nestlé, continue their activities in Russia despite the war and calling for the freezing of the assets of those close to the Kremlin in Swiss banks.

In a live video address from Kyiv to thousands of people gathered outside the Swiss Parliament in Bern, Mr Zelensky criticized Swiss companies, including Nestle, for continuing to operate in Russia.

” Eat well. Live well”, is the slogan of Nestlé. Your company refusing to leave Russia. Even now, when Russia threatens other European countries. Not just us,” Zelensky said.

“Business is good in Russia even when our children are dying and our cities are demolished” and when the inhabitants of Mariupol, a besieged Ukrainian city, are “without food, without water, without electricity and under the bombardments”, he castigated .

Participants in the rally, including Swiss President Ignazio Cassis on stage with Ukrainian diplomats, were able to follow his nine-minute speech, translated into German, despite temporary technical problems.

On stage floated a banner reading “Solidarity with Ukraine. Stop the war now”.

“It hurts,” Mr. Zelensky continued, of the banks. “The money of the people who started this war is in your banks. Help us fight this. For these funds to be frozen, ”he pleaded.

“It is necessary to completely freeze the assets of these people and their bank accounts. It’s a big fight, but you can do it,” Mr. Zelensky said.

Appreciated, he demanded that Russian officials be stripped of their properties and privileges. The number of wealthy Russians residing in Switzerland has increased in recent years.

“I am deeply impressed, dear Volodymyr, by your will to resist”, replied, in English, Swiss President Ignazio Cassis, who is to go to the border between Poland and Ukraine on Monday.